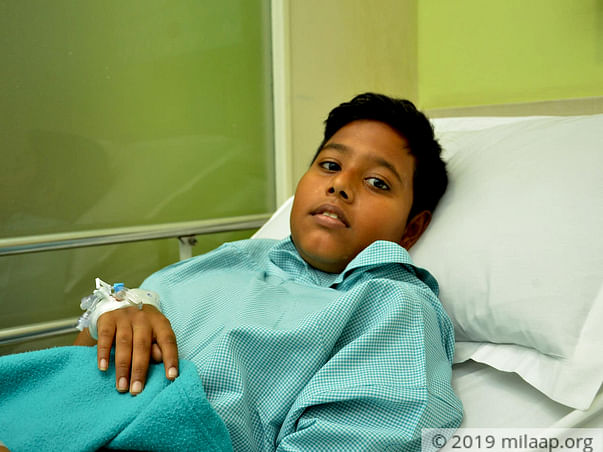 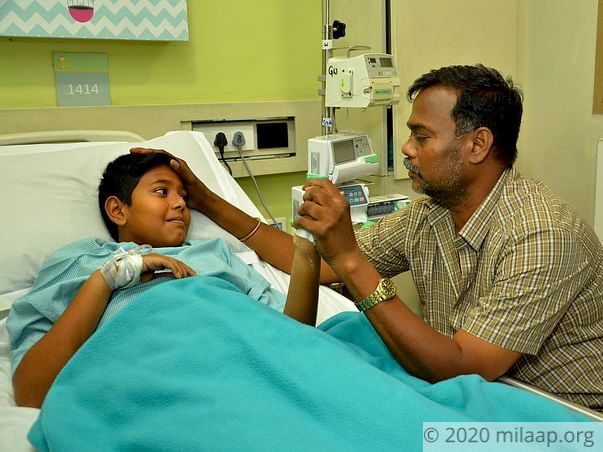 “One minute, he is helping his younger brother with Math homework. The next minute he does not even remember his own name.” – Anbuchezhiyan

Revathi and Anbuchezhiyan do not leave their 11-year-old son, Surendiran unattended even for a moment. He has a brain disease that often causes seizures and memory loss. He can be cured, and has already shown 30% progress with the first cycle of the treatment. His parents need your help to cure their son completely.

‘I think I have a bomb in my head’

Surendiran has Large Cerebellar Arteriovenous Malformation. It is like a dam of tangled up blood vessels that connect the arteries and veins in the brain. It is indeed like a ticking bomb. High BP can cause hemorrhage of these blood vessels.

“Surendiran came to me crying. He said his head is aching so badly that he thinks there is a bomb inside. In a few minutes, he got seizures and fell unconscious. We had to go to a neurospecialist in Chennai.” - Revathi

'He could just hurt himself or worse, drop dead'

Surendiran’s disease is a birth defect. The family could not have known before. He only complained of terrible headaches, which they attributed to watching TV or playing games on the mobile. Now, the disease is causing seizures, loss of control over movements, change in his behavior and cognition.

“The seizures are under control with medicines but he keeps fall unconscious from the headaches. He could hurt himself if we don’t watch him constantly. He is also losing his memory.” - Revathi

'He does not know the truth about his condition'

Surendiran went to school for just a few weeks but could not remember any lesson, and failed his exams. Sometimes he does not even remember his friends’ names or his own name. His parents have now stopped him from leaving the house. He does not know why. He is unaware of his condition.

“When we first admitted him in the ICU, he woke up not able to remember what happened or why he was there. In a way, it is good. The fear would kill him. So we have just told him it is treatment for his headache.” - Anbuchezhiyan

Surendiran needs Endovascular embolization. The blood vessels causing problems will be blocked. It happens in multiple stages. It is invasive and takes time. He also needs radiosurgery. With Rs. 400/day income as an electrician, Anbuchezhiyan could pay only for the first stage of treatment. He needs your help to save his son.


Surendiran may look normal and healthy. When a headache strikes, it could either damage his brain completely, or kill him. He needs to complete this treatment as soon as possible to have the best chance at life.

UPI: rzpy.givetomlpsurendir001@hdfcbank (Copy to clipboard)
Or
Click here to read the instructions before you make a bank transfer. 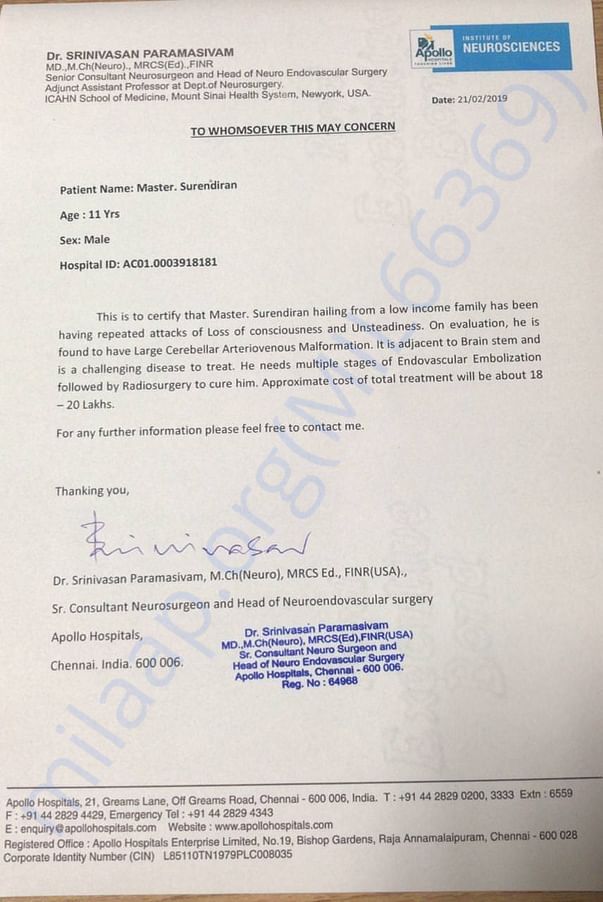 UPI: rzpy.givetomlpsurendir001@hdfcbank (Copy to clipboard)
Or
Click here to read the instructions before you make a bank transfer.

Report fundraiser
See how thousands are crowdfunding for their causes on Milaap
Rs.14,911 raised 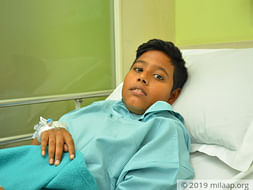