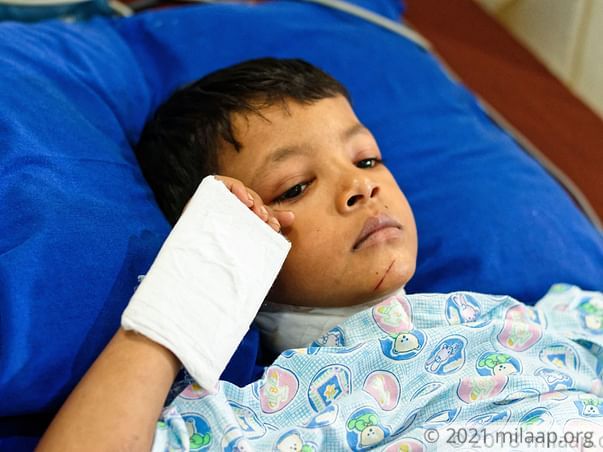 Share
8-year-old Sujoy stares blankly at the hospital walls and is unable to react to anything. He is not able to speak even to his parents now. When he closes his eyes to sleep, nightmares of what happened to him startle him, leaving him completely restless. He wakes up covered in sweat, screaming, ‘Don't kill me, don't kill me!'

Last Sunday, this little boy was abducted by his uncle who allegedly stabbed Sujoy multiple times in his neck and back, leaving him covered in blood from top to toe.

Like any other Sunday, Dhananjoy had left for the market after having breakfast with his family. Madhumita was busy preparing a meal and Sujoy was playing with his ball in the backyard. There’s a lake near their house in Haldia, West Bengal. After she heard her son scream,  Madhumita came out rushing from her kitchen, thinking he might have accidentally fallen into the lake. But to her horror, Sujoy was neither in the backyard nor near the lake. She could hear her son screaming from a neighbouring house, and rushed to the scene where she saw her husband's brother harming her son.


“My husband and I kept asking Sujoy’s uncle what such an innocent child did to deserve this. We always had a good relationship with him, I didn’t know what went wrong suddenly. I would often make food for him since he lived alone. We kept begging him to leave our son, but he wouldn’t. Despite our continuous begging, he stabbed my poor son on his neck and back with a sharp weapon. From the window, I saw him fall on the ground,” - Madhumita, mother.

The neighbours had called the police immediately and Sujoy was rushed to a hospital 15 km away from their home in the police van. Sujoy’s uncle has been taken into custody. The family is hoping that they get justice for their son.

Dhanonjay and Madhumita’s sufferings seem to be never-ending. They lost their second child 3 months ago at the age of just 2 and a half months due to a kidney disease. The parents haven't even gotten over the loss and now they are struggling to save Sujoy. They wanted to do everything for Sujoy. Dhanonjay was ready to sacrifice anything for his son's education. Sujoy was in the first standard and was a very smart child. This incident has even left his teachers in shock.

Madhumita has stayed by her son in the hospital throughout. More than Sujoy’s physical injuries, it’s the mental trauma that makes her worry. Madhumita and Sujoy themselves are in so much stress. They still haven’t been able to come to terms with what happened to their only son.

Dhanonjay is a mason in Haldia. With his meagre income of Rs 4000 a month, he was somehow managing his family expenses. His little income could never stop him from dreaming big for his son. But now all he wants is a better, trauma-free life for his son. Although the parents are indebted to the doctors who saved their son’s life, they don't have the means to pay Rs 3 lakh for his treatment.

8-year-old Sujoy was stabbed in the neck and his back by his uncle. He is in the hospital, traumatized, fighting for his life. His parents had already lost a child 3 months back and are on the verge of losing him too. His mason father can't afford to pay lakhs to save his son now.

Your support will help this traumatized boy get a better life.