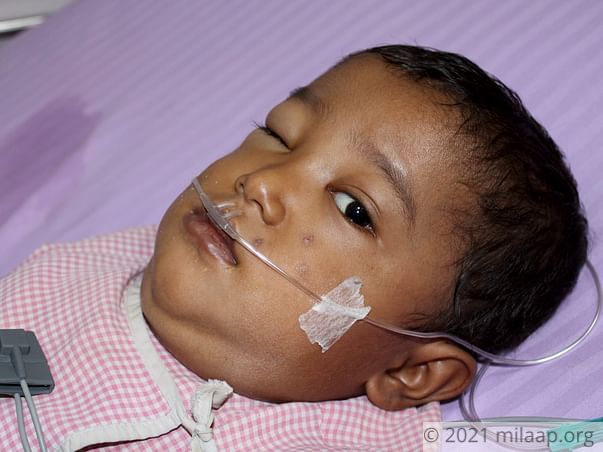 Baby Sudipta’s days used to be filled with nothing but laughter and joy. He used to spring out of bed very early in the morning, and run to see the neighborhood kids in his village. He would play with them until it was time for them to go to school. He hoped to go to nursery school soon; in fact ‘school’ was one of the first few words he learned to say. But instead of the nursery, he is now in a hospital – he is suffocating to death due to a tumor in his chest.


“His face has become so swollen that he cannot open one of his eyes now. He cannot sit nor sleep in the same position for more than 5 minutes. He tries to cry, but he cannot do so as he becomes breathless instantly.”- Sasthi Marjit, father of 3-year-old Sudipta Marjit.

Sudipta was born to Sasthi and Preeti just a year into their marriage. The couple felt elated to have been blessed with a healthy baby boy. They took good care of him in the best possible ways they could, given their modest background. But just 2 months ago, when he fell sick with a cough, cold and fever that just would not subside, they felt helpless about their child for the first time ever. Despite whatever they did, whichever doctor they took him to, he would just not get better. The poor parents had started to get anxious about their son’s worsening health. Finally, it was at a hospital in West Bengal that their son was diagnosed with a chest tumour. But the doctors there told Sasthi (father) that he had to take him to a super-speciality hospital to save his son’s life. That is when they rushed him to Bengaluru, where their relatives worked, for better care.


Sudipta, during happier and healthier times

“After the CT scan results came, I tried to hide the painful truth about our son’s condition from my wife. But I couldn’t and broke down immediately as I told her. She didn’t speak for a few minutes afterwards, but we immediately took the decision to take him to a better hospital. Our son’s life is above any hardship for us.”-Sasthi, with tears in his eyes.

Preeti has been inconsolable ever since her baby fell sick

Sudipta’s health is worsening by the minute, he has stopped speaking completely now

Earlier, when Sudipta used to get even a small cut or wound on his body while playing, he would run to his mother and tell her how much it hurt. Her soothing words would make him feel better, even before the bleeding stopped. But now, the poor child cannot even tell her how he feels because he is hardly able to open his mouth due to the swelling on his face that developed due to the tumour. All day and night, he lies beside her and whimpers softly as that’s all he can do now. He has completely stopped eating solid foods – he is being fed only milk through the tubes in his nose. He has also become motionless now – he cannot even get up to go to the washroom due to his weakness. Completely bedridden and incapacitated by the tumour, Sudipta has only one way he can survive – if he gets a surgery in 24 hours. Without the urgent surgery, he may not survive for long.

A poor farmer who had to leave his crop behind for his only child, Sasthi is struggling to save before it’s too late

Sasthi owns 1 bigha of land (1/4 of an acre) in a remote village in West Bengal, harvesting rice and mustard throughout the year when rains are favourable. He used to earn around Rs 3,000 a month – he had to take care of both farming and household expenses on this meagre income alone. Ever since the family left to Bengaluru 2 months ago for Sudipta’s treatment, Sasthi has been jobless and his crops have been left uncared for now. He has already spent the Rs 1 lakh that he borrowed from friends and family. He currently stays in a room crammed with 7-8 people, as he has no means of affording a room in the hospital, while his wife stays with Sudipta in the hospital ward. They need a little more than Rs 2 lakhs for the urgent surgery, which they absolutely cannot afford at this point.

3-year-old Sudipta is suffering from a deadly chest tumour that will suffocate and kill him without an urgent surgery. His poor parents do not have the means of saving him before his health worsens.

Your kind contribution can save this child’s life 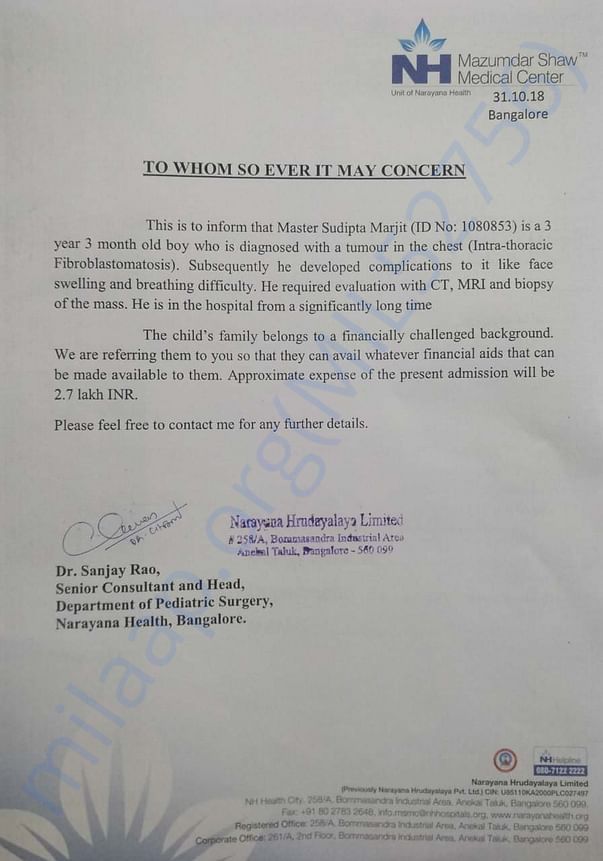 Sudipta is in the hospital and is not doing well. The doctors say that he needs surgery as soon as possible. The tumor is growing bigger and the doctors will be giving him a medicine that will make the tumor smaller. This medicine should start by this week.

Please keep sharing this campaign as he will be able to undergo the surgery only once funds are raised.

Scan & donate with any app
check_circle_outline Download payment receipt
Report fundraiser
Know someone in need of funds for a medical emergency? Refer to us
Rs.85,899 raised 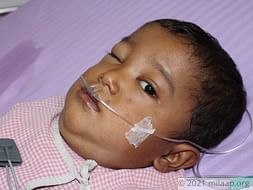