Labourer Will Lose Baby Girl To Multiple Organ Failure Without Help | Milaap
This campaign has stopped and can no longer accept donations. 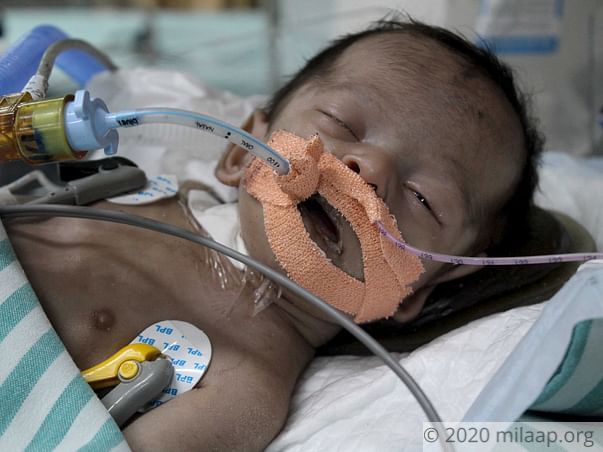 As Mallikarjuna handed over his baby girl to the nurse, his heart skipped a beat. He wondered if this would be the last time his wife, Bagamma, and he would see their baby. “Where are they taking here? She’s so small, how will she live?” a worried Bagamma asked as they took baby Sinchana to the ICU. Mallikarjuna assured her that she will be fine, but he knew that their little one had a long, tough battle ahead of her. Sinchana has a hole in her heart, and an infection that can cause multiple organ failure, and eventually, death. Baby Sinchana is only 1-month-old, her little body can’t survive this trauma without urgent treatment. She needs to stay in the NICU longer to live, but her poor parents are empty-handed.

Just a few days after they took their baby home, she fell terribly sick – now she clings to life by a thread

Mallikarjuna and Bagamma took home a happy bundle of joy. For the first few days, Bagamma would watch over her as she slept, afraid that even the slightest sound would wake her up. Baby Sinchana opened her eyes every morning to the smiling faces of her parents. But now, she wakes up to the silence of the NICU. It all began when she developed a persistent cough and cold. She soon began gasping for air.


“She just 20 days old. We took her to a hospital near our home in Gulbarga and they told us to take her to Bangalore for treatment. We used the little savings we had to take her to the big city. We knew our daughter was sick, but we weren’t prepared for what we would hear after her tests. They told us that she has a heart disease which wasn’t detected at her birth and that she had a severe infection. We had no other way but to start her treatment immediately.”

Her vital organs and life are in danger, she needs continued treatment to survive

Their baby has been in the NICU for nearly a week now. Baby Sinchana has sepsis, a condition that occurs when chemicals released in the bloodstream to fight an infection trigger inflammation throughout the body. This can damage the vital organs and eventually cause them to fail. The only way she can survive is if she stays in the NICU for 3 more days.

Mallikarjuna’s life has been an uphill battle. He lost his sister and mother at a very young age, and couldn’t complete his education. When once he had dreams of making a name for himself, he had no choice but to start doing odd jobs to help his father. Ever since then, he works hard all day to try and support his family. When he got married and started his own family, he was determined to give his wife and daughters a better life than he had.


“Every morning, my only motivation to go work in the fields for a mere 100 rupees was to save up and try to build a better future for our family. I thought our poverty would be our biggest battle, I never thought that we would lose our newborn even before she’s seen the world around her. We don’t have anything now. Every single rupee we had saved is now gone. We sleep on the floor of the waiting room outside the ICU every day and can barely afford one meal a day. I don’t know how I can save our baby, I don’t If I’ll ever get to take her home.”

Baby Sinchana now clings to life in the NICU. Her parents eagerly wait outside the ICU day and night, waiting to catch a glimpse of their baby, even if it’s for a few minutes. As they sit in silence beside each other, they wonder how long they can continue her treatment without help. Mallikarjuna and Bagamma are helpless. They can’t save their baby girl without your support.
Estimation letter 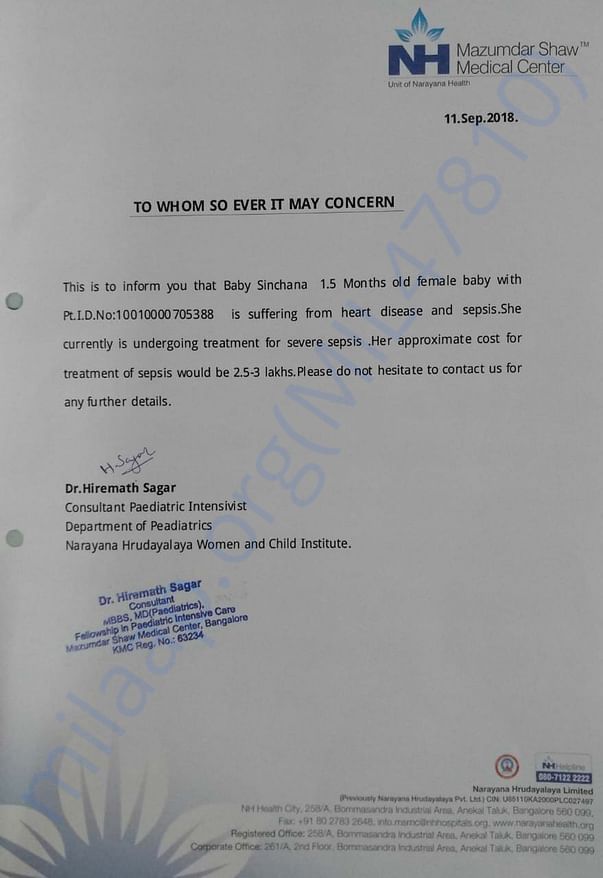 This is to inform you that the patient passed away even before the treatment could start.

Please keep the parents in your prayers. 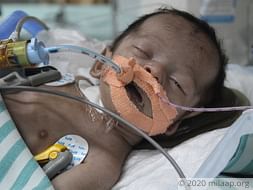