This 4-Year-Old Has Only 1 Day Left To Get A Liver Transplant | Milaap
This campaign has stopped and can no longer accept donations. 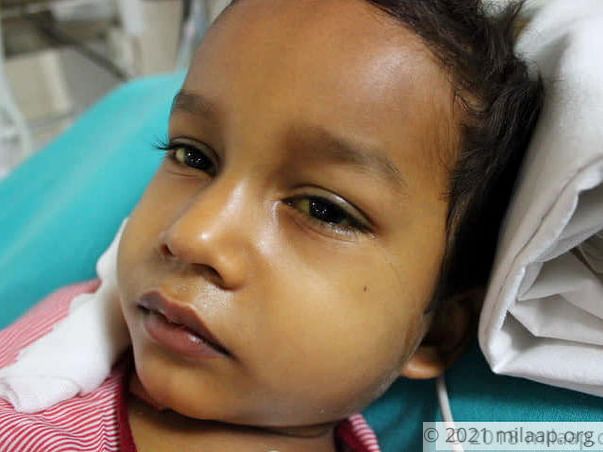 “In just ten days, my healthy and active child’s condition became so critical that we had to rush him from Gwalior to Delhi in an ambulance. His liver has completely failed. In the six hours that we took to reach the hospital, he tossed and turned in discomfort, trying to get out of the bed. He cried all the way, while I held his tiny hands, telling him that I was with him. Nothing made him feel better. The painful swelling in his stomach and the deep yellowness of his tear-filled eyes was an indication that if we didn’t make it in time, my son would not survive the night.” – Ravinder, 4-year-old Shreyansh’s father

While Ravinder was able to get Shreyansh to the hospital in the nick of time, Shreyansh is still critical. He has acute liver failure and without a liver transplant in the next one day, he won’t make it.

In the hospital, Ravinder and Sangeetha sit in silence, only talking when they’re spoken to. Watching their son tremble in fear every time he sees a needle and hearing the weakness in his voice, they’re devastated. Every time Ravinder thinks about the last time he saw his son smile, he can’t help but cry.


“During Diwali, I remember Shreyansh running around the house singing ‘happy diwali’ out loud, while his mother ran behind him with his food that he refused to eat. He always kept us on our toes. He was so active, and besides a small cold, he was never really sick. He would play with his favourite toy cars, and his older brother and he would pretend they’re in a car race. Our home was filled with his laughter. But after Diwali, he fell sick. That was only the beginning of his suffering.” – Ravinder

Little Shreyansh had a fever, and his skin had a tinge of yellow. The local doctors treated him for jaundice, but within days, his stomach started swelling and his skin and eyes were completely yellow. What they thought was jaundice, turned out to be acute liver failure. Now the only curative treatment for his critical condition is an urgent liver transplant. Ravinder and Sangeetha have just one day left to save their son from this grave disease, but they can’t afford the treatment.

Ravinder works at a petrol bunk in Gwalior and earns around Rs. 6,000 per month. With help from his brother, Sangeetha and he took Shreyansh to Delhi, but the few thousands that they have as savings is not enough to afford the liver transplant. Shreyansh is racing against time.

“Our son’s condition is getting worse with every passing minute. We don't even remember to eat and barely sleep for an hour at night. All we think about is saving our son. He will only survive if I can afford the transplant in time.” - Ravinder

Shreyansh is running out of time to get a liver transplant. With just one day left, his parents are struggling and find themselves completely helpless. Shreyansh, once filled with joy and energy, is now in excruciating pain because of his failed liver. He needs the liver transplant in time to survive, and his parents need your support at the earliest.
THE ABOVE CASE IS SUPPORTED UNDER AFFORDABLE LIVER TRANSPLANT INITIATIVE:

Your support will save 4-year-old Shreyansh’s life. 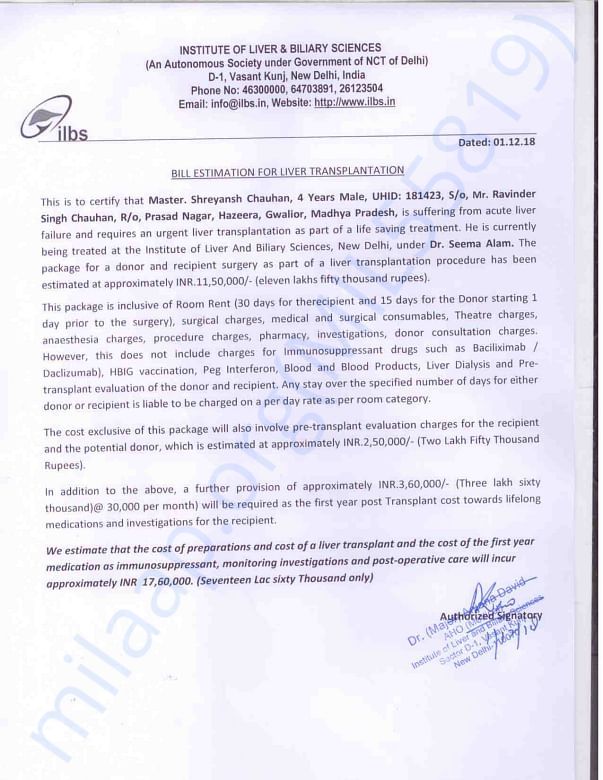 Shreyansh has been discharged and is doing well. He is currently on immunosuppresant medications. He is recovering and responding well to the treatment. We shall keep you posted.

Shreyansh has now been successfully discharged from the hospital. We are now in the process of setting up his treatment schedules post transplant so that he can receive his immunosuppressants for maintenance. We shall keep you posted on same.

Thankyou everyone for your very generous and Kind Donations.

Shreyansh Chauhan has  been discharged as good as new after celebrating his 5th Birthday. He is doing well and is responding to the treatment.

The family is very happy and thankful to each and every one of you. Please keep Shreyansh in your prayer's.

Scan & donate with any app
check_circle_outline Download payment receipt
Report fundraiser
Know someone in need of funds for a medical emergency? Refer to us
Rs.1,839,934 raised

757 Supporters expand_more
This campaign has stopped and can no longer accept donations.
$150 Million +
Raised on Milaap
Are you in need of financial support for medical or personal emergencies, or a social cause?
Start a fundraiser
Or
Know someone in need of funds for a medical emergency? Refer to us
Campaign organizer contact_mail 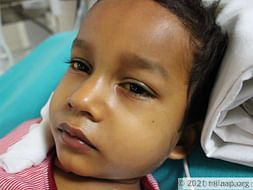