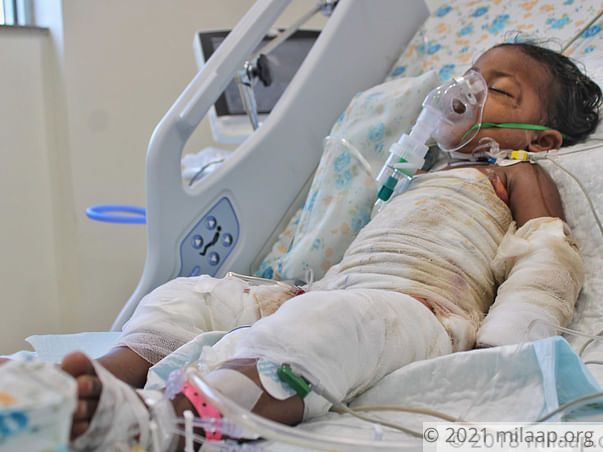 Share
Every time Sai Kumar looks at his daughter, Shiparadepka, lying down in the ICU bed all covered up in the bandages, he is reminded of the horrific incident that landed them there and cold shudders run down his spine. It was just another usual day for Sai who was leaving for work. But 2-year-old Shipara was in a mood to play and she kept on asking her father to stay back for at least one more piggyback ride. Sai was getting late and had to leave - Shipara ran after her father, calling out to him loudly. Suddenly Sai heard frantic screams and turned to see that his little girl had slipped and fallen into a huge pot of boiling water that was kept there carelessly by a neighbour. He immediately ran and pulled her out. But by that time, her body was scalded - from her chest to her knees she was severely burnt and was wailing out in pain.

Sai and his wife, Pushpalata, didn’t waste any time in taking Shipara to the hospital. But as luck would have it, they couldn’t afford an ambulance and had to take their daughter in an auto.

“All the while she was crying  painfully and in between her breaths she kept calling me and reaching out to me. I felt so lost, I didn’t know what to do so that she can be freed of this excruciating pain. I kept caressing her head and telling her she would be fine soon but she was inconsolable.” - Sai Kumar.

Since the last three days, Sai has not left the side of Shipara’s bed. He sits there, praying and waiting for his daughter to make some movement. He frantically calls out to doctors and nurses when he feels that Shipara is having any trouble breathing or when she has seizures.


“I couldn’t protect her from this plight but I will not leave her alone here. I want to be by her side when she looks for me. The doctors have told me that my daughter needs constant dressing. She also needs to stay in the ICU for a longer period of time. I am trying to do everything in my hands to continue her treatment but I don’t know how long I can continue.”

An old pic of the little baby

A construction worker by profession, Sai is struggling very hard to afford the life-saving treatment for Shipara

Sai had shifted to Bangalore with his wife and his two other children from a small village in Prakasam district in Andhra Pradesh just two months back. He has been working at a construction site since then for a meagre salary of Rs 5000 per month. He couldn’t afford to rent a place and was staying on one of the rooms of the unfinished building. He has already spent about Rs 1 lakh after borrowing from friends and near relatives. With his salary, he is in no position to get his daughter treated and bring her home safe.

2-year-old Shiparadepka has suffered 3rd-degree scald burns in 45% of her body after she accidentally fell into a tub of hot water. She needs to stay in the ICU and also needs to undergo dressing. Her father is very poor and will not be able to continue her treatment that costs about Rs 5 lakhs. Your kind support can save the life of this little girl and bring back the lost happiness.

You can extend a helping hand to save Shiparadepka