5-Month-Old With Liver Disease Has Few Days Left To Get Transplant | Milaap
This campaign has stopped and can no longer accept donations. 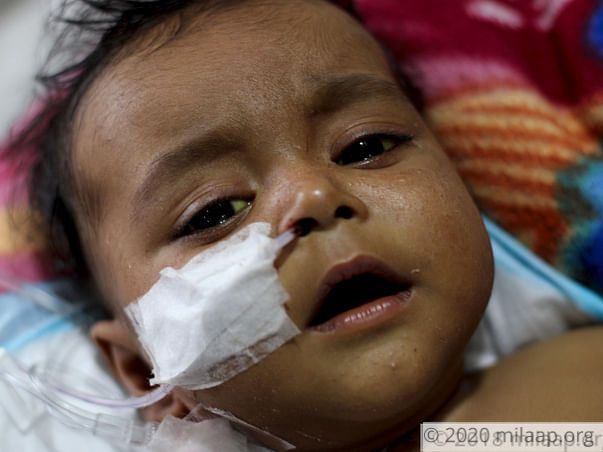 Baby Sharthak wakes up alone every morning to the beeping of the machines in the ICU. The 5-month-old has known nothing but pain ever since birth. Now, his condition is extremely critical. Baby Sharthak has a few days left to get a liver transplant, but his parents are struggling to save him. Every night, Neelam goes to sleep on the cold floor of the hospital with only one prayer – that her baby is saved from the trauma and misery of this fatal liver disease.


“I just get ten minutes in a day to see my baby boy. Every time I go inside the ICU, I’m terrified that I’ll find him sicker than the last time I saw him. His condition is deteriorating with each passing minute. When I call out to him, he looks at me with his yellow eyes, as if begging me to carry him. But I can’t hold him anymore. Now, even my touch causes him agonizing pain. His stomach is so swollen, and it’s only increasing because of the severe liver disease. It can kill him in days without an urgent transplant.” – Neelam, Baby Sharthak’s mother.

Baby Sharthak’s birth brought nothing but happiness to the family, unfortunately, it was tragically short-lived

When baby Sharthak was born, Neelam and Sunil thought they were taking home a healthy baby boy. Their 3-year-old daughter was delighted to have a younger brother and told everyone who came home that she had a chota bhai (little brother). Neelam and Sunil couldn’t have been happier. They felt like their family was complete and soon began preparing for his naming ceremony.


“A week after we took him home, he got a high fever. His eyes and body started turning yellow and we quickly rushed him to the hospital. We were told it was jaundice and he would be fine in no time, but days passed, and our baby just didn’t get better. We took him to different hospitals in different cities. After four months of shuffling between hospitals, desperately looking for answers, we found out that he has end-stage liver disease. We named him Sharthak in the hospital.”

Just when they thought he was recovering, his condition became extremely critical

Baby Sharthak was immediately admitted to the hospital for end-stage liver disease. He underwent a bile duct surgery on 30 August and was in the ICU on ventilator support. In two weeks, his condition began improving. He was moved to the general ward, and Neelam could finally hold her baby. But just when they thought he was getting better, Neelam and Sunil received another jolt – their baby boy started vomiting blood. He was soon rushed back to the ICU for a severe blood infection. Now, baby Sharthak is fighting for his life. The only thing that can save him is an urgent liver transplant.

His parents are desperate to save him, but with nothing to call their own, they fear losing him to the deadly disease

Neelam spends all day waiting outside the ICU, while Sunil goes to work miles away. He works as a primary school teacher and is doing everything he can to try and afford his baby’s treatment. It kills him to not be with his wife and baby, but this is the only way they can even keep him in the hospital. However, despite their best efforts, Neelam and Sunil are severely falling short.


“We don’t have a single rupee of our own. Everything we’ve spent so far is by borrowing from relatives. We’ve taken so many loans from so many people. We keep telling them that we will return their money as soon as our son recovers, but I’m losing hope."

Baby Sharthak’s condition is extremely critical. All his parents' hopes and dreams for their baby’s future have now been crushed by this severe disease. 5-month-old Sharthak has his whole life ahead of him, and instead of being in the warmth and comfort of his home, he’s fighting for his life in the ICU. Only you can help him get the life-saving liver transplant.
Estimation Letter 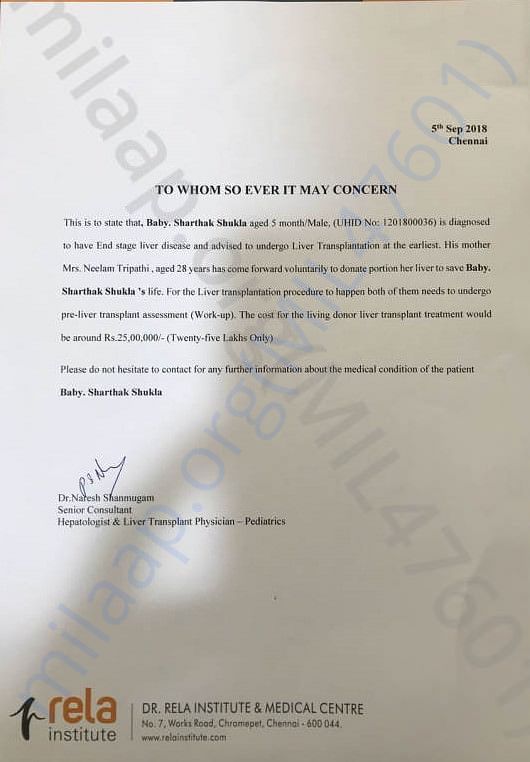 Sharthak Shukla is no more with us. He fought till the end but unfortunately could not make it. We would like to thank all the supporters who has donated for his cause.

Funds raised will be utilized for his medical expenses.

Please pray for his soul.

I am grateful to all of you for the love and support given to Sharthak.

He is presently in the hospital under medication. His bilirubin count (liver infection) has decreased, which is a good sign of improvement and if the same lands between 0.1 to 1, he will not require the transplant as well.

Please pray for his health and share the campaign. Thank you for the love and support! Will keep you posted.

Thank you all for your immense love and support!

Baby Sharthak is doing well now and he is out of the ICU. His overall health is good, he doesn't have any infections and in the past week he hasn't developed a fever either. He is on medication.

Sharthank's mother has been identified as a donor and if all goes well, the transplant will take place in another 3 weeks. Sharthak and his mother both will have to undergo some tests before the transplant.

Please keep praying for my family! Thank you all for your love and support!

Report fundraiser
See how thousands are crowdfunding for their causes on Milaap
Rs.656,632 raised

A
Advaith donated $25
View all supporters 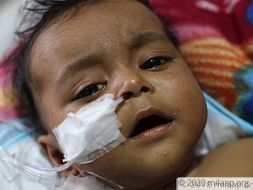