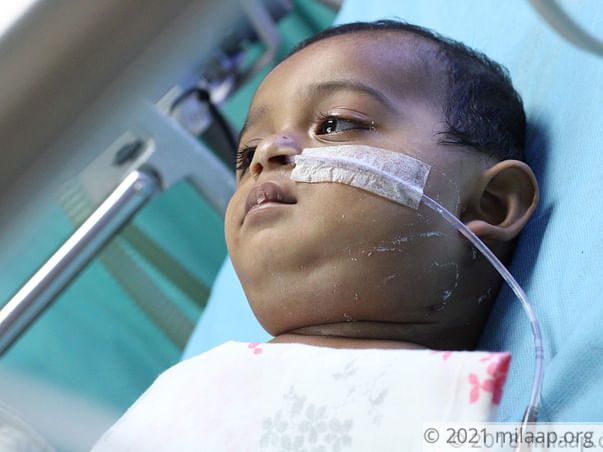 Baby Sharan is the apple of his parents' eyes.  He was born 10 years after his sister Saranya. Being the youngest child of the family, he was pampered with so much love. He just turned 1 recently, and despite their modest income, his parents had the whole house decorated with balloons and colour paper, and invited all their relatives and friends to his birthday party. Just a month after his birthday,  the most tragic thing happened, leaving the whole family in despair. Baby Sharan tripped on the floor and hurt his head badly against the rough surface. That was the last moment they saw him conscious. Now his parents beside him, waiting every moment to hear them 'Amma' and 'Appa' again.

An unexpected fall has led to paralysis and violent seizures

The day baby Sharan's life changed, started like any other day. His father had left early for the work and his sister had gone to school. His mother, Shanti, after feeding him, had just mopped the floor with a cleaning solution. In the blink of an eye, baby Sharan slipped on the floor and hit his head hard on the tiles. Shanti was shocked and chills ran down her spine seeing the blood. She immediately rushed him to the hospital in an auto. To make matter worse, he got seizures even before he could be admitted in the hospital.


"I wish all this was a bad dream, I can't come to terms with it. I was terrified when he got seizures and his eyes rolled up. He was taken to ICU but his condition kept worsening. It has been 15 days and he has not uttered a word since then. He was running around and playing happily, everything turned upside down in a minute, I can't bear this." - Shanti, Mother.

Despite undergoing an urgent brain surgery, he is not out of danger yet

Baby Sharan is diagnosed with acute hemiplegia, it is paralysis on one side of the body. Soon after he got violent seizures, one side of his body got paralyzed. His brain started swelling and doctors said he had to undergo a surgery called decompressive craniectomy, a procedure in which part of the skull is removed to allow a swelling brain to expand without being squeezed. He was kept on ventilator support but now he is off it. Yet, he has not recovered fully. Seizures are not fully under control and he needs 3 weeks of hospital stay to recover completely and live a normal life.


"Sometimes he opens his eyes, but it is only for few minutes. I call his name and cry but he is not able to say anything. We sleep in the hospital corridor. We do not close our eyes, fearing that we may not be next to him when he opens his eyes. We cannot imagine going back without him." - Shanthi.

An old pic of baby Sharan

Baby Sharan's father Thilak Raj has a small photo studio and he manages to run his family with the meagre income he gets. He was determined to provide healthy and happy lives to his children. They lived a happy and modest life but now, it has come to a standstill. He has borrowed money from his relatives and friends but it is nowhere close to the amount needed for his baby's treatment. He fears that he may be forced to stop the treatment for lack of money.


"I did not open my shop since the day he was admitted in hospital. I have no income now, I'm borrowing money to even buy medicines for him. We need 6 lakhs for the treatment. I do not know what I can do. There is no meaning to our life without him. I can't lose him." - Thilak Raj.

1-year-old baby Sharan is paralyzed on one side of his body after a tragic fall. He also gets violent seizures from time to time. He had an urgent brain surgery and needs 3 more weeks of treatment to recover completely. His parents do not have anything left. Only your support can help these parents take their baby back home healthy.