With Father Toiling Away In The Gulf, Mother Struggles To Save Baby | Milaap

With Father Toiling Away In The Gulf, Mother Struggles To Save Baby 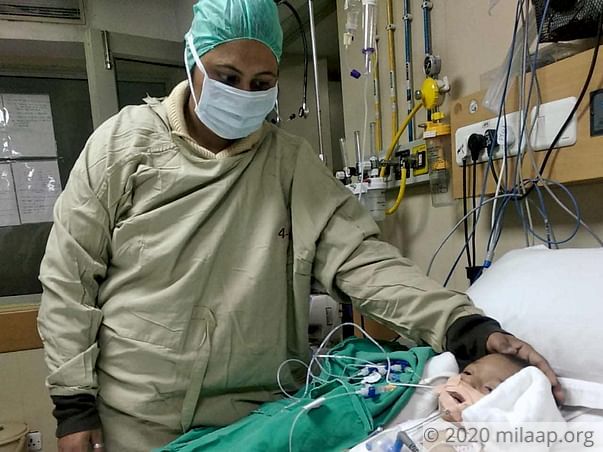 It has been days that Navdeep has had a good night’s sleep. How can she, when her baby boy is unconscious in the ICU, with a weak heart that could fail him? To make matters worse, she does not have her husband by her side. “Due to our poor financial condition, my husband, Gurinderbir, had to leave for the Middle East three months back to pay off all our debts. My old parents have done their best to help me out, despite their poor health. I feel helpless,” she says.

Baby Sehajdeep is the second child of Navdeep and Gurinderbir, a poor couple belonging to a small village in Punjab. Gurinderbir had to do many odd jobs to keep his family afloat – but no matter how hard the times were, he made sure that his family had three meals a day. Their elder son, Manjot Singh (5) had been pestering his parents for a baby brother or sister for a long time, and therefore Sehajdeep’s birth was celebrated in the household, despite their bad financial situation. “He was fine for the first 10 days of his life. After that, he started having breathing problems. He would suffer from cold and fever every now and then. Regular trips to the doctors and medicines did not help him,” says Navdeep.

Sehajdeep, a month before he started falling sick

When the baby started feeding less and subsequently lost weight, Navdeep knew something was amiss. Her husband was not around. Her elderly father accompanied her to a good hospital with the baby, where he was diagnosed with a congenital heart disease called truncus arteriosus, where there is a hole in the dividing wall (septum) between the two lower chambers of the heart known as the right and left ventricles.  This led to lower levels of oxygen in the body, and added pressure to his lungs. He had to undergo an urgent surgery on 14th January and has been in intensive care ever since. He is unable to breathe on his own and needs two more surgeries to completely recover.

Navdeep with her elderly father at the hospital

‘My husband wants to come back to India desperately, but he can't’

Gurinderbir considered it Waheguru’s blessing when he landed a job as a carpenter in Dubai a few months ago. He believed that this would pave the way for good times for himself and his family. Ever since Gurinderbir came to know of his son’s plight, he has been inconsolable. “Earlier, he used to call home every week only in a bid to save money, but now he has been calling every other hour. He cries and tells me that he wants to see him, but his employer will not grant him leave since it's not been even a year since he joined. He is trying his best to pool money, but nothing has worked out so far,” laments Navdeep. Navdeep was able to pay for her son’s first surgery using her aged parent’s savings (Rs 2.5 lakhs). She has nothing left anymore and no one to turn to for help.

5-month-old Sehajdeep is suffering from a severe heart disease and needs to undergo two back-to-back surgeries to be alright. He is currently in intensive care, as his bad heart is putting a lot of pressure on his lungs. He cannot breathe on his own as well. With his father toiling away in the Gulf to pay back loans, his mother is struggling to save him.

Your kind contribution will ensure that this baby is saved

UPI: rzpy.givetomlpsehajdee001@hdfcbank (Copy to clipboard)
Or
Click here to read the instructions before you make a bank transfer. 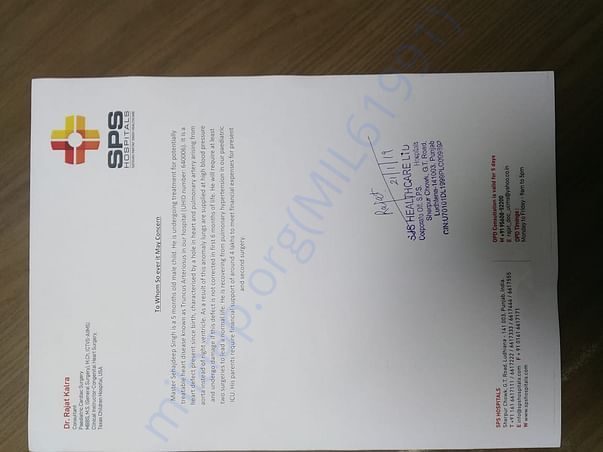 UPI: rzpy.givetomlpsehajdee001@hdfcbank (Copy to clipboard)
Or
Click here to read the instructions before you make a bank transfer.

I'd like to inform you that Sehajdeep had to undergo another operation to add a pipe to ease his breathing condition. He is now under medication since the past 2-3 months.The doctor said depending on how he reacts to these medicines, he will consider if another operation is required or not in the next 2 weeks. We will keep you updated about his condition.

Thank you all for your continuous support and good will. We hope Sehajdeep has a speedy recovery.

The baby is still in the PICU and still has infections. He will need prolonged stay to recover.

Thank you all for coming forward to help me. Please do continue sharing the campaign with your friends and family.

Report fundraiser
See how thousands are crowdfunding for their causes on Milaap
Rs.167,200 raised 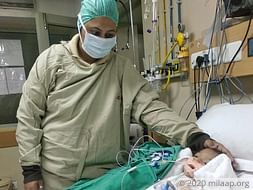 With Father Toiling Away In The Gulf, Mother Struggles To Save Baby