Sarika (a.k.a - Raju) is transgender performing artist. Since childhood Sarika has had an immense passion towards dancing, especially towards Maharashtriyan folk dance 'Lavni'. As she became young, she started cross - dressing and one of the early 'trans - performers' who used to perform Lavni with cis - women dance groups in smaller part of Maharashtra districts. Sarika was explored when she came in touch with the community based organization. She became a founder member of 'The Dancing Queens' group which is a trans-led dancing group inclusive of mainstream community & LGB community  members using 'Dance' as an advocacy medium to sensitize the corporate sector on gender & sexuality issues. Sarika was sole breadwinner for the family, handling responsibilities of her  parents as well. Through her mesmerizing dance talent she dazzled several stage performances and created special place for her in audience hearts. Soon people started called her 'Mami' (meaning aunty) in LGBTI community. She was full of positivity and never give up to the difficult hardships of life. She kept going and in difficult time she was also involved in begging and sex work in absence of dance shows. She was denied a job several times due to her feminine behaviour and discriminated against at the workplace on several occasions.

Two years back she met with 'brutal attack by her customers' in the night as a hate crime while returning from her performance. She was beaten badly, all her money and jewellery was snatched and she was thrown to die near the dumping area. She was unconscious, badly hit on her head and bleeding for two days before she was discovered by local people and brought to her family. It took so much effort for her family to make her come into her senses again. She has not been able to recognize anyone for almost a year. In these difficult times, her family has spent all their money on her medication and other support. Sarika is not in critical condition, she can not walk, she recognizes people but she is in no position to do any household work. It takes two people to also take her for nature's call.

We are creating a campaign for Sarika for urgent support for one year, so that she can recover on her senses and we connect her for some job opportunities in future. We seek your kind support and urgent help through your generous donations please. With your generous support, you can help Sarika dance again on her feet and take care of her own family next year. Donate for our Dancing queens Sarika 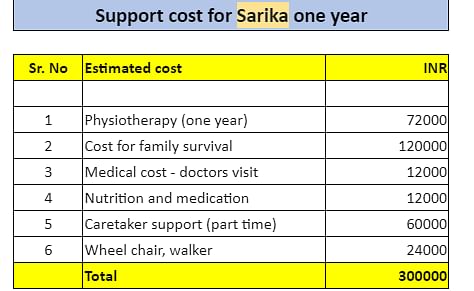