Hospital Sweeper Needs Help To Save His 4-Year-Old From Cancer | Milaap
This campaign has stopped and can no longer accept donations. 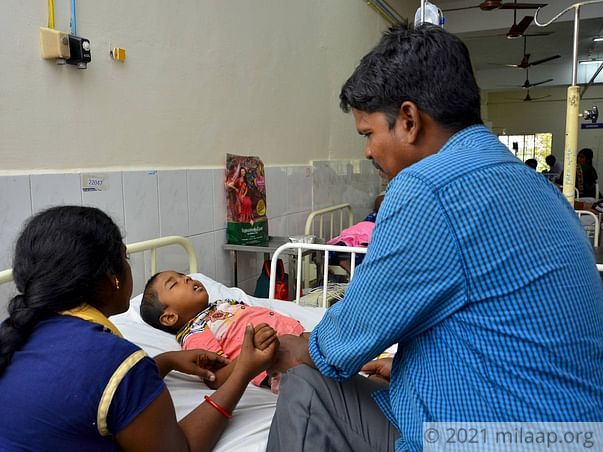 Harikrishnan starts work early in the morning, cleaning every room in the hospital, making sure that it is spic and span. He meets patients - both old and young - frequently and shares friendly banter with them. He always wishes them a quick recovery, saying a prayer in his heart, and moves on to the next room. But when the cancer ward approaches, his heart always skips a beat. Watching weak children cry and writhe in pain always made him wonder why innocent souls have to suffer.

But now, in a cruel twist of fate, his own child has been diagnosed with deadly cancer. Harikrishnan is shocked and has still not come to terms with the fact that his son could potentially die without treatment that he is struggling to afford.

The parents were waiting for the first day of his school, but the most unexpected happened

Cancer can be a disease of dreadful retrospectives – that lump that was looked at but not tested; that mole that was thought to be okay. For little Santosh it was the pain in his legs that his parents assumed to be normal. The little one was all set to start his kindergarten and his parents were equally excited to send him to school. But when the day came, Santosh did not go to school, instead he was admitted to the cancer ward.

Santosh has Acute lymphoblastic leukemia, a form of cancer that builds up in the bone marrow and move into the bloodstream and can spread to other organs in the body. It can turn fatal, if left untreated.

The poor father has nothing left with him to continue treatment

Harikrishnan earns a meager income and he was not able to be regular at work due to his poor health. He often falls sick and after his son's diagnosis, he is both physically and emotionally exhausted. Santosh has been strictly advised to take only home-cooked meals and so his mother goes home every day to prepare food for him. In the meantime, Harikrishan takes a break from his work and looks after his son.

"I have spent 2 lakh so far by borrowing from my friends. Doctors have told us that he needs treatment for the next 3 years . Only a month has passed and it already feels like a year. I don't know how I'm going to manage. We need 5 lakh for his treatment. I can hardly afford a meal now." - Harikrishnan.

You can help save their only Son

The cancer that Santosh is battling now has the potential to spread all over his body and without continued treatment for the next 3 years, it can turn fatal. He was in ICU for 10 days and was shifted to the general ward yesterday. He suffers from vomiting, endless nausea and excruciating pain in his stomach and legs. His poor parents are struggling every day and they have no strength to see him suffer so much at this age. For the next 3 years, Santosh's life will be confined to hospital but you can give them the assurance of going back home healthy. Only your contribution can save him.

You can save 4-year-old Santosh's life 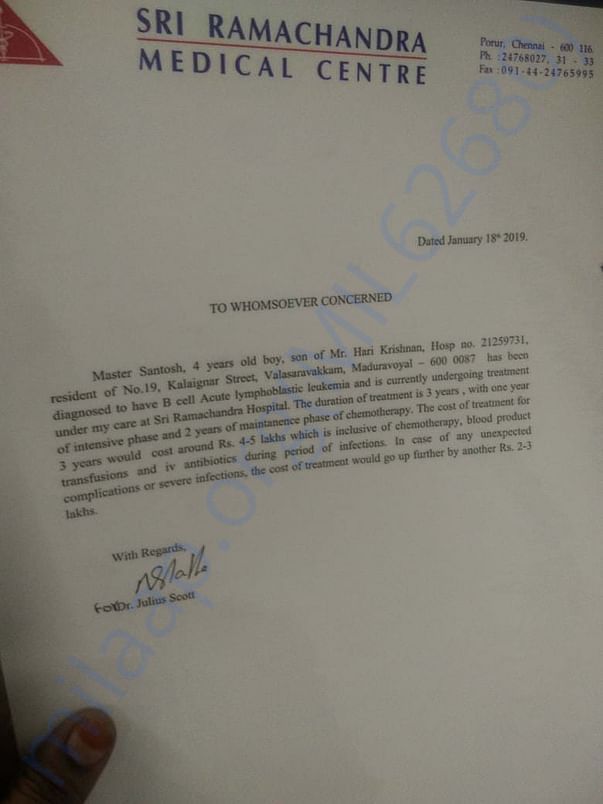 Scan & donate with any app
check_circle_outline Download payment receipt
Report fundraiser
Know someone in need of funds for a medical emergency? Refer to us
Rs.322,744 raised

44 Supporters expand_more
This campaign has stopped and can no longer accept donations.
$150 Million +
Raised on Milaap
Are you in need of financial support for medical or personal emergencies, or a social cause?
Start a fundraiser
Or
Know someone in need of funds for a medical emergency? Refer to us
Campaign organizer contact_mail

Get well Soon! Everything will be alright soon!

Get well Soon! Everything will be alright soon!