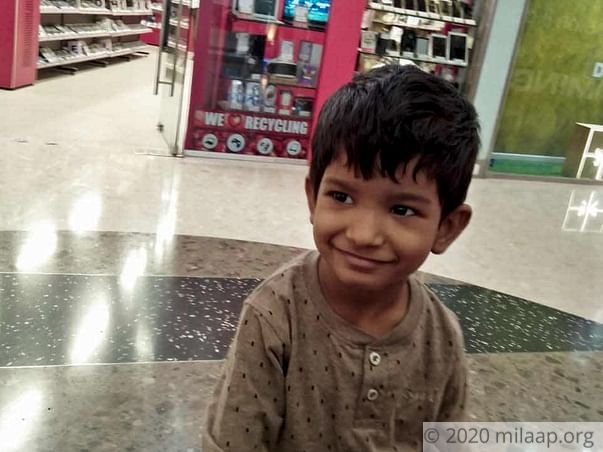 Samarth spent his 4th birthday quietly lying on the hospital bed, clenching his teeth due to the pain of chemotherapy. No one reminded him that it was his birthday – balloons, cakes and gifts were a far away dream. On that day, Kallangouda said a small prayer in the temple in the hospital before he quickly rushed back to be by Samarth’s side. A child full of life and enthusiasm before cancer took over, Samarth now doesn’t say a word. His parents try talking to him, even give him the phone to play, but he just stares ahead in silence.


“He’s even stopped talking to us now. Other children around him in the cancer ward cry every time they’re poked, but now he’s too weak and scared to even do that. I try to stay strong for him, but when I’m reminded of how he was before the disease, I break down.” - Kallangouda, father

Samarth was unstoppable before cancer – always joyful and active

Samarth started going to nursery. He was the first to get ready at home, and always picked out his outfits for school. Instead of eating his breakfast in the morning, he would tell Kallangouda and Geetha stories that he had made up. It was a happy home. Until little Samarth was diagnosed with blood cancer one month ago.

“The hospital visits, tests and finally starting chemotherapy completely changed him. In just a few weeks, our son became so sullen and weak. It’s shocking. He barely even responds to us anymore. He had even stopped eating because of the painful blisters in his mouth.” - Kallangouda

Samarth needs 6 more cycles of chemotherapy and a bone marrow transplant to fight this dreadful disease that can kill him.

Kallangouda is a newspaper delivery man in Dharwad, Karnataka. His day begins as early as 4 am, as he goes around on his scooter delivering the daily paper around the area. Every Friday after work, he would go to a nearby sweet shop and buy his older son and Samarth their favourite peda (Indian sweet). It was the little joys that kept the family going. Although he earned a minimal amount from his job, they were content. Those days now seem like a distant memory to the parents as they sit in the cancer ward where their son is undergoing treatment.


“As parents, you never think that this is something you should be prepared for. No one in our family had cancer. Our lives were going on like any other humble family. Now we have nothing. We’re in Bangalore, with no place to stay or anyone to help us. We want our old Samarth back, I will do anything to see him smile again.”

A bone marrow transplant can save him from cancer

Samarth needs a bone marrow transplant to fight blood cancer. Away from their home and family, Kallangoda and Geetha have no means to save him. They have no savings and the few thousands their relatives have lent them are all over now. Samarth, an active, talkative boy, has now been silenced by cancer. He can do nothing but lie in bed. He doesn’t want to talk or eat. His parents are distraught watching him like this. If they can’t afford the bone marrow transplant, they will lose him forever. 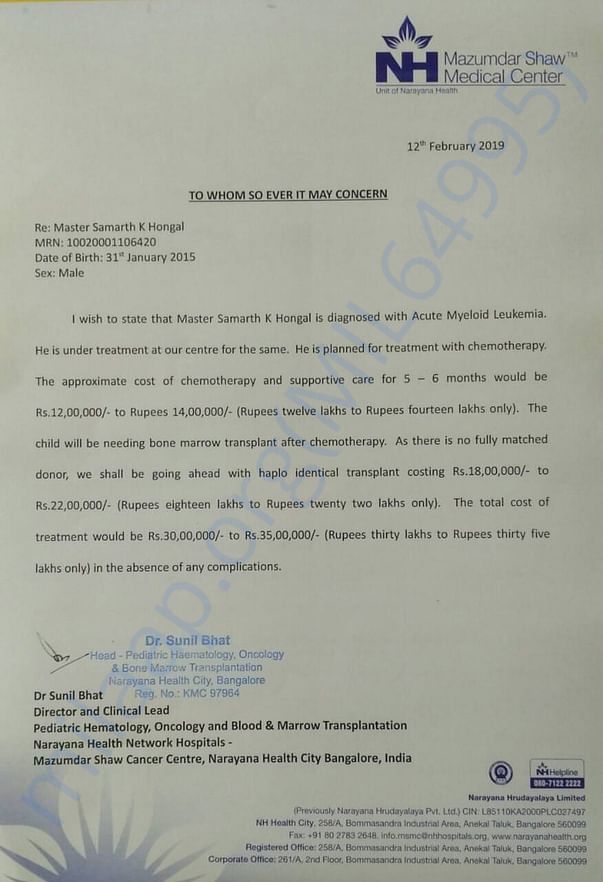 Report fundraiser
See how thousands are crowdfunding for their causes on Milaap
Rs.42,051 raised

Donated to this campaign via Paytm? Click here if you can’t find your donation listed below.
J
Jaya donated Rs.2,500
AV
Arunkumar donated $50

We are praying to god you get better and recover soon and get back to being kid again.

Donated to this campaign via Paytm? Click here if you can’t find your donation listed below.
J
Jaya donated Rs.2,500
AV
Arunkumar donated $50

We are praying to god you get better and recover soon and get back to being kid again. 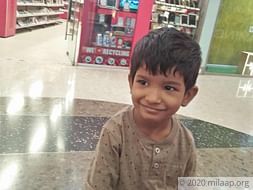