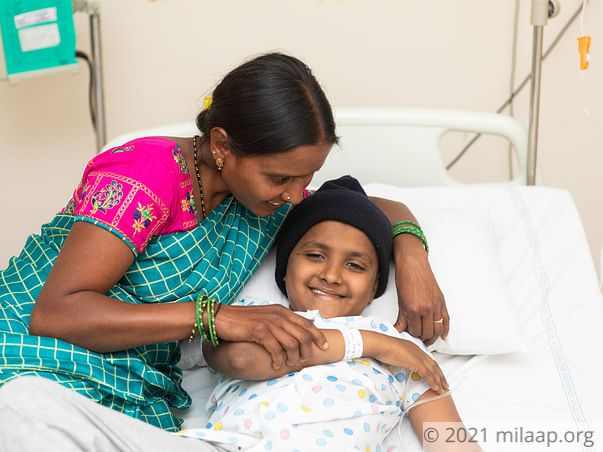 He was crying as if his bones were breaking over and over again every minute. It was not a normal fracture."  - Sobhan Babu

Sai Charan was just learning to ride his bicycle so he could go to school with his friends. Just as he got the hang of it, he fell down. His leg was wrapped in a cast as he had a fracture. He was not supposed to be walking for 3 months. Every day, even as he was on the bed, Sai cried of pain. It has been a year since that day, Sai is still fighting to save his leg and life.

When he felt his leg getting worse in the cast over 3 months, Sai began to fear he will never walk again. He also became extremely exhausted. Sobhan and Navanitha took him to several doctors in Telangana, and he was finally diagnosed with Ewing's Sarcoma, a type of cancer that affects the bones.

"Sai's worry is whether he will ever walk again. He asks me if the pain means that he will lose his leg. I cannot bring myself to tell him that the risk is not just to his leg, but also his life." - Navanitha

Ewing's Sarcoma usually affects people from the ages of 10 to 20 and has a high rate of being cured. It starts in the legs, and often causes fractures. Sai's bones were already affected when he fell off that bicycle. In 3 months, the tumor kept growing. He had to start chemotherapy immediately to have a chance at beating it.

'He doesn't know that he has cancer, it will scare him to death'

One year has passed since the diagnosis. He has been through multiple chemo cycles and the side effects of it are alarming. He often gets high fevers, severe cold, and cough. He thinks he is getting treatment for the fracture and does not understand why he has to stay in the hospital for so long. His parents constantly try to distract and cheer him up with tickles and jokes.

"He cried a lot when he saw his hair falling. He did not even let us shave his head. He does not want to look in the mirror anymore. He promises to never touch a bicycle again just to get me to take him home." - Sobhan

'I drive day and night to pay for his chemotherapy'

An auto driver by profession, Sobhan Babu barely earns Rs 300 per day. With his little income he was able to provide a decent life for his children, Sanjay (12) and Sai Charan. He has managed to pay for 8 months of chemotherapy. Just as they are in the last phase of treatment, Sobhan ran out of funds.

“No matter how much money I try to arrange for my son’s treatment, it’s just not enough. I’ve sold my land, my wife’s jewellery and even borrowed money from others, yet I’m running short of money for next chemo session. I’ve spent Rs 14 lakhs so far, now I don’t know what I can do." - Sobhan Babu, father.

With your help, Sai Charan can beat this cancerous tumor once and for all

For the past one year, Sai Charan has been confined to his bed because of a cancerous tumor. This poor child does not know about his disease and he is desperately waiting to go back home. Pausing therapy at this point could be fatal. His parents are begging for help. On some level, Sai has begun to understand his disease is worse than just a fracture. If he ever discovers the truth, he may not make it alive.

You can save this boy from one of the most deadly forms of cancer.