11-Year-Old Fighting Blood Disease Is Hopeful Of Getting Better | Milaap
This campaign has stopped and can no longer accept donations.

11-Year-Old Fighting Blood Disease Is Hopeful Of Getting Better 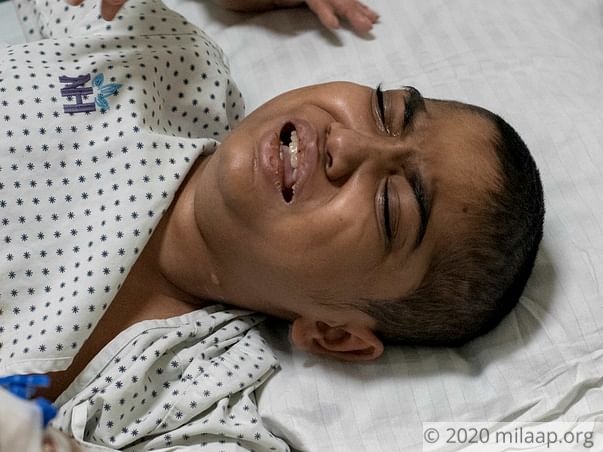 In the midst of a hospital ward surrounded by mostly happy children playing with each other and chatting up with the nurses, 11-year-old Ruturaj’s screaming self is a stark contrast. “Every inch of his body hurts every second of the day,” says his father Vijay. He screams and kicks his legs to show his distress, and only one thing can calm him down – his parents reassuring him that he will get to go back to school and fulfil his ambition of becoming an army officer.


Ruturaj, in his favorite army costume: an old photo

“The moment we say the words ‘school’ and ‘army’, we can see his face lighting up. Sometimes, his teachers call him up to give him confidence as well.  It’s the only glimmer of hope he has in this ordeal. We can save him, and relieve him of this pain that he has been suffering as a result of his severe blood disease, but we need lakhs for it. We are completely helpless,” adds an emotionally and financially exhausted Vijay.

This 11-year-old’s life was drastically different from what it is now around 2 years ago. An energetic child who was full of vigor, he would cycle 2.5 km to and from school every day. Apart from this, he would actively participate in all sports events at school too. As he hardly got sick, his parents Vijay and Sadhana never had any reason to believe that their son would suffer so much one day. But the inevitable happened when he started bleeding from his nose and mouth one day. He also had blood in his urine, coupled with high fever.


An old photo of Ruturaj with his parents and sister Vasundhara

Shortly after, he was diagnosed with aplastic anemia, a rare and deadly condition in which the body stops producing enough new blood cells. “He was advised against going to school, and from then on, it has been very difficult for him. The weekly blood transfusions, the intermittent fever, the pain that accompanies them both… life had become hell,” says Sadhana, tearfully.

‘We sold our house and cattle, have nothing left to save our son’

Vijay and family used to live in Belgaum, Karnataka, where he earned his living as a farmer, also grazing cattle. The family lived in a small house they owned, and was largely satisfied with whatever little they had. But Vijay had to sell everything to move to Mumbai for Ruturaj’s treatment after he was diagnosed. Now unemployed and penniless for over a year, Vijay is completely dependent on the mercy of his extended family members and occasionally, kind strangers. Vijay and Sadhana had to leave their daughter, Vasundhara, in the care of relatives back home, and this has added to their woes. They do not have money for their next meal, let alone the expensive bone marrow transplant that their son desperately needs. All they can do is pray for Ruturaj’s good health.

“He needs the transplant soon as his condition is deteriorating by the day. We cannot see our son suffer in front of our eyes,”- Vijay

Ruturaj was an active boy with big dreams, now confined to the bed by a severe blood disease. He writhes in unbearable pain throughout the day, but all hope is not lost for him. He can survive and achieve his aim of becoming an army officer one day, with a bone marrow transplant.

Your kind contribution will ensure that this young boy survives 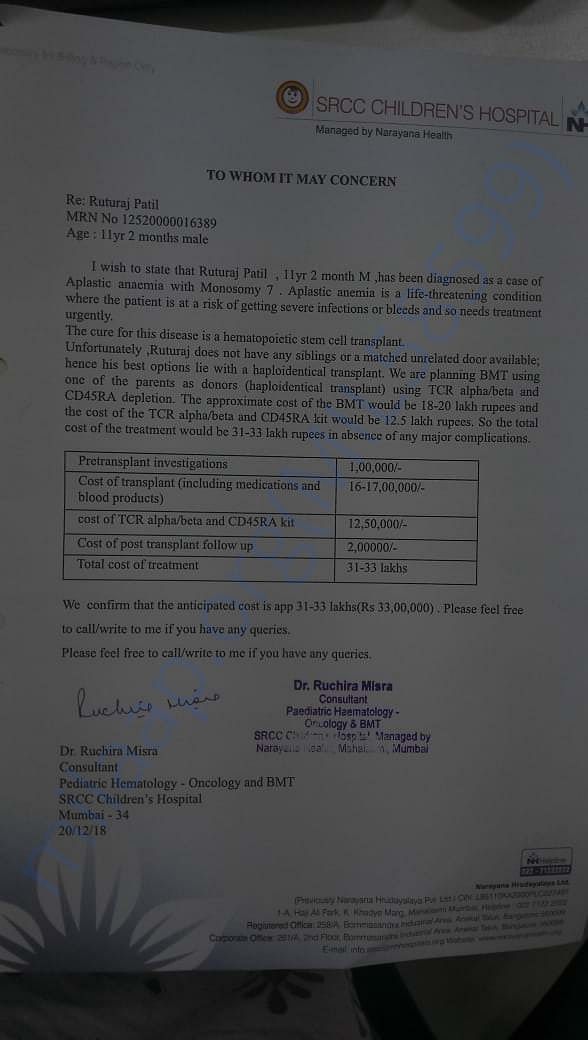 Thank you for your support and love towards Ruturaj,

Unfortunately Ruturaj passed away due to complications during his treatment. Our sincere condolences to his family and friends. May his sould rest in peace.

Once again, we thank you for your support.

Report fundraiser
See how thousands are crowdfunding for their causes on Milaap
Rs.99,525 raised 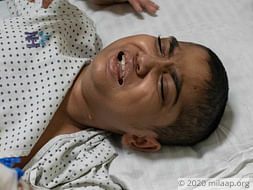 11-Year-Old Fighting Blood Disease Is Hopeful Of Getting Better