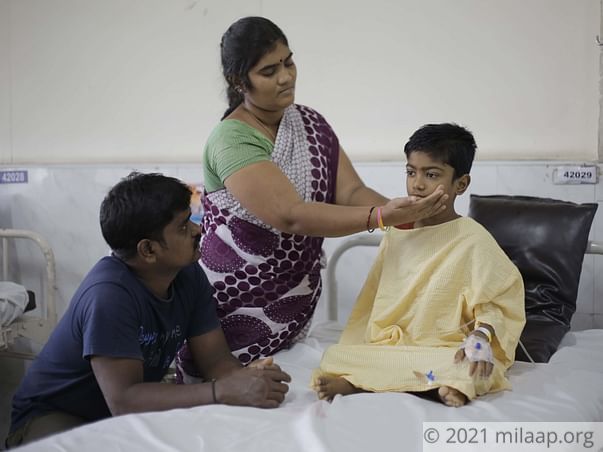 ‘’He touches the painful swelling on his thigh and armpits and asks me ‘appa, what is wrong with me? Why am I always in pain?’ and I can never think of the right thing to say to him. He knows this is not normal, but I don’t have the strength to tell my son that he will die of cancer without treatment. Cancer has not only made him physically weak, but he’s extremely depressed. Even when the other patients tell him he’ll be fine soon, he just stares ahead blankly. He’s slowly slipping away from us.” – Durai, Ritish’s father.

Just over a month ago, Ritish’s unstoppable energy and his infectious laughter kept Durai and Vijaykumari on their toes. Every morning, he would hop on to his favorite cycle and peddle away to the nearby field. However, Ritish can now barely move without being in pain. His cycle remains untouched, and everything that once made him happy is only a distant memory. As much as he wants to get back on his feet, Ritish is helpless because of the deadly disease that has taken over his life – cancer.

Ritish has been undergoing chemotherapy for a month now. Often, Durai and Vijaykumari sit by his side remembering the day that changed all their lives forever. Vijaykumari tries her best to stay strong for Ritish. On the days when he barely speaks, she holds back her tears and tells him stories to try and cheer him up, but nothing makes him feel better.


“It began like any other day for us, but Ritish came back from school with a swelling on his thigh. We immediately took him to a local doctor who told us it was because of the heat. We weren’t fully convinced though. It was only in Chennai that we found out he has blood cancer. That was the moment everything changed for our little boy. He barely eats now and has lost a lot of weight. Every time he lifts his head from the pillow, all we see is hair. Now he has swellings under his armpits as well. Without treatment, cancer will only spread more rapidly.”

His helpless parents can’t save him despite their best efforts

Durai and Vijaykumari wasted no time in getting their son's treatment started. After selling the little jewelry they had and borrowing from family, Ritish's chemotherapy began. Unfortunately, it isn’t enough. Durai, who works as a security guard in a mall in Chennai, can’t afford the 4 lakhs needed to save Ritish. His monthly income far exceeds the monthly costs of Ritish's treatment and Durai has no way to overcome this financial hurdle.


“We’ve used every rupee we had saved. We can't even send our younger daughter to school anymore because we don’t have the money to pay the fees. We’ve put everything we have towards his treatment, but it’s not enough. Our family and the hospital has helped us as much as they could, but we can’t continue his treatment any further.”

Ritish needs chemotherapy to beat blood cancer, but his parents are at a dead-end. With all their savings exhausted on his treatment so far, Durai and Vijaykumari spend all day worrying. Ritish is eagerly waiting for the day he can go back home and play on his favorite cycle again. Only you can help save him from cancer.

Your support will save Ritish’s life.