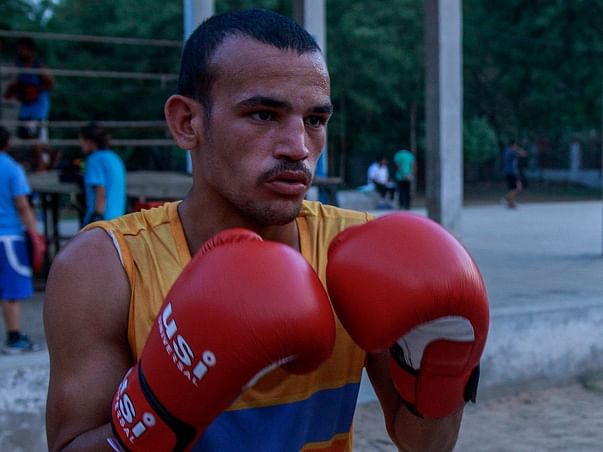 Share
“Boxing is the toughest and loneliest sport in the world"

Ravi Kumar was just 8 years old when he decided to pursue boxing as a dream and career. He was just 8 years old when he saw his local hero Jitendar Kumar, a boxer from his own village in the Indian state of Haryana, represent India at the 2008 Olympics.
He cycles 20 Kilometres every single day to train
At the age of 10, Ravi started undergoing serious training at the Vishnu Bhagwan Boxing Academy, BHIM Stadium.  Ravi cycles a distance of 20 kilometers from his village Devsar to Bhiwani and back, every single day to train for hours. His father earns a modest income of Rs.6000, an amount that barely covers the family’s daily essentials.

A fierce trainee and a devoted son

“My father has always been supportive of me. I could have joined him as a labourer, but his dream is to see me fulfill my dream.” - Ravi KumarThe

16-year-old who goes to school religiously as well lost his mother at an early age and always helped his father whenever possible.

Ravi, who has qualified once for the state championship in the 54-57kg category, is eager to qualify for the same this year to be held in October.  Roti, Daal and Sabzi are not enough ....
Ravi does not have money to eat nutritious food - On days when his father earns a good amount, he enjoys a good fulfilling meal. On other days, he tries to make do with what he has.  A boxer requires good boxing gloves - Ravi cannot afford his boxing gloves and currently borrows them from his peer at the Academy.  None of these factors have stopped Ravi from pursuing his dream, nor his spirit.
“I will come out winning. In boxing, in life. With the grace of God and all above, I know it in my heart.” - Ravi Kumar

With our support, this boxer can bring laurels to India. All he needs is some help to get nutritious food and a pair of gloves.  Funds raised through this fundraiser campaign will help Ravi move one step closer to his dream, India's dream of an Olympics medal.