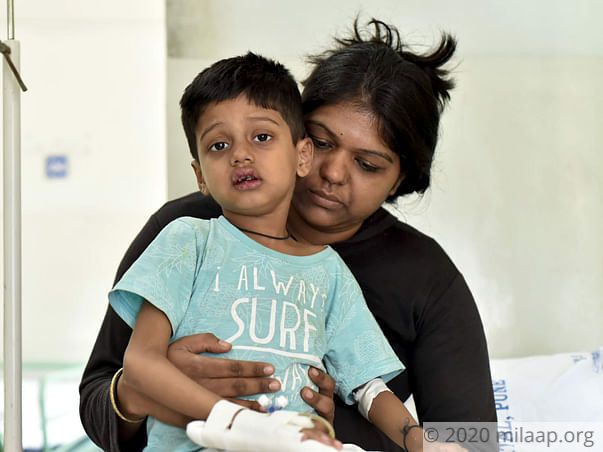 The weekend was always little Rachin’s favorite time of the week, as it was the only time he would get to spend quality time with his working parents, Shweta and Revan. Going to the mall to play games at the arcade, eat an ice cream or two and even grabbing some lunch – it was a family tradition in the Karodi household until Rachin’s worsening liver disease changed everything drastically.  Shweta had to abruptly quit her job to care for her ailing son, putting the family finances in disarray. Now on weekends, the best these parents can do is take their son to a park for some fresh air, as that's all they can afford.


Rachin, before his condition became worse

“More than 50% of our income now is spent on keeping him alive, whereas the other 50% is spent on paying off our home loan. We are living on the bare minimum now – spending every paisa very carefully and only on essential items like food and water. Our sole focus is saving our son’s life before it is too late, but we are failing at it,”-Shweta, mother

‘We thought his liver was fine, until he started vomiting blood recently’

Shweta and Revan consulted the best gynecologist in Pune, their hometown, and made sure every advice was paid heed to. Every new mole that appeared on his body, every new movement he made – she’d know at the first instance itself. This is how she noticed his bulging tummy when he turned 7 months old. A trip to the doctor revealed that he is suffering from Budd-Chiari syndrome, a deadly disease of the liver in which the hepatic veins are blocked. He underwent intensive treatment for 5 months after this, after which all his symptoms had disappeared. His parents breathed a sigh of relief then, not knowing that this deadly disease would come back to plague their child.

“6 months back, when I saw blood in his stools, I was shocked. I didn’t want to face the reality that my son’s liver was failing. And then when he started vomiting blood shortly after, I was told by doctors that my son was critically ill and he wouldn’t survive without a transplant,”-Shweta

This mother watches over her son all day and night, fearing for his life

After Shweta quit her job 6 months back, she has been engaged in the constant care of her son. “Rachin has not vomited blood after that scary instance a few weeks back, but I am very scared. What if it happens again? I have lost my peace of mind, but I am staying positive for the sake of my son,” says Shweta, adding that looking at Rachin and his activities, one cannot say that he is suffering from such a severe disease. “He rides his cycle, watches cartoons, laughs and plays like any other normal child. He also goes to a playschool. He even hasn’t lost his appetite – which is otherwise typical in children with liver disease. But the doctor has clearly said that he would not survive without an urgent liver transplant,” she adds.

Shweta is ready to give a part of her liver to save her son, but she can't afford the transpllant

Every day, Shweta goes to sleep holding her son close to her, in the hope that her husband, Revan will tell her the next day that he was able to arrange money and everything is finally alright. But her hopes have been in vain so far. Revan, who works as a professor in a Pune college, is the only earning member of the family now. They have already used up all their savings – spending heavily on his treatment from the time he was diagnosed till present.

These parents need your help to save their only son

Shweta and Revan have invested heavily – both emotionally and financially – to keep their son alive till now. They have no money left to run their household properly or even buy new clothes for themselves, but that is not their primary concern now. They want to save his life, but without enough money, they cannot do that.

UPI: rzpy.givetomlprachinka001@hdfcbank (Copy to clipboard)
Or
Click here to read the instructions before you make a bank transfer. 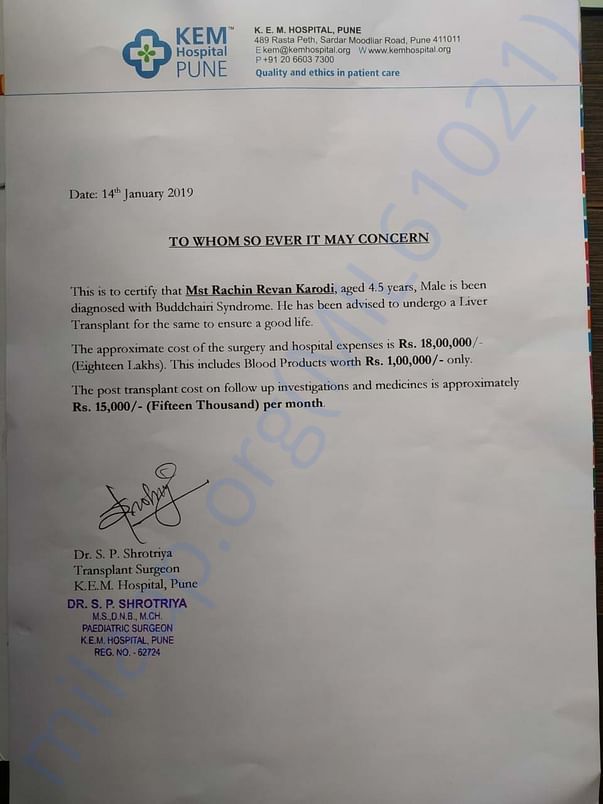 UPI: rzpy.givetomlprachinka001@hdfcbank (Copy to clipboard)
Or
Click here to read the instructions before you make a bank transfer.

Rachin is recovering well currently. He yet has not adjusted to his medicine, although that is just a matter of time. There were no major complications in his transplant. His albumin level went down a little bit and had a small infection of CMV. Both being very common post transplant. But now he has recovered from that too and soon he will be completely fine.

Here are some photos of him while he recovers :

Thank you for the wonderful support!

Here is a quick update!

Report fundraiser
See how thousands are crowdfunding for their causes on Milaap
Rs.1,724,025 raised 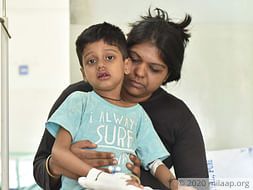