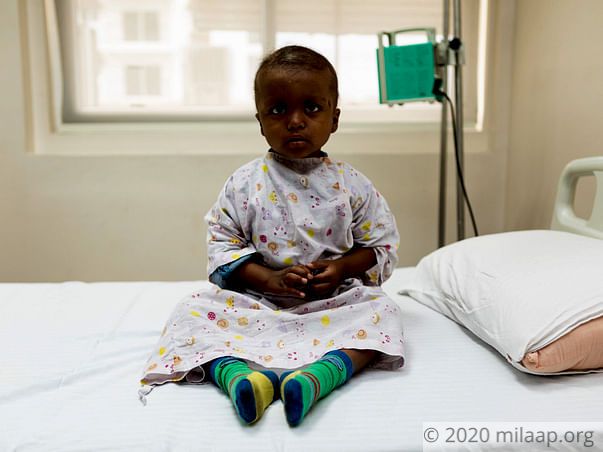 “Prachaswith would always spend his time at home playing and feeding the buffaloes. He used to be so happy and full of life,” recalls Girish as he looks at his son who looks weak and tired because of the dreadful brain cancer that has taken over his childhood. When Prachaswith asks his father for how much longer he needs to take painful needles every day, Girish would console him saying that it will be over soon. But deep inside Girish constantly fears that he will lose his only son if he doesn’t continue his treatment.

Prachaswith is just 3 years old, but he’s already been through so much pain and suffering. He needs radiotherapy, which is the only way for him to recover from this fatal disease but his poor parents have exhausted all their funds and need help.

Being the only child, little Prachaswith was pampered by his parents Girish and Kalpana. He spends most of the time riding his tiny bicycle in the backyard of their tiny home in Nizamabad, Telangana. And sometimes he would help his farmer father by feeding calves and playing with them. However, Kalpana grew concerned when Prachaswith began vomiting regularly for an extended period of time. The local doctors assured them that it was nothing but a viral infection and prescribed medicines for him to get better.


Prachaswith when he was hale and hearty

Prachaswith got better, but a few days later he started vomiting again. Girish and Kalpana also noticed that Prachaswith seemed to have very poor balance and his condition worsened so much that he was unable to sit up by himself. His parents understood that it was more serious than just a viral infection and so took him to Hyderabad, Telangana for better consultation.

He was diagnosed with a cancerous tumour

After a few tests, Prachaswith was diagnosed with medulloblastoma, a type of cancerous brain tumor positioned towards the back and bottom of the brain, that can spread to the entire body if not treated on time. Prachaswith underwent surgery immediately and it was after the surgery the doctors found out that he also needs chemotherapy and radiotherapy to fight this cancerous tumor. He has currently undergone 6 cycles of chemotherapy and needs to undergo radiotherapy to completely recover. 'We were devastated and in complete shock when we got the news. I wanted to save my son anyhow and so, with great difficulty, I arranged money for his operation and his treatment, but even that wasn't enough.’ says Girish who is still struggling to arrange money for his son’s treatment.


Prachaswith during his better days

“I don't have even a rupee left to continue his treatment”

He has one last chance for a healthy life

Prachaswith longs to go back home so that he can look after those little calves and ride his tiny bicycle. Girish and Kalpana did everything in their power to meet the treatment expenses but even that wasn’t enough. Little Prachaswith needs radiotherapy to fight brain cancer and he can only do it with your help.

Girish and Kalpana need your help to save their son

UPI: rzpy.givetomlpprachasw001@hdfcbank (Copy to clipboard)
Or
Click here to read the instructions before you make a bank transfer. 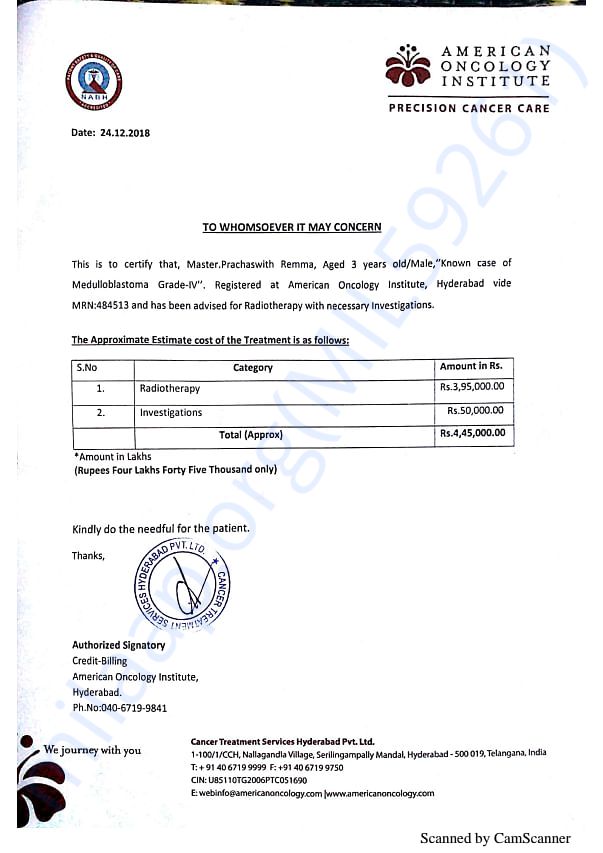 UPI: rzpy.givetomlpprachasw001@hdfcbank (Copy to clipboard)
Or
Click here to read the instructions before you make a bank transfer.

Prachaswith is doing well. He has completed his PET CT and radiation and got discharged.

The kid has successfully completed the treatment. Now the kid is doing good. The family is advised to be in continuous follow-ups with the doctor.

Report fundraiser
See how thousands are crowdfunding for their causes on Milaap
Rs.480,351 raised

God Bless dear little baby. Prayers to God Almighty for speedy recovery, the best of health and all God’s Grace.

God Bless dear little baby. Prayers to God Almighty for speedy recovery, the best of health and all God’s Grace. 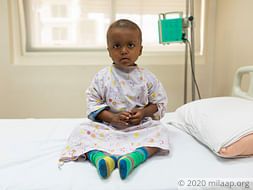