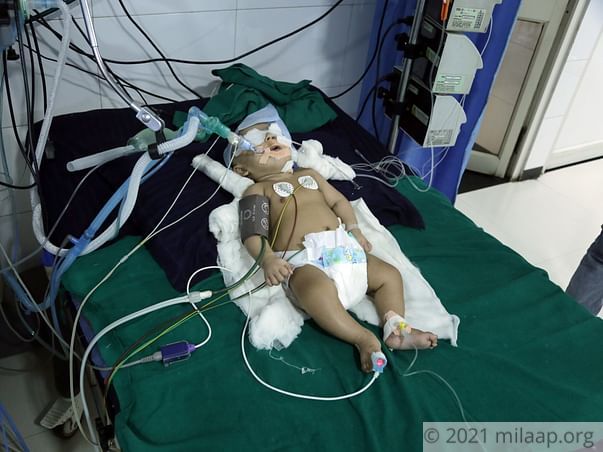 Every night before he goes to sleep, Nitin counts the money he has left with him. Last night, it was just a few hundred rupees. He would soon have nothing. Nitin, Kavitha and their older son Devraj have spent the past two weeks sleeping in the compound of the hospital, sharing meals and a few tears – in a desperate attempt to save money for baby Parth’s treatment. He’s fighting for his life in the ICU.

“He would breathe like something is stuck in his throat. It was loud, and sounded so painful. Every time I held him, I could feel his little body tremble with every breath he took. There were moments when I thought we’d lose him.” – Nitin, father

At 2 months, Parth started smiling every time his parents called out to him. That smile was an indication that Parth was fine, a sign they never saw with their older son. Devraj (6) has autism (a serious developmental disorder that impairs the ability to communicate and interact), and while his parents were a little worried about how he would react, Devraj took to Parth instantly. They were happy.

“ We see the way Devraj is with Parth. He has become calmer, the protective older brother. A side we never thought we'd see. But Parth fell sick when he was 2.5 months old. Fever, cold, uncontrollable coughing. He cried all night. Watching him, Devraj too was agitated.”

‘How can we afford to care for two children with special needs?’

What the doctors at a hospital in Himatnagar, Gujarat thought was pneumonia, turned out to be viral encephalitis, the swelling of the brain caused by a virus. If left untreated, it can be life-threatening and lead to seizures and brain damage. His parents, then, would have to care for two children with special needs - a thought that devastated them.

On 13 February, he was rushed in an ambulance to Ahmedabad, Nitin and Kavitha by his side as he lay unconscious.

With a daily income of Rs. 300/day, Nitin can’t continue his baby’s treatment

“We’ve been here for nearly two weeks now, waiting for Parth to wake up. Yesterday, he finally did. He even started breathing on his own again. But he’s still not out of danger. My wife cries every time we go inside the ICU. It’s difficult to get her out of there, she just wants to be by his side.”

Parth needs to stay in the ICU for at least 2 more weeks to completely recover. Nitin has no means to continue his treatment any longer. A cook in a small hotel in Himatnagar, Nitin has spent 1.5 lakhs so far by selling the jewellery they had and by borrowing from relatives. The daily ICU expenses are at least Rs. 10,000. Along with this, he also has to spend Rs. 4,000/month on Devraj's medication and physiotherapy. But Nitin has not gone for work in 2 weeks. He desperately needs your help to save his son. 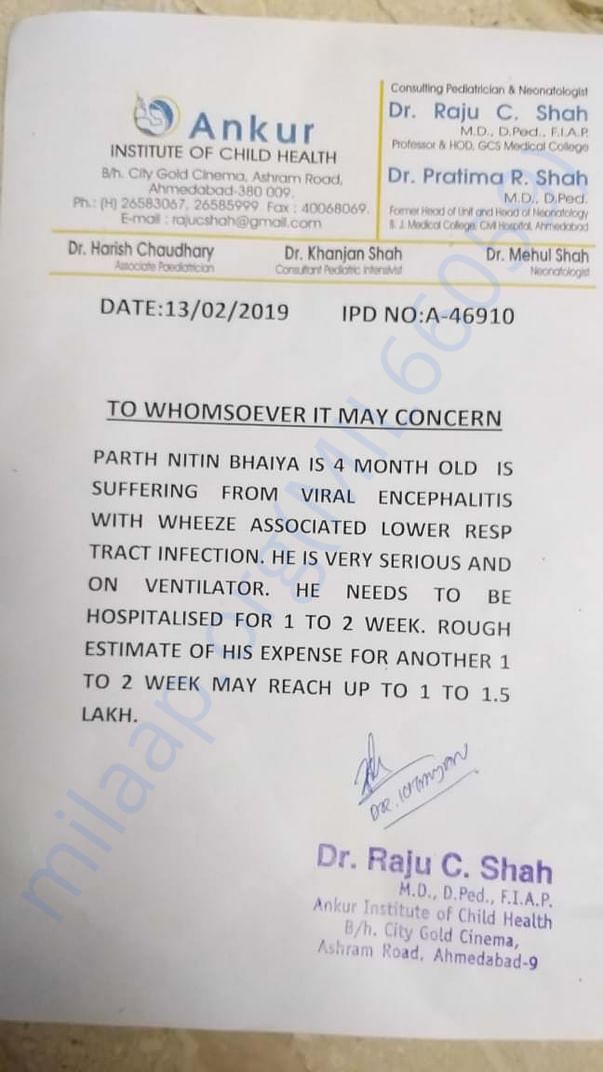 Thank you all for you love and support.

Parth has recovered and he was discharged from the hospital as well. Thank you all very much.

Parth is doing well and is recovering. He is responding to the treatment and will be discharged from the hospital soon. They will have to regularly come to the hospitals for check up as advised by the doctor.

Scan & donate with any app
check_circle_outline Download payment receipt
Report fundraiser
Know someone in need of funds for a medical emergency? Refer to us
Rs.14,362 raised

get well soon little one

Well wishes for our future of nation

get well soon little one

Well wishes for our future of nation 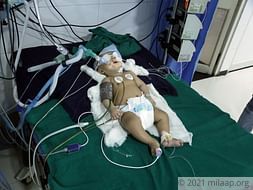