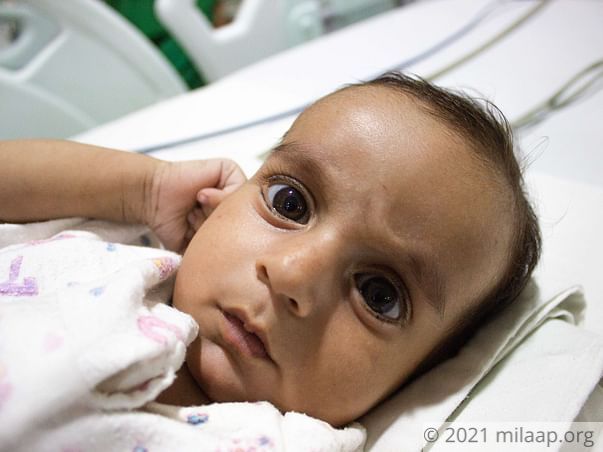 “My baby cannot even drink a mouthful of milk without choking on it. He hasn’t had a single day of respite from persistent cold that suffocates him; he cannot go on living for long like this, but my husband and I don’t have the means to save him.”-Simran, mother of 5-month-old Parth.

Ever since Parth was born, his life has been revolving around hospitals

Baby Parth is the second child of Simran and Jiten who live in a small Haryana town. Their 3-year-old daughter, Harleen and Jiten’s elderly mother, who always suffered from age-related illnesses, also stay with them. The family has always had to make severe compromises in case of medical emergencies because of this, owing to their lower-middle-class background. But they did not leave any stone unturned when Baby Parth was born, and even set up a beautiful crib in their humble home. He had not got the chance to spend enough time sleeping in it before he started falling very sick when he was just a month old.

“Even though he looked smaller than normal babies his age, we never suspected anything was wrong with him until the day he turned blue from breathlessness. His eyes had rolled up and his entire body was shaking. And from that day, my poor baby has not been able to come home as he was always being rushed from one hospital to another due to recurrent pneumonia.”-Simran.

After months of being admitted in various hospitals in Haryana, Baby Parth was diagnosed with Total Anomalous Pulmonary Return, a congenital heart disease where the four veins that take blood from the lungs to the heart do not attach normally to the left atrium (left upper chamber of the heart). Instead, they attach to another blood vessel or the wrong part of the heart. This causes lower levels of oxygen in the body causing acute breathlessness, and can even lead to heart failure without urgent surgery. In Parth’s case, this disease was also the cause of recurrent lung infection. Simran was taken aback when the doctors informed them of her son’s bad heart, as she’d always taken extra care during pregnancy, never forgetting to take medicines or go for regular scans. She has not been able to come to terms with the fact that she could lose her son at any moment, as the family is too poor to afford treatment.


“My poor baby is losing weight as days pass. All he does is cry; but even crying suffocates him after a while. I have never seen him smile ever since he started having breathing difficulties along with bad cold. I feel guilty that I am not doing enough to protect my baby, but I am helpless.”-Simran.

Ever since the doctors told him that an urgent open heart surgery is the only way that Baby Parth can be saved, Jiten, a small shopkeeper, has been running from pillar to post to arrange money. But he has only been able to arrange Rs 35,000 for a surgery that costs a whopping Rs 4 lakhs, resulting in a delay in surgery. Before his baby got sick, he was able to go regularly to work and earn Rs 8,000 a month but now, he has become very irregular now as he has come to Delhi from Haryana in a last and desperate bid to save his baby boy. This poor father is running out of time, and his baby is more critical than ever.

Baby Parth is suffering from recurrent lung infection due to a severe heart disease. An urgent open heart surgery is the only way that this poor baby can survive. He needs it immediately, but his poor parents cannot afford it. If he gets the surgery, he will be able to lead a normal life and grow up to take care of and provide for his family one day.