2-Year-Old’s Fatal Condition Has Left Him Blind And Motionless | Milaap
This campaign has stopped and can no longer accept donations. 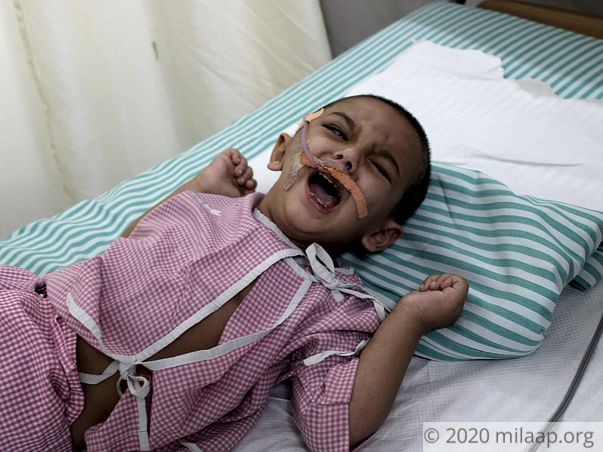 “My Nirbann is just 2-years-old but he plays football. From the time he started walking, he loved kicking the ball around and the way he used to play football, left most of our relatives amazed. I always told my husband that he would become a football player when he grows up. But for the past few days, the ball has remained untouched. My little boy suffers from a dangerous disease and he suffered a stroke 3 days back. He has lost his vision and can’t walk anymore. We will lose him if we cannot continue his treatment ,” - Susmita, 2-year-old Nirbann’s mother.

6 months ago baby Nirbann had a normal fever. But a few days later, when he suddenly couldn’t walk anymore, his parents, Susmita and Newton sensed something was terribly wrong with their baby. They consulted a doctor. Soon they came to know that his inability to walk was a sign of a fatal condition in which there is a narrowing of certain blood vessels. With initial treatment, he began walking again temporarily.  Just when the parents thought that they got their son back, his fever was back.

“ When his fever didn't subside. I was scared that this time too he will lose his ability to walk. But it was worse. My little son lost his vision. He kept screaming as all he could see was complete darkness. I constantly held him in my arms, but nothing seemed to comfort my baby. His painful screams haunt whenever I try to close my eyes.”- Susmita

Baby Nirbann underwent a surgery on 8th of October. But instead of recovering, he started bleeding internally. The bleeding became so severe that he had blood clots on the left side of his brain and suffered a stroke 3 days ago.

His condition is very critical now. He needs to stay in the intensive care unit to stay alive now. After suffering a stroke, Nirbann cannot bring himself to speak whatever little he picked up so far. All he can do now is cry in pain.


“He has always been very obedient and adjusted to the surroundings very well. He stayed with his grandparents and threw no tantrums when Newton would go to work and I would go to college (as I am still doing my degree). Being the only little child in our family, he was very much pampered. Now, we can't believe that we are on the verge of losing him. This has left the entire family devastated."- Susmita

Newton had a decent income with which he could manage to give his family a normal life. But for the past 2 months, he hasn’t been able to work and is buried in debt. For Nirbann’s treatment alone he has spent Rs 3 lakhs so far. He had to borrow to afford daily meals. Newton and Susmita doubt if they will ever be able to repay the debts, but now all they know is that they have to save their baby. But to save him they need another Rs 4 lakhs which is impossible for them to arrange.

2-year-old Nirbann’s arteries are constricted. Despite a surgery, he suffered a fatal stroke and is now blind and motionless. The poor parents have exhausted everything in the past 2 months. They can no longer find a way to save their only child. 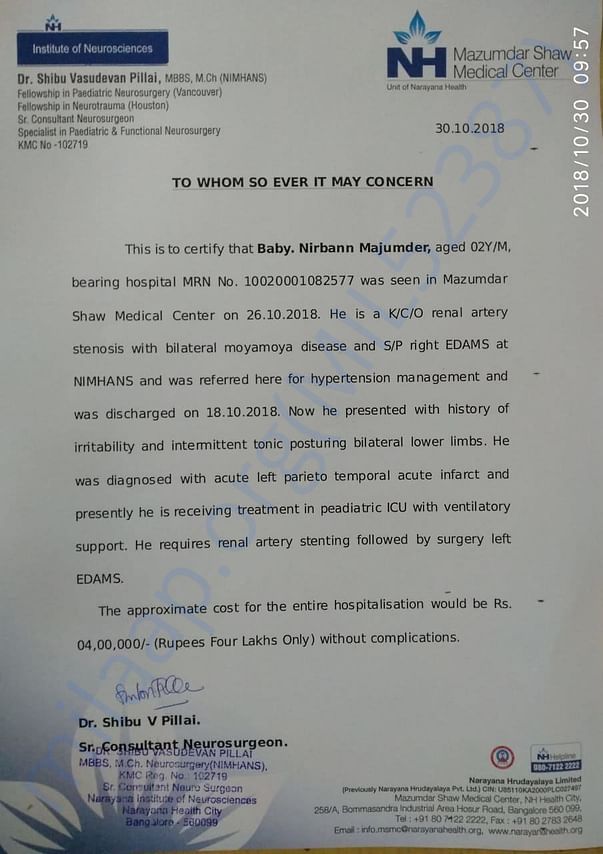 Nirbann had visited the hospital for MRI brain sedation, MRI perfusion and VFSS. We will keep you all posted about his health.

Thank you for supporting Nirbann.

Nirbann has undergone the first surgery that was a cardiac surgery. He was discharged, but he needs to undergo another surgery soon.

Report fundraiser
See how thousands are crowdfunding for their causes on Milaap
Rs.406,952 raised

Donated to this campaign via Paytm? Click here if you can’t find your donation listed below.
R
RAJKUMARDAS donated Rs.501
A
Anonymous donated Rs.2,500

I wish his new healthy life

Donated to this campaign via Paytm? Click here if you can’t find your donation listed below.
R
RAJKUMARDAS donated Rs.501
A
Anonymous donated Rs.2,500

I wish his new healthy life 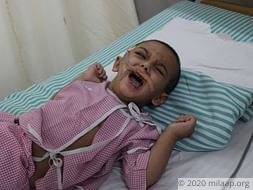