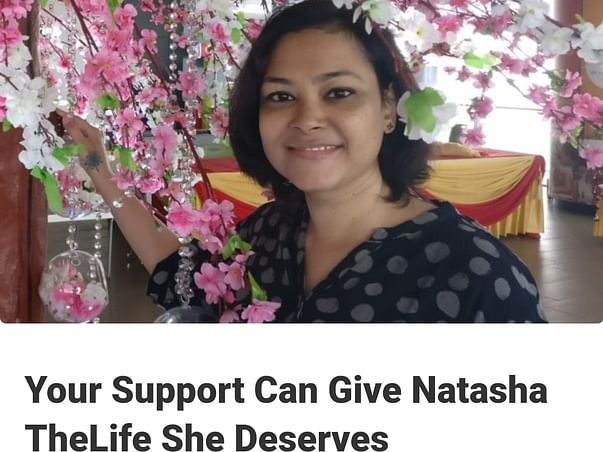 
As you can imagine, the months that followed her diagnosis were incredibly stressful, confusing, and scary, while searching for, trying to understand, and assess treatment options. After months of effort, Natasha was lucky to be enrolled into a program arranged by the Max Foundation that treated her with Gleevec, which is medication in the form of a tablet that allowed Natasha to live a life with some sense of normalcy. Additonally, the medication would allow her to avoid the harsh and highly invasive Chemotherapy treatment.

Few years later, Natasha was blessed with a beautiful 7.5 lbs baby boy Jared. Her joy was unbounded but short-lived. Tragically her beloved baby boy Jared, at just 2 years of age, died.Natasha's whole world crumbled right in front of her eyes, and yet somehow, in the months that followed, she found the courage to pick herself up from her devastating loss, and remain functional. Despite her grief, Natasha was available to help anyone who needed her, and lived her life with compassion and empathy for all. But life had more heartache in store for her.


In 2011 divorce between Natasha and her husband was filed.. Soon after that, she picked herself up by the bootstraps, and being the strong independent woman that she is, started to rebuild her life.


Over the last few years, while carrying the burden of her grief, and the anticipation that her body would grow resistant to her Gleevec treatment any day, Natasha found work as a Learning and Training Contractor, and excelled at it. She continued to support herself and her elderly parents, and slowly started to create a new normal for herself.


In the past months, Natasha's body has become resistant to her Gleevec treatment. At this point in time, Natasha has two treatment options:


1. Treatment with Ponatinib - a drug which is a tyrosine kinase receptor inhibitor. It is not available in India, and would cost her an average of 500,000 INR (approximately $7,000) per month for the rest of her life.


2. A bone marrow transplant, which will leave her bedridden for the next 3-5 months, and intense home-recovery for at least one year. The post-infusion process consists of a long list of complications that could occur, and will also require her to have her blood tested twice a week for 4-6 months, along with other checkups that would monitor her recovery process.


Natasha felt hopeless until new DNA testing found a donor with a perfect DNA match -- her brother. It is a God-given opportunity for her to have a chance at life, and it would be heartbreaking if we were to loose her after all these years of her struggle, simply because she didn't have the ability to pay for her life-saving procedure.


Included in this appeal are a couple of pictures of Natasha, so that you may see her sweetness, her strength, and her vulnerability. If you feel drawn to donating any amount big or small, all and any of it will be received with immense gratitude.


You can make a donation here, or help us spread the word to help save the life of our friend Natasha.


#An amount of 30lakhs+ urgently needed to be raised