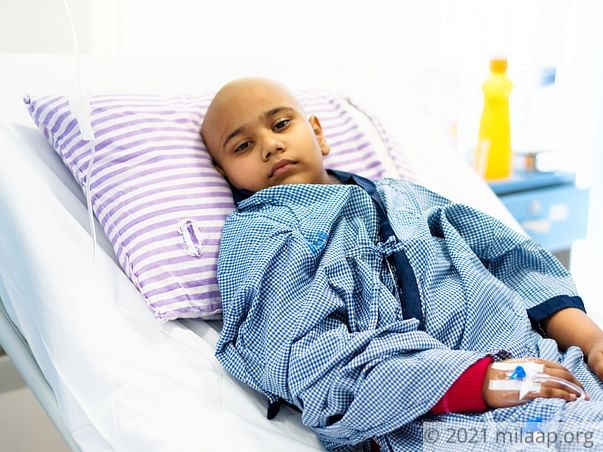 Share
Eight months back when Ripti tripped and fell down on the playground, neither Raju nor Madhumita could have imagined that this would be the starting point of their daughter’s fight with cancer.

“We thought it was just a blood clot on her chest that had turned black. However, the clot didn’t go on its own. To our horror, a tumor took its place. Now, even after a surgery and 10 rounds of chemotherapy she isn’t getting any better,” - Madhumita, mother.

An old pic of Ripti

The kindergarten kid doesn’t know what cancer is

Ripti is tired of going to the hospital for her treatment. She keeps asking her mother when all of this would end. But the little girl is unaware that the tumor in her right chest will only get cured if she continues with the treatment.

“Ripti has no idea what cancer is, she thinks she is losing her hair because of the medicines she is on. We haven’t told her otherwise,” - Raju, father.

The 6-year-old’s body has been bearing the brunt of harsh chemotherapy.The chemo has made her cranky - she hardly smiles any more.

“She used to make silly faces and dance around the house when she was happy. Her favourite toy used to be her teddy bear. Now the big teddy just collects dust on the corner of our house. Pain and suffering has become a regular part of her day.”

The family has spent about Rs 3 lakhs in the last eight months on Ripti’s treatment. They need Rs 7 lakhs more.

“I have seen how cancer snuffs life out of people. I know my daughter doesn’t have much time but Rs 7 lakhs is a lot. Unless I get help, I have to stop her treatment.”

Raju has a small shop in Kolkata where he sells imitation jewellery. He makes about Rs 10,000 a month - but with the rising prices of things, that is hardly anything. On top of that, Ripti’s illness has thrown him off the track. He doesn’t know how he will get his daughter treated without your help. A small contribution from your side will bring back the lost happiness of the family.

Your support can save Ripti's life