An Urgent Transplant Is The Only Way Barber’s Son Can Defeat Cancer | Milaap
This campaign has stopped and can no longer accept donations. 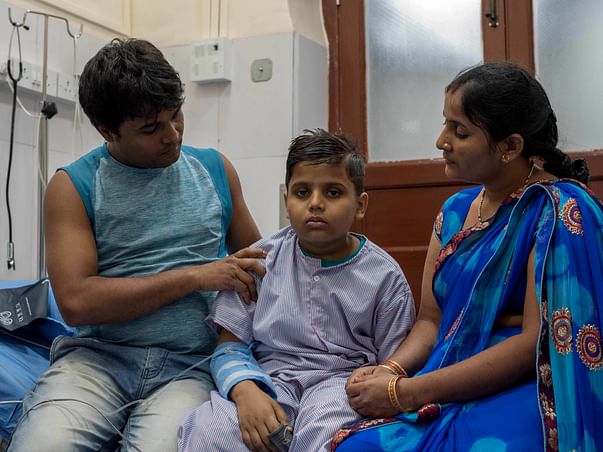 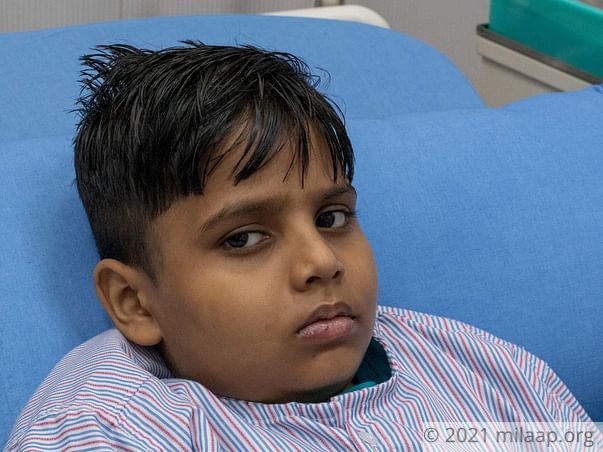 Previous Next
Kundan was such a meticulous student once that he’d have his entire day planned out in advance. He woke up early, prayed, brushed up on lessons learned the previous day and happily went to school every day. “Even after he came back from school, he would play for only half an hour. He was so focused on his studies that kids would make fun of him. But we were always so proud of how responsible he was at that tender age itself,” reminisces Ajay, his father.

But from the past 4 years, after he was diagnosed with deadly blood cancer, Kundan’s life has been drastically different.

Kundan has forgotten what being in school felt like, as the joy of being amongst peers and learning new things has been replaced by the agony inflicted by strong cancer medicines .“But the worst of all – my son, who used to be curious about everything in life is now passive and disinterested in everything. I can see it in his eyes,” says Ajay who does not have the means to afford his son’s bone marrow transplant – the only way he can be saved.

Kundan, when he was better

In the last 4 years, Kundan has only been cancer-free for 5 months

Kundan was diagnosed with blood cancer at the end of 2014, when he was just about to be promoted to second grade. “He was an active kid who never rested for a minute. He would always be doing something – either studying or running around the neighbourhood with his friends. After he started getting recurrent fevers, we took him for a routine test at a clinic near our hometown of Azamgarh where the doctors told us that he has cancer and that we need to go to Mumbai quickly. Ever since then, he has been undergoing treatment in Mumbai and the entire family (including their two younger daughters) moved here with him,” says Shakuntala Devi, his mother.

This little boy was declared cancer-free after around 2.5 years of undergoing strong chemotherapy. The family relocated to their village in the hope that Kundan had become healthy once again. Although doctors had suggested rest, Kundan persisted that he wanted to go to school right away. For 5 months, everything was a breeze – the family was slowly getting used to their new life when he started getting fevers again. He was diagnosed with cancer again. He has been undergoing chemotherapy for the past few months, but doctors say that is not enough to save his life anymore. He needs a bone marrow transplant – or he could end up losing his life.

‘I don’t think I will be better ever, will I papa?’

Now, Kundan has become so weak that he can hardly get up from bed to use the washroom. He is always in a daze due to the strong medicines. When he gets a little energy, he asks his dad why he can’t have a normal life like other children. Earlier, Ajay used to lie to his son saying he just has a fever and will be alright soon, but now Kundan has become more perceptive and understands that it is a lie. “The other day he asked me if he will ever be better, if he was going to die, tears streaming down his cheeks. I was dumbfounded. I hugged him and said I won’t let anything bad happen to him, but the truth is I don’t have the money to save him,” says Ajay.

This barber can save his son with your help

It was quite easy for Ajay, a barber, to find work in a saloon in Mumbai even though the city was alien to him. But the problem was that he has not been able to go to work regularly due to his son’s hospitalization.

“I had to run from pillar to post for every small thing – whether it is buying medicines or meeting doctors for updates. The days I do go to the saloon, I earn anywhere between Rs 200 to Rs 800; it depends on which day of the week it is. But with such a meagre income, I cannot manage Kundan’s medical expenses. I borrow regularly from the kind people in our village and have already incurred a lot of debt. I cannot pay for Kundan’s expensive transplant, please help me save my son,” he begs.

Your kind contribution can help this barber save his son 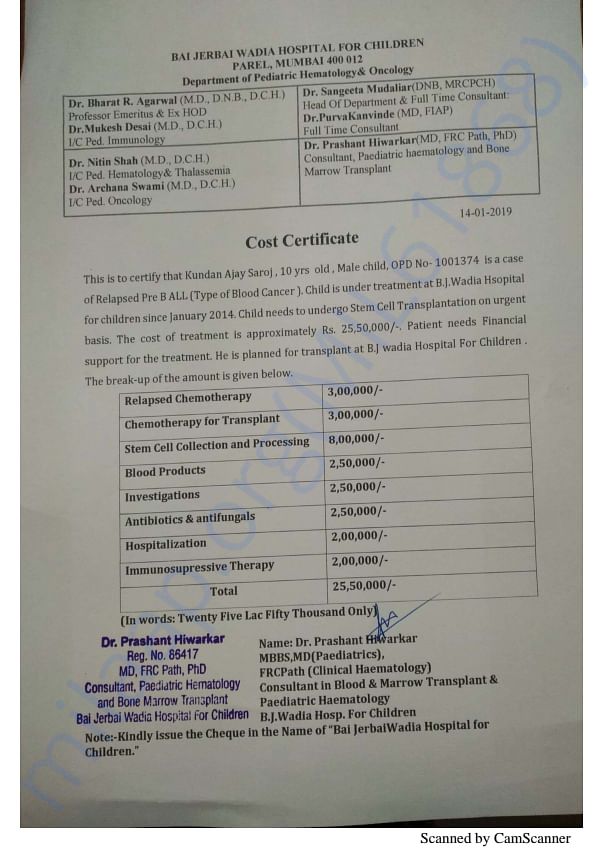 Kundan has undergone the bone marrow transplant and is recovering.

We would like to inform you that Kundan is a relapsed case of ALL. We started with high dose chemotherapy. After chemotherapy also his MRD was positive. In cases like these we cannot go ahead with the transplant.

Please keep him in your prayers. Thank you so much.

Scan & donate with any app
check_circle_outline Download payment receipt
Report fundraiser
Know someone in need of funds for a medical emergency? Refer to us
Rs.79,506 raised

28 Supporters expand_more
This campaign has stopped and can no longer accept donations.
$150 Million +
Raised on Milaap
Are you in need of financial support for medical or personal emergencies, or a social cause?
Start a fundraiser
Or
Know someone in need of funds for a medical emergency? Refer to us
Campaign organizer contact_mail
KK
Kavita Kanojia
Beneficiary: Kundan Saroj info_outline

Donated to this campaign via Bank transfer/QR Code? Click here if you can’t find your donation listed below.
S
Suresh donated Rs.500

Hope and pray for complete cure

God bless you! Get healthy soon.

Hope he gets well soon

Donated to this campaign via Bank transfer/QR Code? Click here if you can’t find your donation listed below.
S
Suresh donated Rs.500

Hope and pray for complete cure

God bless you! Get healthy soon.

Hope he gets well soon 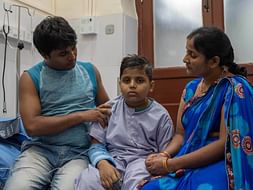