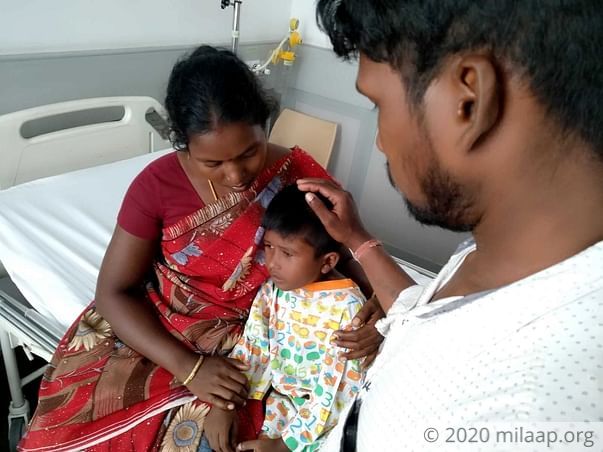 “I have barely Rs 500 in hand. How will I get him a surgery to save him? We will not get CM's funds again. How will we gets funds for a surgery when we don't even have enough to go to Chennai?” –Kalamadi, 6-year-old Kirutheesh's mother

Till Kirutheesh was almost 3, he did not walk, talk or even eat. His parents were worried that he would die of starvation. They found out that Kirutheesh actually had multiple heart defects causing this weakness. He needed two surgeries of which his parents have been able to arrange for only one. To save their child, they need to arrange for another surgery immediately.

It is normal for Kirutheesh to watch other children play and run. He understands that he can't play like them. If he runs, he knows will become dizzy, fall and faint. As he grew older, he started to see that his chest has a scar that his brother and sister don't. He wonders how he got hurt. The scar is a remnant of the surgery that has kept Kirutheesh alive till now.


“Hospital helped us apply for CM Funds. We borrowed Rs. 50000 and got Rs 1.5 lakhs from the government for his surgery last time. We thought we had saved him. But on the day of discharge they told us – that he would need another surgery at 5. Without it, he will die.” –Kalamadi

Kirutheesh is the middle child. He has an older brother and a younger sister. Because of his heart condition, his parents did not send him to school until this year. They pleaded with his teachers to make sure he didn't speak much, or to see that no bullies beat him – because it could kill him. He might have enjoyed school, if not for his own growing unquiet at his health.

“The regular visits to the hospital have really scared him. He was too young to say anything before. But now, the minute he sees the hospital, he tries to run away. He cries till he is out of breath. Only when we come out, is he able to finally say - I don't want to come to the hospital, Amma.” –Kalamadi

Every trip to the hospital is exorbitant for his parents

Kirutheesh's father, Kali Doss, is a fisherman who earns barely enough to feed the children. For treatment, his parents travel from their village in Sirkazhi, Tamil Nadu to Chennai. In the searing heat, they parents seek shelter in travel buses because they can't afford to get a room in Chennai. They even starve to buy two meals for Kirutheesh. But every visit they only face setbacks.


“We have to spend over Rs 3,000 every time we go to the hospital. My husband is a fisherman, who makes only just a little more than that in a whole month. We barely have anything left – how will we get his surgery done – or even go to the hospital again?” –Kalamadi says.

Kirutheesh needed a surgery for his heart condition a year back. Three hospitals in Chennai refused to treat him because his condition is so critical. It is only because of Kalaimadi's persistence that she found a doctor willing to treat her child. Her strength can only take her so far and she needs support to get Kirutheesh the surgery.

Your contribution can save Kirutheesh.

UPI: givetokalidoss@yesbankltd (Copy to clipboard)
Or
Click here to read the instructions before you make a bank transfer. 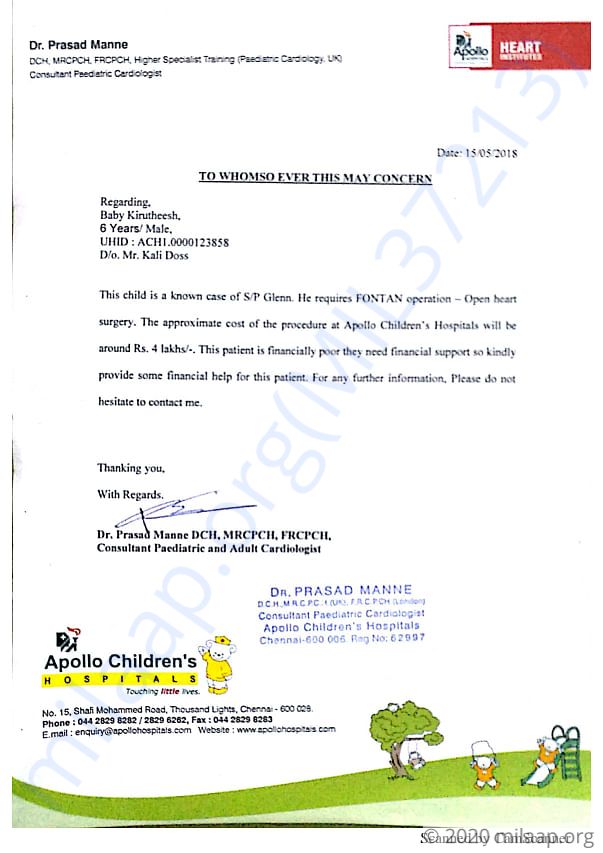 UPI: givetokalidoss@yesbankltd (Copy to clipboard)
Or
Click here to read the instructions before you make a bank transfer.

Report fundraiser
See how thousands are crowdfunding for their causes on Milaap
Rs.14,710 raised

Donated to this campaign via Paytm? Click here if you can’t find your donation listed below.
RK
Rajesh donated $40

Donated to this campaign via Paytm? Click here if you can’t find your donation listed below.
RK
Rajesh donated $40

You are sending a message to
Pradeep
Go back 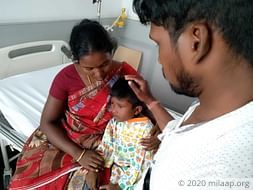