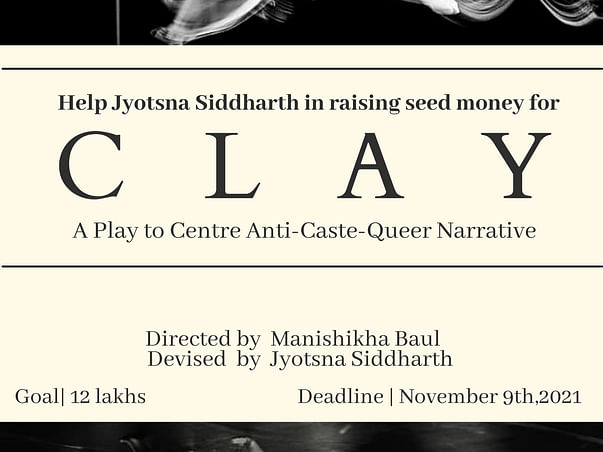 Share
I am Jyotsna Siddharth, an Actor, Activist, Artist and Writer been writing a play on caste and body located in India over the past one year - 'Clay'. Being a Dalit Queer actor, this play is part anecdotal and part fictional telling a story of an urban Dalit woman in several fragments and figments of her life. She traces her journey about love and relationships, intricately woven with the affect of caste- politics, desires, collective memory and assertions through stories.
This fund raiser aims to have a public ownership over private sponsorship while we chase the very few and rare grants available in India for theatre making, especially when it is on caste and queer body. Your help is immensely valuable and sought to make this compelling work find its fruition. We have been working on this for the last one  year without any monetary support and hence reaching out with our deepest desire to generate funds for enabling the making and sharing of this work.
It is perhaps one of the first few independent plays performed to centre anti-caste-queer narrative over a long drawn performance in Hindi and English. The seed money will allow us to continue working with more rigour and clarity, bringing in new people with ideas and resources, to be able to put together the play. The effort towards this play, eventually, intends to bring out new perspectives, aesthetics and nuances to understand caste playing out mostly in urban, elite spaces. This play will contribute to the intersectional work with respect to caste and gender within theatre, entertainment and acting landscape in India and hopefully globally.
Clay will be amongst one of the few devised physical theatre plays on Caste written, devised and performed by me and artistically conceptualized, facilitated and directed by Performer- Director Manishikha Baul. Manishikha has been an Odissi dancer for the most part of her life. She engages with different aspects of contemporary performance and performance building, arts management, organizing socio-political movements and facilitating as well as teaching young adults. She is an embodied movement practitioner and has spent her time learning Devised Theatre and Performing Arts under ArtHausBerlin in Berlin, Germany.
My tryst with her started when I was an actor in an ensemble play that she was teaching and directing a few years ago. However, what resonated and aligned for both of us was to treat 'resistance' as 'love' and delve into the aspect of caste that plays a fundamental role in the aesthetics of the body as seen, touched, felt, played out and observed in popular narratives. This camaraderie and deeply felt angst set us both on a drive to create this work. This year we focused on the need to raise funds to be able to premier Clay in 2022. We hope to make this a multicity debut given your financial support.
We wholeheartedly welcome any contribution; small or big that will enable us to bring Clay to you.
Bio
Jyotsna Siddharth: Jyotsna is an actor, self taught artist, intersectional queer activist and writer. Jyotsna’s practice spreads across intersections of social- art, activism, theatre, development in anti- caste, feminist and queer spaces. Their interests are multidisciplinary, experimental and fluid from embodied practice, conducting workshops and building community dialogue to supporting systems for making multiple medium work collaborative, intersectional and inclusive. They come from a marginalised caste background and their work aims to push boundaries of individual and societal comforts and criticality, to deepen nuances, compassion and empathy.
Jyotsna is a recipient of Chevening Scholarship, British High Commission, United Kingdom (2014-15) In 2020, Jyotsna was featured as 40 under 40 by Edex and The New Indian Express, their work has appeared in Times of India, The Hindu, Roundtable India, Savari, Feminism in India, Smashboard, Ashoka Literature Festival, Mid- Day, The Rights Collective UK, Feminism in India, The Swaddle, The Citizen, DHRDNet, UN Women, India Culture Lab, Grazia India, News18, Khirkee Voice, Khoj and more. Currently, Jyotsna is raising funds for Clay, co- strengthening an informal group of theatre practitioners along with co- running and supporting a collective space of 26 artists in Delhi - Khuli Khidki.
Manishikha Baul: Manishikha is a performing artist who has primarily been an Odissi dancer. In the recent past she has been engaged deeply with the shifting socio-political fabric of India through her choreographic and directorial work. She has been actively part of the NotInMyName and ArtitsUnited!  campaigns. As a movement practitioner her quest lies in the politics of the body - breathing, living, moving, navigating and negotiating spaces of caste, class, gender, religion and other such social constructs. So her work is seeped in exploring the relationship and intersection of these, affecting a human physical body. Besides years of training in Odissi under various gurus of the tradition, Manishikha is currently pursuing her studies in Devised Theatre and Performing Arts from ArtHausBerlin (formerly under LISPA-Berlin) in Berlin. She has taught under Ashoka University as a visiting professor and conducts workshop with amateur and non-professional theatre artists often. As an independent artist she claims space through performances and workshops in this un-organized sector of arts and labour.