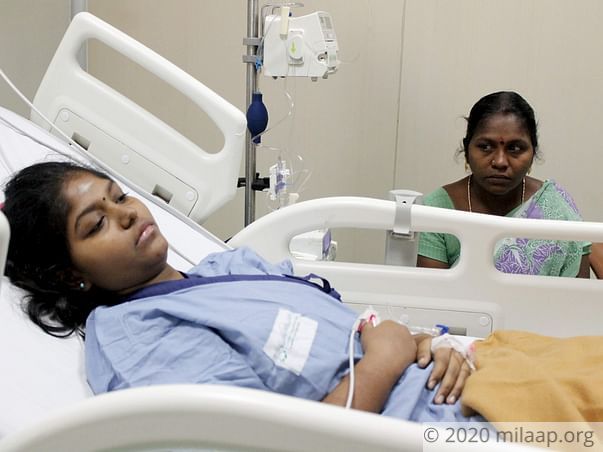 There was nothing that gave 13-year-old Jayashree more pleasure than dancing, weaving and discussing her day at school with mother Parimala. After Jayashree’s father fought and left them, they have been each other’s solace. When Parimala became busy with housework, Jayashree would single-handedly take care of her baby sister, 8-month-old Tejashree without complaining. Their small family was happy, despite the obstacles that life threw at them. After Jayashree was diagnosed with cancer, Parimala saw that her daughter had transformed drastically - both mentally and physically.


“My child, who used to give me strength to face challenges boldly, is filled with fear now. She asks me, ‘Amma, what disease do I have? Why do they put needles in me for no reason? Am I going to die?’ I can see it in her eyes that she knows that something is very wrong. I have been lying to her about her condition for long, but she tells me that she feels that her end is near. It kills me but I don’t have enough money or support to save her.”-Parimala, with tears in her eyes.

Jayashree had just been promoted into 8th grade in June, and she had so many plans for the upcoming months. One of them was joining the dance club and performing at various events. Jayashree loved dancing so much that tapping her feet in stressful situations made her feel much better. She also wanted to score better in exams than the previous year. But all those plans have been pending ever since she was down with fever two months back.


“Jayashree was not one to worry about a small fever. For the first two days, she pretended like everything was fine. On the third day, my child could not even get up from bed in the morning. I took her to the local clinic, but none of the medicines that they gave worked. She was becoming weaker every day, and I was getting more worried about her. I just hoped for it to be nothing serious.”-Parimala.

The fact that her dear daughter had cancer broke this mother’s heart, and she has still not recovered from the shock

When Jayashree was not getting any better, Parimala quit working in order to take her to a good hospital in Chennai. Blood tests revealed that Jayashree had low platelet count, and though she was suspected to have dengue, more tests confirmed that she had acute promyelocytic leukemia, a type of blood cancer in which there is excess build-up of immature blood-forming cells in the blood and bone marrow. When she was told about it, Parimala could not speak for a few minutes afterward. She felt a certain heaviness form in her chest that has not gone away till this day.

“My beautiful daughter who has never spoken ill of anyone – even her father who abandoned us – does not deserve this fate. She had so many dreams; she wanted to top her class this year and make me proud. She was my pillar of strength – now cancer has made her bedridden and threatens to take her away from me. Sometimes when I see her crying and asking the nurses to not hurt her with injections, I run to the lobby area and cry. I cannot bear to see my child suffering for no fault of hers.”-Parimala.

Parimala was able to start Jayshree’s treatment by borrowing money, but she cannot afford to continue it

Parimala worked very hard, scrubbing pots and pans and cleaning other people’s homes from morning till evening to provide for her children. She does not have anybody to call family except her aged mother who is now taking care of her 8-month-old baby. Her father passed away a few years back. She does not even have distant relatives to help her during this difficult period. She had to borrow money at high interest to get her daughter started on chemotherapy but has now completely run out of funds. But now Parimala is also not able to go to work as her daughter cannot stay away from her even for a minute now.

“She starts screaming if I move away from her side even for a minute. Low blood pressure and vomiting are her constant companions now. She asks me to bring her textbooks and notes sometimes, and she just touches them. She is too tired to even read one page. All she wanted to do was be a good student, but cancer has made her bedridden and fearful now. I had borrowed almost 2 lakhs, but that is not even close to being enough. I need to save her – please help me.”-Parimala.

13-year-old Jayashree, who was her mother’s only hope for a better future, is languishing in pain because of blood cancer. She needs prolonged chemotherapy to survive, but her mother (who has been struggling since her husband abandoned them) cannot afford to continue her treatment. Jayashree fears death more than anything now – her mother also lives in constant worry knowing that this may be a possibility if she does not get help urgently.

Your kind contribution can help this single mother save her daughter

UPI: rzpy.givetomlpjayashre003@hdfcbank (Copy to clipboard)
Or
Click here to read the instructions before you make a bank transfer. 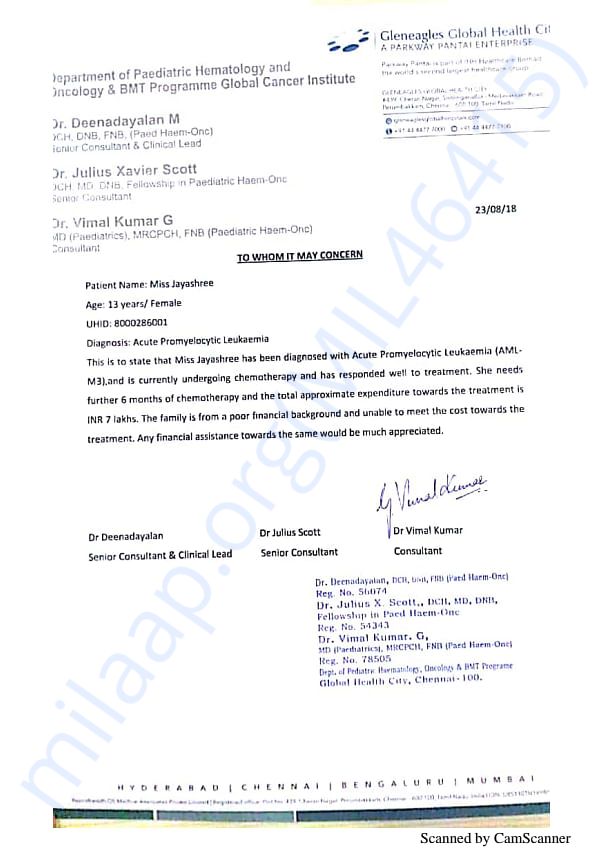 UPI: rzpy.givetomlpjayashre003@hdfcbank (Copy to clipboard)
Or
Click here to read the instructions before you make a bank transfer.

Jayashree is doing well. She is currently on maintenance chemotherapy and is expected to complete her treatment in Dec 2020.

Here is a quick update on Jayashree. Jayashree is currently on maintenance chemotherapy as an outpatient, and is responding well to her treatment. She needs to continue current medications for another one year for complete recovery. Please continue to pray for her.

Thank you all for your support. Jayashree is undergoing chemotherapy on regular basis. She visits the hospital every week or sometimes every two weeks for the treatment.

The doctors have informed us that Jayashree is showing signs of improvement. We will keep you all posted on Jayashree's progress.

We request your continuous support and prayers for her speedy recovery. 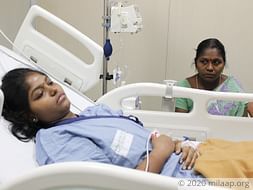