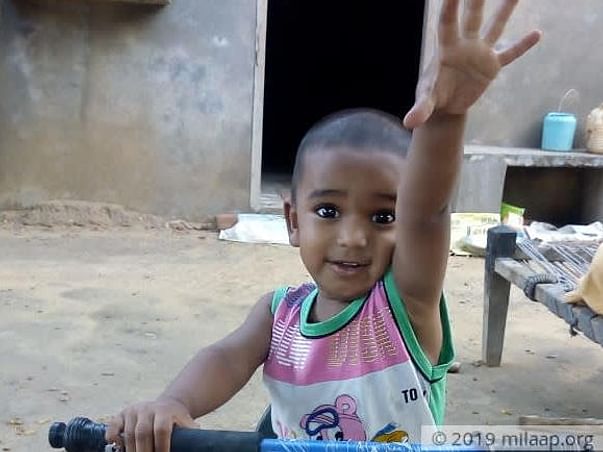 Share
It is the shrill laughter and non-stop chatter of their 2-year-old son, Jatin, which first welcomes Bihender and Ritu’s guests into their house. He then runs to meet them, saying a casual ‘Namaste’, without any inhibition. “I like riding my tricycle, what do you like doing?” he asks with a twinkle in his eye. And before one can answer, he runs away to play with the kids in his neighborhood. There is no house, no field, and no playground within the 10-feet radius of his home that his little feet have not trodden. Everybody who meets Jatin is instantly taken by his innocence and friendly banter.

Given how he is full of energy all the time, it is hard to fathom that little Jatin is suffering from deadly blood cancer. However, no amount of weakness or drowsiness of heavy medicines have been able to dampen his spirit till now – “He is going on with life as usual – he is playing non-stop and hardly gets weak, but we can’t turn a blind eye to the fact that cancer is slowly killing him and that our financial condition does not allow us to treat him.” says his worried father Bihender.

“We have told our poor child that he has a fever that will go away soon, and he believes us”

From birth to until recently, the only diseases which Jatin suffered from are normal cold and fever. But 10 days back, Jatin’s face had turned a pale yellow color, which alarmed his parents. They were more worried when the doctors at the local medical centre in their hometown of Haryana told them that his blood levels had dipped to dangerous levels. Their son had also unusually started complaining of leg pain. More tests at a good hospital in Gurgaon revealed the painful truth – Jatin was diagnosed with blood cancer. He needs prolonged chemotherapy to beat the deadly disease.


Jatin in the verandah of his 3-room home in Haryana

“Even when we took him to the doctors while he was feeling very weak and lightheaded, he was very playful and friendly with the doctors and nurses. He blindly believes us when we tell him he just has a small fever.The hospital environment did not seem to bother him even a bit. In fact, when the nurses gave him an injection, he laughed and said “I will get my toy gun and shoot you one day.” Everybody laughed at his naughtiness,”-Bihender

This father has been desperately begging for help to save his only son, but has been disappointed every time

Bihender works as a peon in a small private company in Haryana for a monthly salary of Rs 7,500. He lives with his only son, Jatin and wife, Ritu in a 3-room house, shared by his elder brother and family. In addition to pitching in for all household expenses, Bihender has the additional responsibility of taking care of his aged mother. Jatin’s diagnosis has come as a shock to everybody in his family. “Nobody believes us when we tell them that our child has fallen prey to a killer disease as he is so resilient and focuses only on the good things in life. It is with great difficulty that we were able to pay for his first round of chemo. Now I am begging everyone in the village to help him get better, but nothing has come so far,” laments Bihender.

Cancer has not brought about a remarkable change in little Jatin’s life, excepting making his voice more hoarse. He is active and playful, like he’s always been and is not very scared of injections or the hospital environment like most children. But the truth is that his cancer is deadly and can even kill him without proper treatment.

Your kind contribution will ensure that this child beats cancer