Covid-19 crisis continues to impact life as we know it. The crisis has brought forth inefficiencies of the system especially in health care, food and social security infrastructures. Reports of patients being denied admission in hospitals, abysmal conditions of quarantine centers, strikes by essential workers demanding better working conditions and wages, millions of migrant workers walking thousands of kilometres to their homes, civil society stepping into the blindspots left by the state are testimonies to the crisis.
While millions cope with hardships, an important question to ask at this juncture is: who is responsible for the hardships due to this crisis? Who can the people hold accountable? Who do we seek answers from?
It would be safe to say that had our elected representatives & the government(s) fulfilled their promises of development, the newly built health facilities and other infrastructure would have certainly contributed to tackle Covid-19 crisis.
Did you know that a sitting Member of Parliament from Mumbai promised a “super-speciality hospital” during the 2014 Lok Sabha Election? The same MP promised “a tertiary hospital in the constituency” during the 2019 Lok Sabha Election?

Six years to the super-speciality hospital, and a year to the tertiary hospital, yet we do not know the status of these promises. Election after election MPs, MLAs and Corporators and their respective political parties make hundreds of promises without facing public scrutiny to their performance.

Should it not be the duty (perhaps a legal compulsion?) of elected representatives to declare their performance against the promises they make?

It would be safe to say that had the above promises been fulfilled, the newly built health facilities and other infrastructure would have certainly contributed to tackle Covid-19 crisis.

The impunity enjoyed by elected representatives allows them to evade attempts to hold them accountable to their promises. However, if citizens along with the media and civil society collectively turn their gaze to events directly impacting their lives, our elected representatives will feel the scrutinising gaze of those who voted them to power.

As of August 2020, MPs have already completed a year of their term. We as citizens, must ask them what they have done in one year to fulfil their promises. We, the Informed Voter Project, propose to release the following reports to hold MPs accountable to the promises they made: 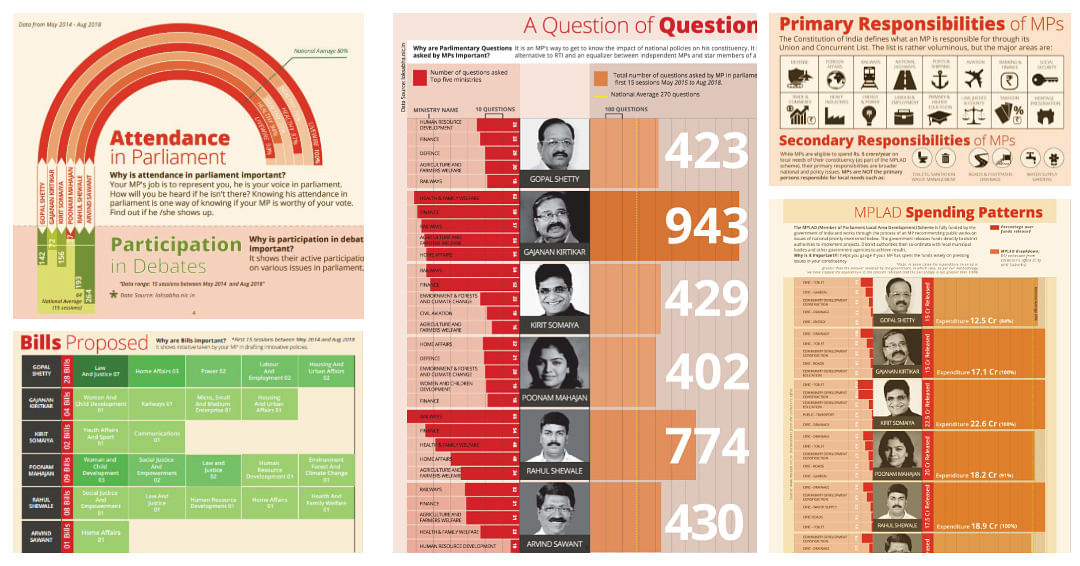 These report cards will track down every single promise, request, demand and claim made by the MPs  and demand from them a status update. The report will also look at their legislative performance: attendance, questions asked, debates, bills, MPLADS (Member of Parliament Local Area Development Scheme; ₹5 Crore/year)
We will also establish and orchestrate forums where voters ask specific questions (as opposed to general expressions of resentment or praise) to their elected representatives and therefore assert their voice and power as an informed citizenry that is part of a mature democracy. Therefore, we propose to invite MPs to a public forum where they can present their performance under public scrutiny.

The raison d'etre behind our work is to promote ethics in public life: if you have promised, it's your ethical and constitutional duty as representatives of people to deliver on the promises, and also to push for accountability & transparency of those holding political powers.

We seek your help in order to achieve the above mentioned goals. Your contribution can ensure an open-access report available to all, a collective voice for citizens and a reinforcement of public scrutiny on elected representatives demanding not just answers but also deliverables contributing to collective welfare.
Since 2009, we have documented thousands of politicians for Lok Sabha, Vidhan Sabha & Municipal Corporation elections, tracking their performance as MPs, MLAs & Corporators in the form of performance reports. This will be our 5th MP Performance Report Card: we've made these available for free to citizens and public media in 2011, 2014, 2015, and 2019. Check this Mumbai MP 2014-19 Performance Report for reference.
Your contribution will make the political system better by making it transparent in its actions and accountable to the people.
Fiercely independent scrutiny of those in power cannot happen by taking their money. 2009 to now. Small donations from you is all we have taken, it's all we need.