Abandoned By Husband, This Mother Of Two Needs Help To Fight Cancer | Milaap
This campaign has stopped and can no longer accept donations.

Abandoned By Husband, This Mother Of Two Needs Help To Fight Cancer 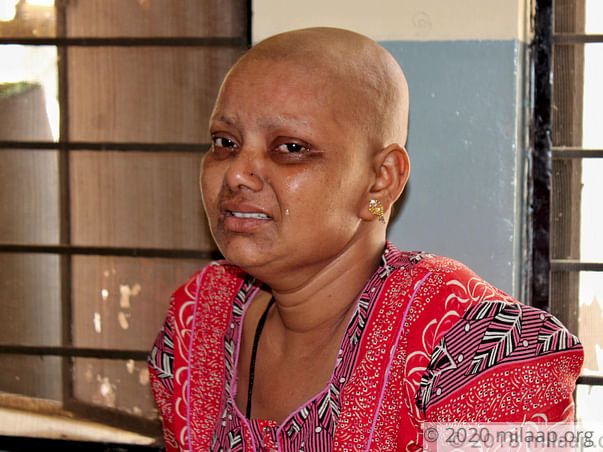 When Hoovibai was diagnosed with cancer for the first time last year, all she worried about was her two daughters – Gauthami (5) and Manasi (4). Her daughters are her world, and Hoovibai knew she had to fight the dreadful disease for them, especially since their father resented them for being girls, and was hardly ever around to take care of them. In the darkest moments of her life, Hoovibai’s alcoholic husband left her to fend for herself, refusing to take responsibility for his sick wife. “He said he didn’t want to spend the rest of his life taking care of her in the hospital. I told her then that I will do everything I can to save her,” says Thavaribai, Hoovibai’s mother and her biggest support. Unfortunately, just when they thought she was getting better, they found out that cancer has now spread to her brain.

Hoovibai never shows her pain and suffering to her daughters, she’s determined to survive for them

Hoovibai (27) was first diagnosed with fast-growing cancer in her uterus. She underwent chemotherapy, but in August this year, she was told that she has brain metastases, a dangerous condition in which the cancer cells have spread to the brain. Hoovibai has been in severe pain for over a year now, but she never shows it in front of her two daughters.

“She has lost all her hair. Her body aches all the time and there are days when she struggles to even sit up. She cries so much, asking me what she and her children have done to deserve this. But when her daughters come to visit her in the hospital, she ties a scarf over her head and spends her time with them smiling and talking. They ask her when she’s coming home with them, and she says that she will be with them soon. She’s fought so hard till now just for them, and they long to be with her. But her fight isn't over.” – Thavaribai, mother

Hoovibai now needs radiation therapy to beat cancer. Without urgent treatment, Hoovibai can lose movement in her limbs, her vision and worse, her life. However, her mother and younger brother are struggling to save her.

With no financial support from her husband, Hoovibai is struggling to get the treatment she needs

Hoovibai’s younger brother, Shivakumar, and her mother have been helping her with the treatment so far. They’ve sold the little jewellery that they owned and used their savings to afford her chemotherapy. However, they’re now 3 lakhs in debt and don’t have the means to afford the treatment she now needs. Hoovibai has no support from her husband. All she wants is to fight the disease and go back to her little girls. Hoovibai needs your support to fight cancer.

Hoovibai, a young mother of two, has been struggling with the pain of cancer for a year now. Just when they thought she was getting better, her cancer spread to her brain and now she needs urgent treatment to survive and go back to her daughters who long to be with her. With no support from her husband, Hoovibai is struggling. 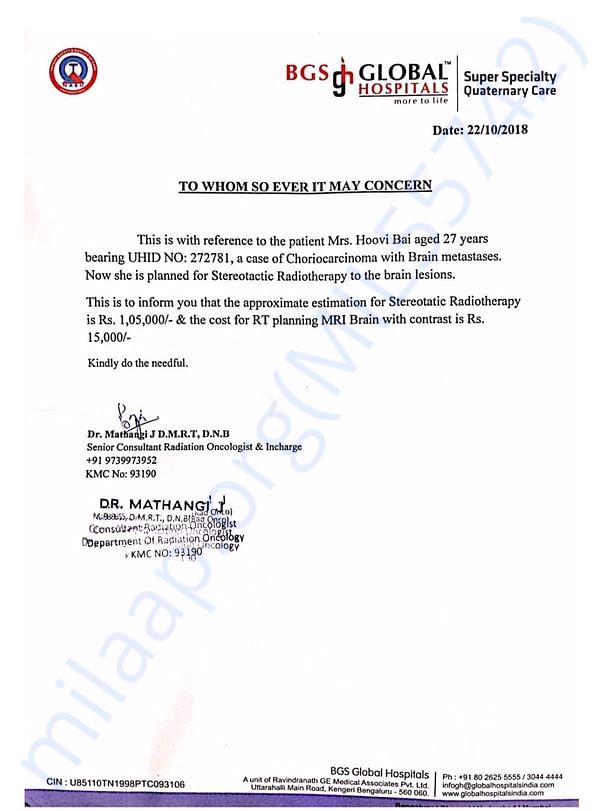 Hoovibai  is doing very well now. The brain mets(tumor) are partially regressed now. The advanced Radiotherapy treatment at BGS Hospital will mostly cure the remaining part of tumor. Our team is happy with her progress & response to chemotherapy.

Scan & donate with any app
check_circle_outline Download payment receipt
Report fundraiser
See how thousands are crowdfunding for their causes on Milaap
Rs.169,551 raised

I pray to god to recover you from all pain and give you enough strength to fight with cancer.

I pray to god to recover you from all pain and give you enough strength to fight with cancer.

r
You are sending a message to
rathodps2003
Go back 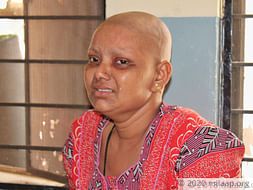 Abandoned By Husband, This Mother Of Two Needs Help To Fight Cancer