Without A Surgery In 5 Days, This Boy Will Be Completely Paralyzed | Milaap

Without A Surgery In 5 Days, This Boy Will Be Completely Paralyzed 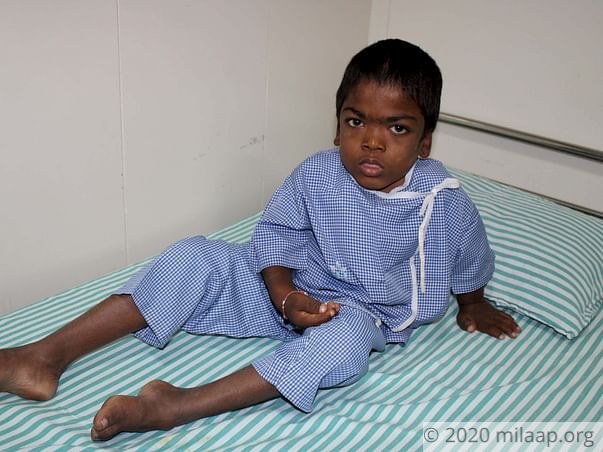 Little Hemanth never had a normal childhood. While other children his age spent most of their time in school, learning and playing, Hemanth was in the hospital every other day because of his rare and dangerous genetic disease. Despite many surgeries and treatment over the years, Hemanth’s condition is only getting worse. He needs his parents to support to even wear his t-shirt or go to the bathroom. If his parents can’t afford the surgery in the next 5 days, Hemanth will be completely paralyzed. But they have nothing left after spending 20 lakhs so far to keep him alive.

Little Hemanth’s health started deteriorating when he was just 9-months-old. He was diagnosed with inguinal hernia, a condition where a part of the intestine protrudes through a weak spot in the abdominal muscle causing extreme pain even when there's a slight movement. He underwent a surgery for it immediately. His parents, Veerachandra and Padmavathi, thought he got better and can have a normal life. However, they soon realised that Hemanth was not growing as he should. His forehead was unusually protruded and he hadn't started to try talking even when was 2. They took him to various doctors, but no doctor could find a name for his disease. After a few tests, he was diagnosed with mucopolysaccharidosis, a rare genetic disorder that stunts his physical and mental growth. The disease is extremely dangerous as it shortens the lifespan of the child.

Because of his genetic disorder, the posterior fossa, that is responsible for balance and coordinated movements, is compressed.  Hemanth needs to undergo a surgery to decompress the flattened posterior fossa otherwise he will lose movements in his hands and legs. It's only after this surgery that Hemanth can finally live a life free of illness. Hemanth's condition is growing worse with each passing day and his parents cannot provide him with the surgery due to lack of funds.

“I got worried when Hemanth’s hands and legs were growing thinner day after day. He would walk on his toes and some days he couldn’t walk at all. I thought my son’s life is getting better, but I was wrong.” - Padmavathi, mother

Hemanth’s father used to work as a Hindi teacher in a private school. But he had no choice but to leave his job to look after Hemanth. They have spent 20 lakhs so far for Hemanth’s treatment and various surgeries. And now after exhausting all the money they borrowed, they are struggling to provide the surgery that can save him from getting completely bedridden.


“I want to save my son anyhow but I have no money left. I have seen my son suffering so much because of this dangerous disease now I don’t want him to be disabled and suffer throughout his life.” - Veerachandra, father

Little Hemanth has 5 days to get a life-saving surgery, without which, he will lose movement in his hands and legs. His parents have spent everything they had on his surgeries so far and don't have the means to afford his treatment any longer. Hemanth needs your help to undergo a surgery that can save him from being paralysed.

Your contribution can save Hemanth 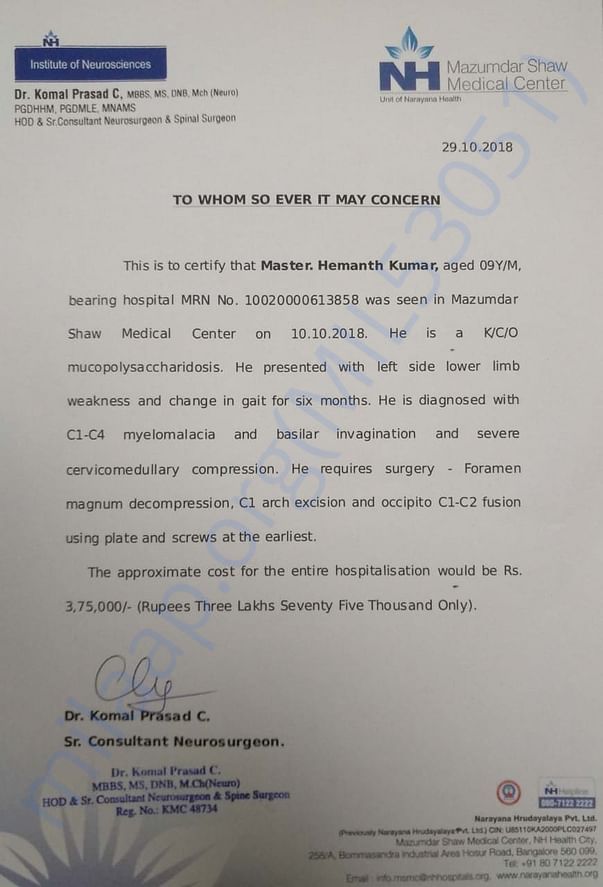 Hemanth is doing well and is at home. His surgery got postponed as he was facing some problem in breathing. Besides this, he is stable and is recovering. We shall keep you posted.

We are grateful for the love and support shown towards Hemanth.

His surgery has been scheduled to happen next month. The symptoms have been persistent and he is still in a lot of pain. We are hopeful the surgery will happen before his condition worsens.

We pray that you can continue to support him by sharing this campaign with your friends and family.

Report fundraiser
See how thousands are crowdfunding for their causes on Milaap
Rs.84,505 raised 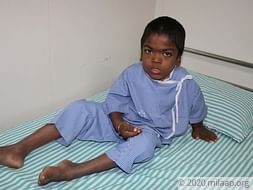 Without A Surgery In 5 Days, This Boy Will Be Completely Paralyzed