Help Reduce Snakebite Deaths And Disability In Rural India | Milaap
Milaap will not charge any fee on your donation to this campaign. 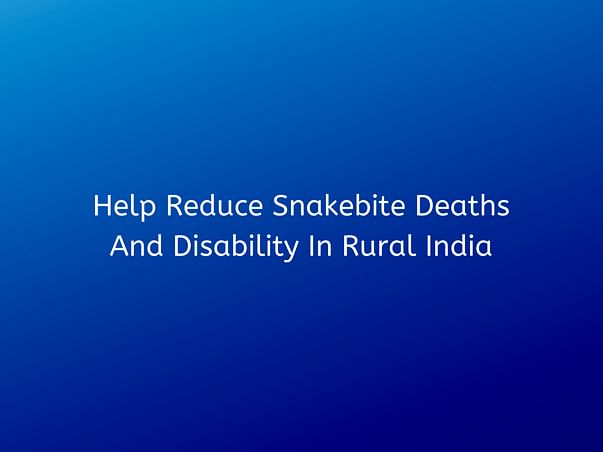 Every week, almost a thousand people in India die from venomous snakebites. Many more lose limbs, tissue or suffer some permanent loss of life function. With between forty and fifty thousand deaths due to snakebite every year, India accounts for nearly half the global number! The Gerry Martin Project works at the frontline of this conflict between humans and snakes, with the most vulnerable communities in India.

Based in Hunsur, Karnataka, we have been working for the past ten years to tackle the snakebite crisis. Our work includes educating at-risk communities about how to avoid being bitten and what to do in case of bites, providing support in the form of solar powered lanterns and gumboots to people working in fields and high risk areas, and researching the ecology of conflict to generate data and evidence to support our work as well as the work of governments and other organisations working on this issue.

We now need your support to buy equipment for a pioneering research study on the species of snake that is responsible for the majority of snakebite deaths, the Russell's viper.

Russell's viper bites are alarmingly common, and the death and physical damage endured by rural communities makes other medical crises pale in comparison. From July to September 2019, there have been three deaths just within an eight-kilometer radius of our field base! In addition to this, other bites have caused immense loss, suffering and expense to people who can barely afford it. One farmer has all but lost his foot and cannot work or even walk on it for a few months more. A lack of national data makes it hard to quantify exactly how many deaths can be attributed to the species. But, there is a general consensus that Russell’s vipers account for more death and disability than any other snake in the country.

Unfortunately, there is an absolutely no information about this snake’s movements, behaviour, seasons and populations in India. There have been no studies conducted to understand what factors affect snake populations, why there is so much conflict, whether any practices or protocols can help mitigate this conflict and what it would take to simply reduce people and snakes coming across one another.

This pioneering project aims to fill this knowledge gap, and understand the exact dynamics of conflict between humans and snakes. We do this by capturing snakes in conflict situations, bringing them in and, with the permission of the Forest Department, surgically implant radio transmitters into these snakes before releasing them in the exact same location that we found them at. We track them every day, noting their movements, behavior, breeding cycles, etc. Simultaneously, we inform farmers of the presence of these snakes and speak with them at length about avoiding these and other snakes. The information we gather will enable governments and organisations to design better interventions to protect people from snakebite deaths in rural India.

Our project began in October, 2018 with twenty snakes, and in order to collect more and better data we want to expand the sample size to sixty.  While we have self-funded all the logistics, operating costs, personnel and the initial equipment, we now need more transmitters, another receiver and an antenna to track the additional snakes.

Fully-equipped, we will be able to study this species in detail, understand its movements, preferences and seasonal behaviour. In our current fieldwork we educate people about the problem and convince entire communities to change some of their practices like walking barefoot without a torch at night. The findings from this research will allow us to design and implement more effective interventions with clear, practical steps that people and authorities need to take to mitigate snakebites.

The danger and damage posed by venomous snakebite is very real in rural, agricultural India. Nearly fifty thousand people die each year from this neglected tropical disease. This project will be path-breaking in the battle to cut down snakebite related death and disability in the most economically and socially vulnerable communities in India.

GM
You are sending a message to
Gerard Martin
Go back 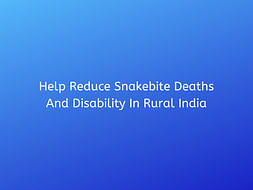