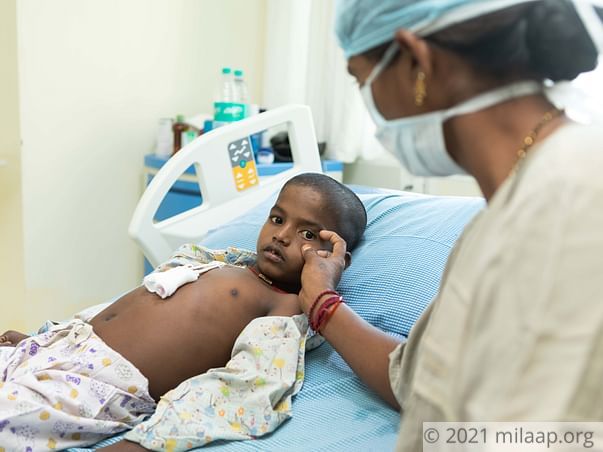 Share
Mohan has been constantly struggling to provide his children with a better life, but only tragedy has befallen them till now. His elder daughter Narmada (15) got paralyzed from the chest down when she was 5 months old. His elder son died because of a hole in his heart and his younger son died after accidentally drowning into a tub of water. Now his son Narsimha’s life is also at risk. He’s growing weaker and weaker every day. Mohan wants to save him, but with the little income he earns, it will take decades for him to arrange Rs 17 lakhs for the transplant that Narsimha needs. He needs your help to save his son.

Narsimha stopped drinking milk and spent most of his night crying when he was 3 months old. His parents took him to the local doctor, they were told that he had a very low blood count. After a bone marrow test, he was diagnosed with Thalassemia and he has been surviving on blood transfusions ever since. Adding more pain to his suffering, Narsimha lost his speaking and hearing ability when he was just 2 years old.


“Despite his disability and the disease, he was always active and happy. He’s always been positive about everything. He would go to school and play with his friends just like every other kid. He would often feel weak and feverish but with timely transfusions he would get better.” - Sivamma, mother.


“When my daughter Narmada got paralysed, we were told that it was because my wife and I belong to the same extended family. I felt helpless back then. When we were told that Surendra (eldest son) had a hole in his heart, I felt helpless as I didn’t have funds to save him. Even now I feel helpless every time I look at Narsimha. He’s going through a lot of pain for no fault of his. I want to end his pain, but with no money left I don’t know how to.” - Mohan, father

Mohan is a farmer earning Rs 300 per day which is barely enough to look after his family.  He has borrowed Rs 3 lakhs just for his son’s blood transfusions. With huge debts to clear, Mohan is struggling each day to arrange money for the transplant.

“Narsimha knows that he can have a healthy life with a transplant. But it’s impossible for me to arrange that much amount in such a short period of time. He needs the transplant immediately. Please help me save my son.” - Mohan, father

Mohan has been living a life of guilt for not able to save his elder children, he needs to save Narasimha at any cost

Narsimha has only known pain since he was 3 months old. Mohan has spent more than what he earns just for his transfusions. Narsimha’s pain and suffering can only come to an end with a transplant but his father can’t afford.

“I feel guilty for not being able to save my two sons. Now, I feel helpless, I have a chance to save Narsimha but I don’t have any funds.” - Mohan, father.