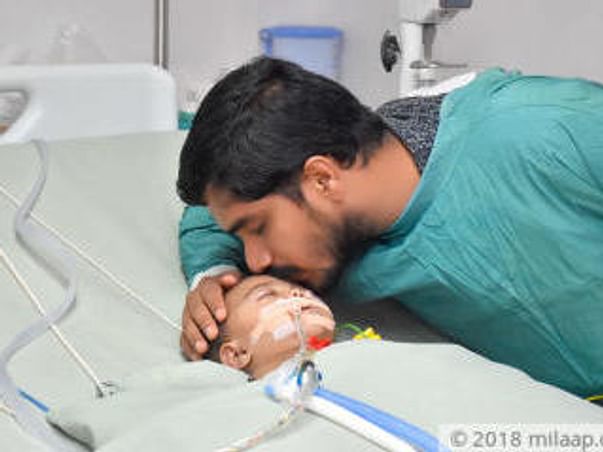 “Every time I see her lying motionless in the ICU, I cannot help but think about what a happy baby she was before she got so sick. Memories of her holding my hand and trying to stand up come rushing back to me. Her giggles ring in my ears and haunt me. I will not be able to forgive myself if something worse was to happen to her.”-Shafi, father of 7-month-old Fathima Hishfa.

Shafi used to work in the Gulf before his wife, Mubashira announced her pregnancy, just a year into their marriage. He made the decision to leave his job and come back home to Kerala (where his wife was)  to take care of his wife and newborn for a few months. He could not contain his joy when Baby Fathima was born and was a hands-on father; he was actively involved in taking care of her along with his wife. There was no dearth of happiness, but as time passed, they found that they were running out of money. Shafi was about to go back to the Gulf in order to find a new job when the unthinkable happened. His baby girl suddenly became very ill and is fighting for every breath in the ICU now. Without a job, Shafi is struggling to save his only child.

Fathima, when she was well and her life revolved only around toys and her favourite nursery rhymes

On the 10th of last month, Fathima had gone to sleep with her mother, Mubashira, after having milk and banana porridge as usual. When she woke up crying around 3 am, Mubashira thought nothing unusual of it as Fathima would always wake up in the middle of the night to nurse. But when she touched her baby, she knew something was wrong as her body was very warm. She gave her drops immediately and put her to sleep. The next morning, the fever only got worse and by afternoon she started having seizures.


“Our baby was shaking vigorously and her mouth was frothing. We rushed her to a hospital near our house in Tirur, Kerala. We kept thinking how a small fever had gotten worse all along the way, as our baby had never gotten so sick before – not even a small fever. Until then, she had only been going to the doctor for getting vaccinations done. She was growing up to be so active, I can't believe something like this has happened to her.”-Mubashira, mother.

The poor baby was diagnosed with brain inflammation and severe lung infection, has been on ventilator support

Baby Fathima was taken straight to the ventilator on admission to the hospital as she had trouble breathing along with the seizures. The doctors did an MRI scan, which suggested that she was suffering from viral meningoencephalitis, a deadly inflammation of the brain and spinal cord membranes, caused by a viral infection. Fathima spent 10 days in the hospital but had to move to a better hospital in Kozhikode when she developed severe lung infection (pneumonia) that needed advanced ventilation and medical management.


“Every day, I would ask the nurses the same question: ‘Has she opened her eyes today?’ And every time, they would give me the same answer: ‘No, not yet, have faith.’ Being a firm believer in God, I pray daily for Fathima to get better, as that’s all I can do as of now."-Shafi, with tears in his eyes.

Shafi had begged and borrowed to pay for his baby’s treatment till now, has nothing left

Shafi used to earn less than Rs 20,000 a month and had decent savings before he came back to Kerala for the sake of his family. But he had to spend all the money he’d saved up toiling in the Gulf on his wife’s delivery. So when Baby Fathima was taken to the hospital, he did not even have money for the admission fees. He had to immediately call up his friends and neighbours, who helped him at that point due to the emergency of the situation. But over time, Shafi found himself spending all the money he borrowed on medicines and other expenses at the hospital. Baby Fathima needs prolonged treatment, including antibiotics and ventilation, to survive but Shafi cannot afford it.

Baby Fathima is suffering from severe respiratory trouble and cannot breathe on her own. Earlier, she had battled deadly brain inflammation which had taken a toll on her tiny body. She needs 2 more weeks of intensive hospital care to survive, but her jobless father cannot afford it.

Your kind contribution can help this father save his baby girl