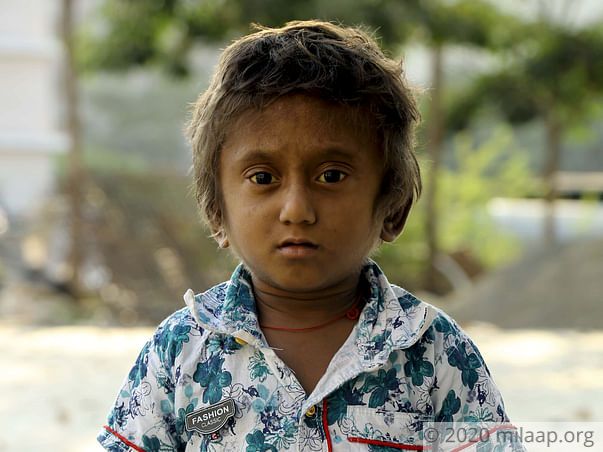 Every time Venkatalaxmi tries to feed 6-year-old Dhanunjay some mashed rice, he just says 'Voddu amma! My stomach will get hurt.' For the past one year, he has stopped eating food and has only been surviving on ORS water. If he eats even a bit of rice or bread, he throws up immediately. Poor Venkatalaxmi feels helpless as she watches her son grow weaker because his failing liver doesn't allow him to eat proper food due to poor digestion. Dhanunjay's condition is worsening and he has only one option - a liver transplant.

Dhanunjay never had a childhood free of illness

25 days after his birth, Dhanunjay’s skin and eyes started turning yellow. He was diagnosed with jaundice when consulted the local doctor in Vijayanagaram, Andhra Pradesh. He was given medication. For a week or two he would be fine and then the jaundice would recur. The poor parents weren’t able to understand what was happening to their son.


Dhanunjay is always weak and tired. He doesn't even have the strength to stand or walk even for a while

For the past 5 years, Dhanunjay was getting treated for his recurring jaundice while actually his liver was slowly deteriorating. His parents were unaware of it until his stomach started swelling up. He also started itching his skin until it bled. That's when they were told that Dhanunjay has chronic cholestatic liver disease, a condition that decreases bile secretion from the liver to the intestine, damaging the liver tissues.

He has never been to school

Because of recurring jaundice, Dhanunjay was always confined to his home. He never even went to school - he does not know what to say when he hears his neighbors talk about books and rhymes. Each day he’s just losing his strength. While all his cousins happily play hide and seek in front of him, Dhanunjay would just sit in a corner and watch them. He’s weak, tired and has only known pain all this while. He can only get better with a liver transplant. Ramakrishna is willing to donate a part of his liver to save Dhanunjay but he can’t afford the transplant.

“Dhanunjay is going through a lot of suffering. He doesn’t sleep at night. He passes watery stools every two hours. He needs to be taken to the hospital every week to remove fluids from his swollen stomach. I can't bear to see him suffering like this.” - Venkatalaxmi, mother

‘How do I feed my family of four while also paying thousands every month as treatment costs?’

Suryanarayana works as a security guard and earns Rs 7000 per month. With this, he has to look after his family of his four including his younger son Jayavardana Sai (1), while also managing Dhanunjay's expenses. Sometimes, he is able to only enough food for his children - he and his wife choose to go to bed hungry then. Suryanarayana wants to end Dhanunjay’s suffering but without funds, he is completely helpless.

“My relatives have been generously supporting all this while for Dhanunjay’s treatment. They have helped me with Rs 6 lakhs. Now even they are in no position to support me. It is impossible for me to arrange Rs 20 lakhs with the little income I earn.” - Suryanarayana, father

Without your help, Dhanunjay will never have a healthy life

The suffering that Dhanunjay is going through at such a tender age cannot be described in words. No one would ever want to go through that pain. Dhanunjay can live a better life with a liver transplant. His father cannot afford it with the little income he earns. They are in need of financial support.

Dhanunjay needs your contribution to undergoa liver transplant.
THE ABOVE CASE IS SUPPORTED UNDER AFFORDABLE LIVER TRANSPLANT INITIATIVE:

UPI: rzpy.givetomlpbadukond001@hdfcbank (Copy to clipboard)
Or
Click here to read the instructions before you make a bank transfer. 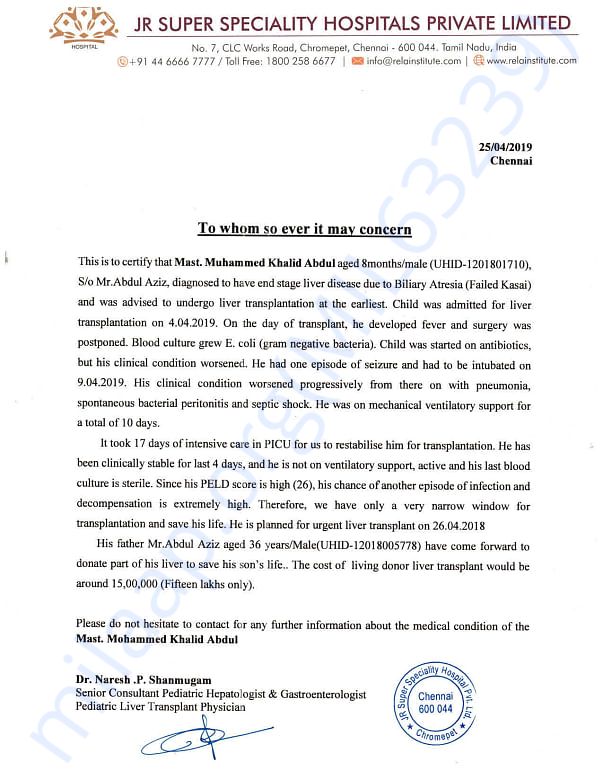 UPI: rzpy.givetomlpbadukond001@hdfcbank (Copy to clipboard)
Or
Click here to read the instructions before you make a bank transfer.

Thank you all for the support! Dhananjay got discharged and is doing well.

I would like to inform you that Dhananjay's liver transplant has been successfully done about 4 months ago. He has been on regular medicines since. We have been following up with the hospital once a month.

We thank you all personally for your constant support and contributions and for giving Dhananjay a chance to get back on his feet.

Report fundraiser
See how thousands are crowdfunding for their causes on Milaap
Rs.208,687 raised 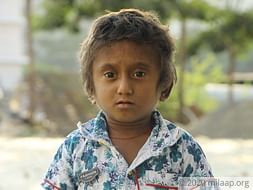