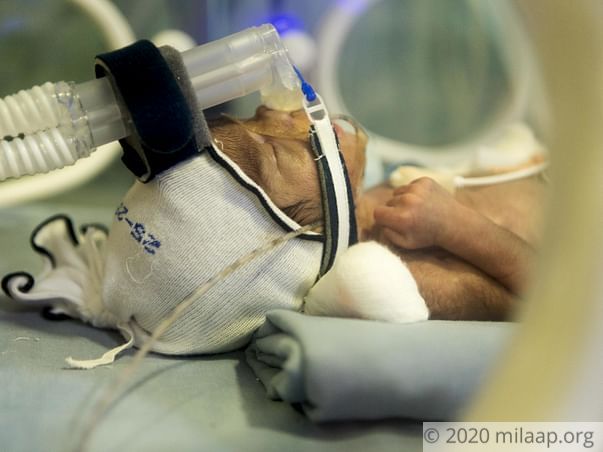 “I kept hoping that I would be all right but then the bleeding started. Soon the baby was born. It has been four days and I have still not seen him or held him.” - Rupika, the baby's mother

Rupika gave birth to a baby boy on May 21 through a caesarean delivery. Unable to move, she has not yet seen her 2-months-premature baby. The baby is in an incubator – and needs breathing support. He is severely underweight and has developed jaundice. His parents Rupika and Raju, who have not even held him, are doing everything they can to save their only child.

Even now, Rupika looks back and feels that her pregnancy was progressing well. She does not know why things got so bad this quickly. That morning, on May 21, she felt a wetness, her water had broken. She called her husband and the two immediately went to the doctor.

“The doctor put me under observation. She gave me injections and tablets. But I did not get better and started bleeding in an hour. He needed to be born to prevent him from catching infections. It was too soon, but I never expected that the early birth would be so dangerous for him.” - Rupika.

Rupika's child was born two full months before he was ready for the world outside his mother's womb. His lungs are underdeveloped. He is being kept in a special incubator that releases air into his lungs. Unfortunately, the baby has developed jaundice too. No one is allowed to touch him because the smallest infection can be deadly for him.


“I am allowed to visit him for one hour in the morning and one hour in the evening. My wife has not even seen him. He looks like he's being strong. He moves his hands and legs and sometimes he cries too. We are too scared to imagine finally being able to carry him.” - Raju, the baby's father.

Raju works in private company as a machine operator. He doesn't earn much, but he always thought he could live a life of dignity. Now, things have come to this, that without arranging for his baby's hospital stay, he will not be able to save him.

He has spent over Rs 1.5 lakhs for treatment till now and needs Rs 10 lakhs to complete the baby's treatment. No matter how much he tries, it will be impossible to arrange funds in time. With 6-8 more weeks of breathing support and medical attention, the baby will get better. Help these new parents deal with the crisis and take their baby home.

Your contribution will save Rupika and Raju's baby. 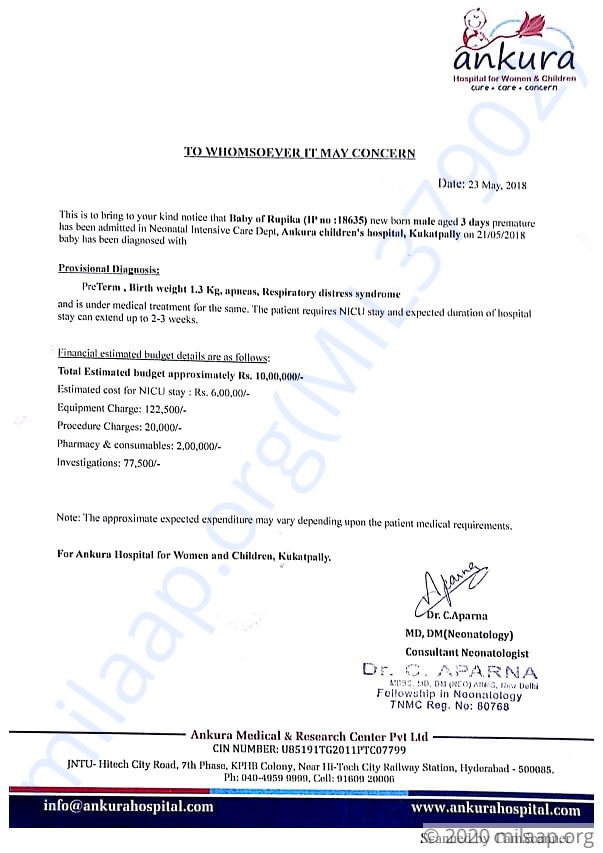 Ask for an update
Donated to this campaign via Paytm or bank transfer? Click here if you have not received an email confirmation from Milaap.
Dear Supporters ,

Baby has improved and is doing well too. She was discharged from the hospital.

Thank you so much for your support.

Scan & donate with any app
check_circle_outline Download payment receipt
Report fundraiser
See how thousands are crowdfunding for their causes on Milaap
Rs.36,395 raised

Get well soon. God bless you

I pray that you get well soon champ.

Get well soon. God bless you

I pray that you get well soon champ.

SV
You are sending a message to
Sunil Vidap
Go back 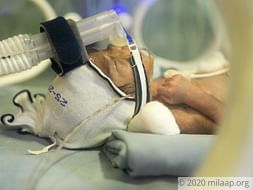