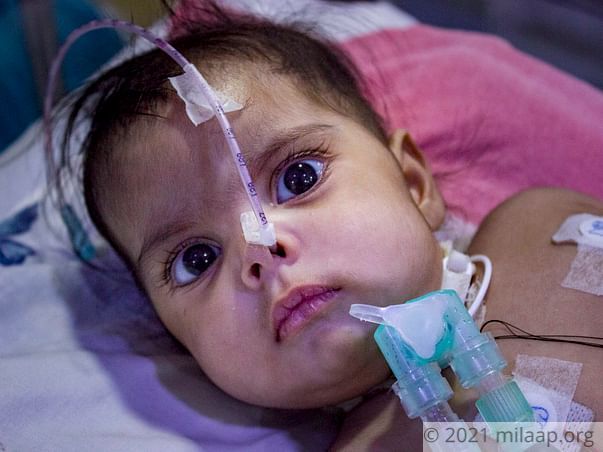 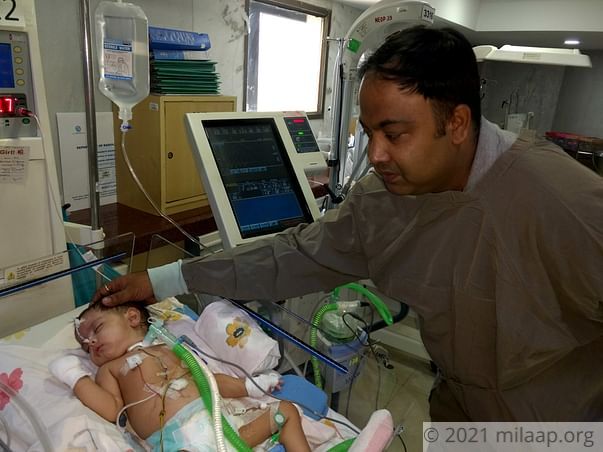 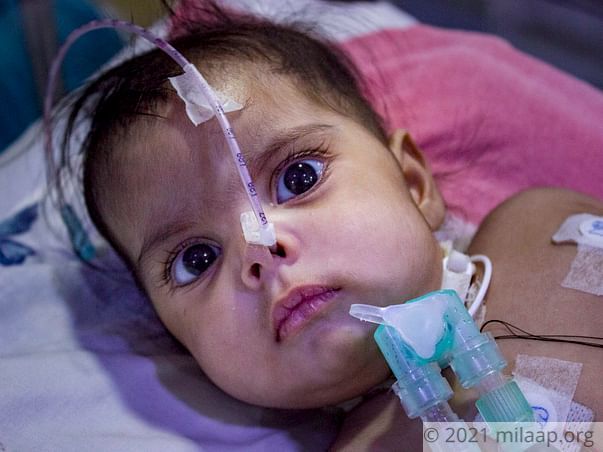 “She’s just 6 months old and she’s been on the ventilator twice already. Her lungs are compressed and every day, her breathing becomes lesser and lesser, but I know that we won’t give up without a fight. She is stronger than anyone I know.” – Manish, Ojaswi’s father

Ojaswi holding on to Manish's finger in the NICU

Unable to breathe or even swallow food, 6-month-old Ojaswi entered the world with a rare defect known as congenital diaphragmatic hernia. Simply put, this means that there is a hole in the baby’s diaphragm causing her lungs to get squished because of other organs.

“After birth, when we took her home, she wouldn’t breastfeed at all. She would find it so hard to breathe and when she was 2 months old she was already suffering from pneumonia. She had to be put on the ventilator. Seeing such a small baby already fighting for her life is something no parent should go through. It was devastating. Not only that, she also needed feeding tubes because that’s the only way she’d be fed.” – Manish

A hole in the baby’s diaphragm has put so much pressure on her lungs that they’re collapsing slowly every single day. The 6-month-old’s capacity to breathe by herself has dwindled down to a minimum.

“Right now, she’s suffering pneumonia again. She’s in the NICU on the ventilator again, and it’s worse than before. She won’t improve unless she’s fed so she needs feeding tubes too. Her diaphragm is also getting injured which is hurting her even more. My wife is so emotional. She can’t bear watching Ojaswi like this, it brings tears to her eyes every time. Only a mother can understand how she feels, it’s just so horrific.” - Manish

“I hope she has to undergo only one surgery. Right now, just her NICU charges are around Rs. 9000 a day and to stay alive, she needs to be there for over 30 days. Once she undergoes a surgery she'll need to stay there longer. On top of that there are the medicines and other charges that come along. All my savings are gone because we’ve just been in the hospital since February. We’ve even sold jewelry and borrowed as much as we could from our relatives. This is one of the hardest times for us but we will fight. I know that Ojaswi is a strong fighter and I have dreams of her joining the military because she is so strong.” – Manish

Manish has spent over Rs. 8 lakhs to keep the 6-month-old baby alive until now. Manish is a teacher in a small village and all his savings have disappeared. Every day he must pay over Rs. 10,000 just so that her daughter stays in the ICU, whereas he earns around Rs. 700 a day. There is no way he can afford such monumental costs, let alone the life-saving surgery Ojaswi needs in the near future. Manish is in dire need of Rs. 7.34 lakhs to save his girl and no matter how strong Ojaswi is, she won’t survive without your help.

Your support will save 6-month-old Ojaswi and ensure that she is able to breathe by herself again.

Thank you for the wonderful support that you have shown towards Baby of Rithu Jha. She is doing better now compared to earlier and she is off and on ventilator support in the hospital. The doctors suggest that she will take about 1 month for a complete recovery.

The baby was initially doing well but the health has now deteriorated and has been put on ventilator. The diaphragm of left lung is collapsing again and the hole in the heart has increased in size from 5 mm to 11 mm now.

The doctors are observing the baby closely for any irregularities. Also, they have advised a surgery in future, once the baby recovers and is able to breathe on its own.

We are all  hopeful about the recovery. Please keep supporting and praying. We shall keep you posted.

Scan & donate with any app
check_circle_outline Download payment receipt
Report fundraiser
Know someone in need of funds for a medical emergency? Refer to us
Rs.34,850 raised

Donated to this campaign via Bank transfer/QR Code? Click here if you can’t find your donation listed below.
D
Devashish donated Rs.100

May she recover soon 💕

Donated to this campaign via Bank transfer/QR Code? Click here if you can’t find your donation listed below.
D
Devashish donated Rs.100

May she recover soon 💕 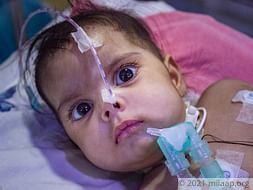