Unemployed For Almost A Month Now, Father Needs Help To Save His Baby | Milaap

Unemployed For Almost A Month Now, Father Needs Help To Save His Baby 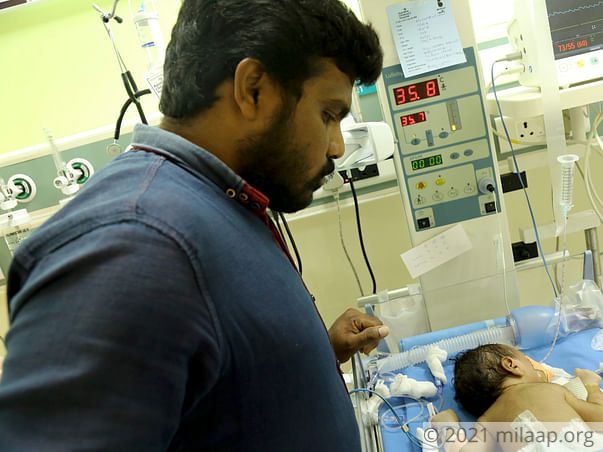 As Vishnu paces up and down the corridor outside the intensive care unit where his baby boy is admitted, memories of the day he was born come rushing to his mind. “Everything was going so well,” he reminisces, adding, “I can still remember my wife, Lakshmi’s smile as she was being wheeled into the delivery room. There was a calmness on her face when she told me that the next time we met, we would have our little prince or princess with us.” Suddenly Vishnu’s voice breaks. He chokes up saying, “I had been expecting good new all day, but what I received was the shock of my life when the doctors told me that my newborn is critically ill.”

That fateful day marked the beginning of a financially as well as emotionally exhausting struggle for this new father. With nobody to support him, he is alone in this battle, but all he wants is to take his baby back home healthy.

It was in the wee hours of 15th December that Lakshmi gave birth to their baby boy. As the doctors proceeded to give the baby in the arms of his mother, they noticed that he his face had started turning blue in colour. The baby also looked rather distressed, like he was suffocating. Doctors found that he was suffering from severe respiratory distress as a result of breathing meconium (first stools of an infant) and amniotic fluid (liquid that surrounds the foetus during pregnancy) into his lungs, at birth.

The baby had to be rushed to Chennai from the couple’s hometown of Nellore in an ambulance with ventilation support overnight, under the supervision of a doctor. He has been in intensive care since then, and though there is a remarkable improvement in his condition, he is still not out of danger. He still needs at least 3 more weeks in the NICU to be completely alright.

An old photo of Vishnu and Lakshmi

Lakshmi could not accompany her husband on the ambulance ride to Chennai as she was still recovering from the stressful delivery. To add to her troubles, within two days, she developed typhoid. “Even while my whole body was aching and I was shivering, my baby was all I could think about. I had hardly seen his face. I had not even touched him before he was taken away from me,” she laments. She is yet to meet the baby at the hospital as she is still reeling under the effects of the strong medicines that she had been taking for typhoid, but hopes that her husband is able to bring him home soon.

‘I sold the only piece of land I owned, but it is not enough to save my baby’

Vishnu used to work in a petrol bunk for a monthly salary of Rs 6,000. In addition to this, he would also farm crops on a half acre agricultural plot that his family owned. Apart from his wife, he was also responsible for taking care of his elderly father who is battling many health problems like diabetes and high blood pressure. “My income was not enough for his medicines itself. I’ve had to borrow on many occasions to keep the household running,” says Vishnu.

Lakshmi and Vishnu’s baby boy was born choking and gasping for air. It has been 20 days, but he still cannot breathe on his own without ventilator support. He needs your support to recover.

With your kind contribution, this father can save his baby boy 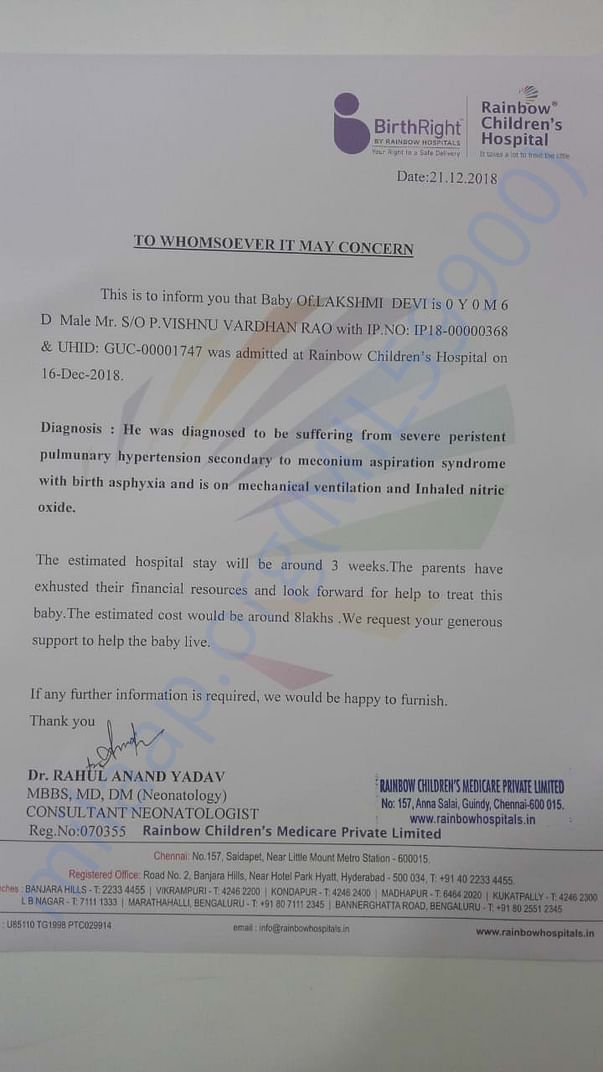 Ask for an update
Dear Fundraisers,

The baby doing well and will get discharged soon.  She is recovering and responding well to the treatment. We shall keep you posted.

Scan & donate with any app
check_circle_outline Download payment receipt
Report fundraiser
Know someone in need of funds for a medical emergency? Refer to us
Rs.178,508 raised 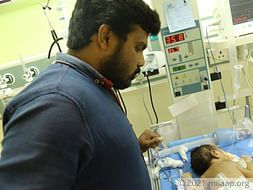 Unemployed For Almost A Month Now, Father Needs Help To Save His Baby