Unemployed For More Than A Month, Daily Wager Needs Help To Save Baby | Milaap

Unemployed For More Than A Month, Daily Wager Needs Help To Save Baby 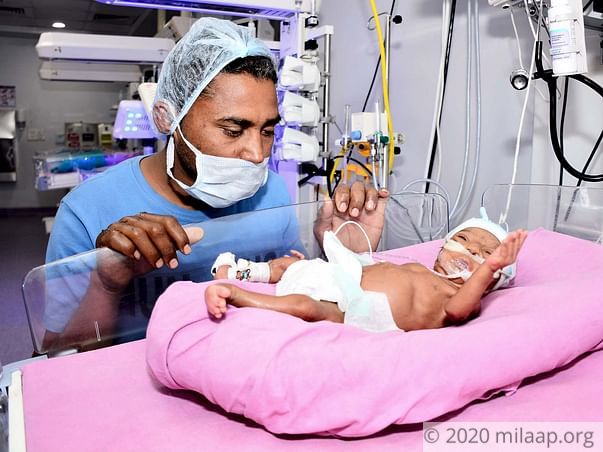 Every afternoon, Brijesh anxiously paces back and forth along the corridors outside the NICU unit. As soon as the clock strikes 1, he hurries inside to catch a glimpse of his premature baby boy who has been fighting to survive ever since he arrived in the world. “I cannot touch him as there is the risk of carrying infection from outdoors. But just seeing his beautiful face gives me joy,” says Brijesh who leaves the room after asking his wife, Asha, to kiss their baby on his behalf.

From the hospital, Brijesh goes straight to relatives and friends, begging them for help. “You know how hard it is for me without a job. My baby will die without treatment,” he pleads with them. Some people promise help, while some deny it outright. At the end of the day, all Brijesh is left with is empty pockets. But he does not despair; he remembers his baby’s innocent face and that stops him from giving up.

Brijesh and Asha at their house in Jaipur

Brijesh and his joint family – consisting of his aged parents, younger brother, three young children and wife, Asha were very happy and in a festive mood last Diwali. Being the only breadwinner of the family, Brijesh had to borrow money to get all his family members new clothes and sweets. Seeing their cheerful faces gave him the utmost joy. But there was also something else that was contributing to his happiness – he was going to become a father yet again. But sadly, the festival of lights ended on a dark note for this family when Asha started experiencing excruciating pain in her abdomen all of a sudden. She had to be rushed to the hospital, where she gave birth to her son at just 7 months of pregnancy.

“Everything happened so suddenly, like a bad dream. Asha had been smiling and giggling all evening – we didn’t expect her to fall sick like this. Thankfully, the doctors could save both the mother’s and baby’s life, but there is a long way to go before the baby fully recovers.”-Brijesh.

This poor baby is battling many complications, needs prolonged intensive care to survive

Brijesh and Asha’s baby boy weighed only a little more than a kilo at birth. He has been on ventilator support since the day he was born and is still not able to breathe on his own. In the beginning, he was not even able to drink his mother’s milk due to poor growth and had to be given a special formula. His immune system also was severely compromised, for which he received antibiotics. However, his health has improved in the past few days, and he has started drinking his mother’s milk through tubes. But the road to recovery is still very long – he needs a few more weeks of NICU stay to be completely alright.

“When they checked last day, he weighed almost 1.2 kg – my eyes were filled with happy tears then. I have been charting his progress since day one and have been praying continuously for his welfare. I just hope I don’t have to stop his treatment abruptly due to lack of money,”-Brijesh, tearfully.

Brijesh used to work as a daily wage labourer at a farm in Jaipur for monthly wages of Rs 9,000. But after Asha gave birth prematurely to their son, he had to quit his job and take care of his recovering wife and son at the hospital. “People who understood my plight gave me some money, and that is how I was able to pay off dues amounting to Rs 1.5 lakhs at the hospital. Thankfully, I was able to get my wife discharged, but my baby still needs intensive treatment to come back home with us. Without a job and rising expenses, I don’t know how much longer I will be able to manage,” says Brijesh. Things back home have been compromised due to this sudden tragedy – his aged parents and children are somehow managing on ration rice and lentils. His three girls long to see their little brother and ask Brijesh every day to at least show them a photo of him, but his mental state does not even let him do that.

Brijesh and Asha’s baby was born premature and is suffering from breathing problems as well as poor growth. If he gets intensive treatment for a few more days at the hospital, his parents will be able to take back a healthy baby brother for their elder daughters. But Brijesh, who is currently unemployed, is struggling to meet expenses.

UPI: rzpy.givetomlpbabyofas009@hdfcbank (Copy to clipboard)
Or
Click here to read the instructions before you make a bank transfer. 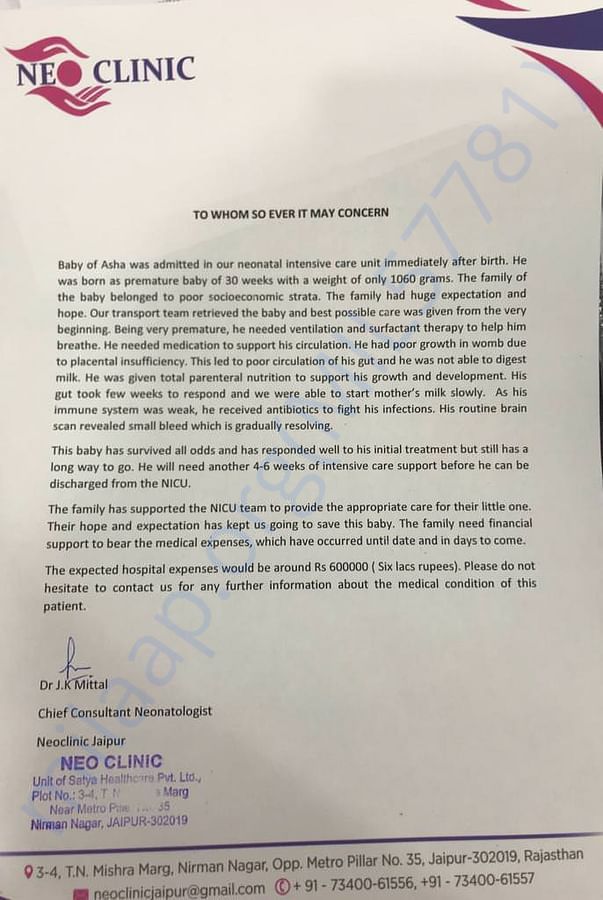 UPI: rzpy.givetomlpbabyofas009@hdfcbank (Copy to clipboard)
Or
Click here to read the instructions before you make a bank transfer.

I am thankful to all of you for the love and support given to my baby.

The baby is presently doing well and is visiting the hospital for regular check-ups.

We are very hopeful of a complete recovery soon. Please keep supporting the campaign.

Baby is doing well. Baby responded well to the treatment and is discharged from the hospital. Baby is stable and is recovering.

Report fundraiser
See how thousands are crowdfunding for their causes on Milaap
Rs.61,523 raised

n
You are sending a message to
neoclinicjaipur
Go back 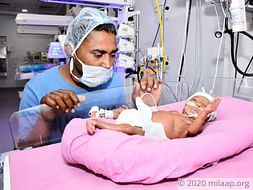 Unemployed For More Than A Month, Daily Wager Needs Help To Save Baby