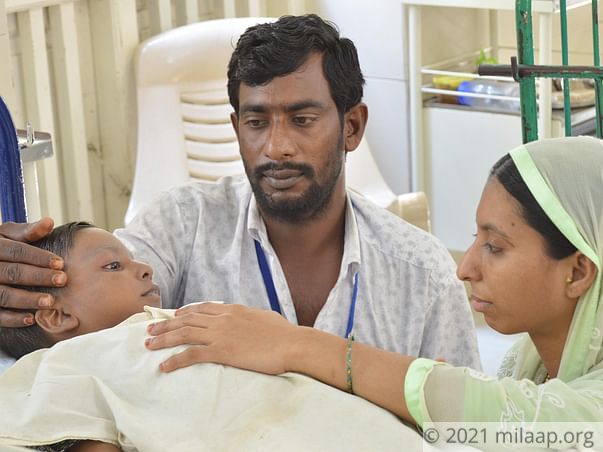 ‘Papa why do my friends always make fun of my hair colour? Can I please colour them black, then I will look like them?’ That’s the only thing that Ayam keeps on telling me. I kiss him back and tell him that he should not bother about all of this. I have no strength to tell him that his deadly disease can kill him and I'm unable to afford the life-saving transplant that he needs at the earliest." - Moti Pasha, father of 5-year-old Ayam.

The parents had never thought that the fever their son had could be an indicator of something as horrible as his current medical condition. In 2016, when Ayam’s fever was not subsiding at all, Moti and his wife, Heena got very scared.


Ayam, when he was hale and hearty

They took him to a doctor who instantly asked them to go for tests. The test results shook the parents to the core. It was the first time they got to know that their son has a rare medical condition called Hemophagocytic lymphohistiocytosis (HLH). It is a rare but potentially fatal condition in which certain white blood cells build up in and damage organs, including the bone marrow, liver and spleen, and destroy other blood cells. Little Ayam also has an inherited disorder called Griscelli Syndrome which is characterized by unusually light skin and light silvery-grey hair starting in infancy. This condition often leads to low blood platelet level, immunodeficiency and severe damage to vital organs.

Ayam watches his own brothers go to school and he pleads to his father that they send him as well. His parents have a hard time convincing little Ayam that his health would not permit him to go to school and do everything else that a child of his age usually does.

“Sometimes, he cries so much that we have to give in to his demands. We have bought him a school uniform like his brothers’. As my wife and I watch him put that on and sometimes accompany his brothers to the nearby school, we wish that he recovers soon and that he can go to school everyday.”

Little Ayam in his school dress

Since 2016, when Ayam was diagnosed with this disease, he has been getting regular blood transfusions, every month. Moti and Heena can’t afford to miss even one session of blood transfusion, or else little Ayam gets very weak and pale. The hospital is quite far from their place and the parents have a hard time convincing Ayam to go to the there.

“He is very scared of these hospital visits. Often we have to lie to him and tell him that we would be taking him to his aunt’s place. But by the time we are near the hospital he starts to cry uncontrollably and I feel so sorry for him. I wish I could do something for him but I am helpless. But Ayam is not getting any better despite the regular transfusions. Now the doctors are telling us that the only way he can fully recover is through a bone marrow transplant.”

Moti and Heena live with their children - Aman (8), Arshiya (6) and Ayam in Mudkhed in Nanded, Maharashtra. Moti has a garage of his own and is a bike mechanic. He makes around Rs 450-500 per month and struggles very hard to run his family. He has already spent a lot of money on his son’s treatment but he needs Rs 21 lakhs for the bone marrow transplant that can save his son’s life.

5-years-old Ayam is fighting a rare disease that can only be cured by a bone marrow transplant. His poor parents are unable to arrange for the money for the transplant without any help. Your generous contribution can give little Ayam a new life and help him get back to his normal life.

Your support can save Ayam's life