Farmer Who Makes Less Than Rs. 75/day Cannot Save Son From Cancer | Milaap

Farmer Who Makes Less Than Rs. 75/day Cannot Save Son From Cancer 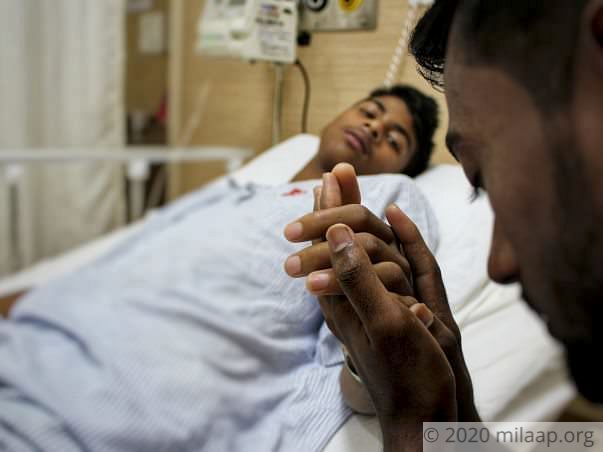 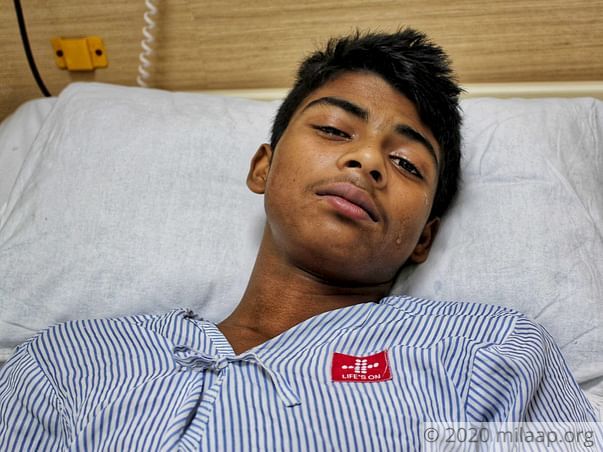 “He’s the only one who can save us from our misery. I want him to study and become successful in what he wants to do but now, if he loses his leg, he’s going to lose his will to live. He won’t even be able to do labor in the farms like us if that happens. I’m literally begging everyone I meet to help my son.” – Kamarul, Asik’s father

From being a highly active and bright child to being depressed by the fear of losing his leg and life, the 16-year-old Asik Ikbal is suffering from a crippling pain due to a deadly form of bone cancer far away from home. Not only does he need several cycles of chemotherapy but he also needs a surgery to treat his damaged bone. His father, a daily wage farmer, is desperately begging on everyone’s door so that he can try to save his son.


Kamarul and Asik at the hospital

Just over 2 months ago, Asik bruised his right leg while playing cricket. Despite medicines, the pain refused to subside and after a few tests, Asik’s family was horrified to learn that he was suffering from bone cancer.

“I can’t believe that the bone in his right leg has already been damaged in less than 2 months. When we were first told that his leg has to be cut off, we were terrified. My wife and I were crying every day because Asik has so much potential. Now, after getting him checked in Bangalore, there is hope of keeping his leg. I begged and got around Rs. 40,000 to start his first cycle of chemo but we are in constant fear of losing him to poverty,” – Kamarul

“Asik just passed his 10th exams and he was going to pursue higher studies. He wanted lift us out of misery and poverty so that we don’t have to work on farms for meager sums anymore. He’s extremely good at cricket too. He was the one who’d make others laugh a lot. Now, he’s just so depressed. He’s become very thin, doesn’t speak much and doesn’t even want to eat. He takes around 17-18 tablets a day! He’s so weak and I cry when I look at him because he feels like he’s dying.” – Kamarul

With the speed with which cancer has spread, it will become fatal soon if left untreated. To keep his leg and life, Asik has to undergo 4 cycles of chemo followed by a limb-saving bone surgery, followed by 4 more intense cycles of chemo. Hailing from a poverty-stricken home in rural West Bengal, Asik has to remain in Bangalore, where he’s being treated, for at least 8 to 10 months.

Kamarul is a very poor farmer who works on others’ farms and earns around Rs. 2000 every month which is less than Rs. 75 per day. There is no way he can pay for his weekly medicines, let alone the chemotherapy and limb-saving surgery.

“His injections cost around Rs. 550 every day and his medicines cost around Rs. 2000 every week. The doctors have said that Asik should not travel back home because he can catch infections during the 34-hour train journey. To rent a room in Bangalore, it’s around Rs. 10,000 per month. How am I supposed to afford this? We’re extremely poor and without help, what option does my son have besides dying?”

Until now, Kamarul has literally begged from door to door to gather Rs. 40,000 to get Asik’s chemotherapy started. With 7 more cycles of chemo and a surgery left, Kamarul is desperate to save his son’s life but he can’t even afford his medicines. He needs your help to save his son.

Your support will save 16-year-old Asik and ensure that he remains the symbol of hope for his poor family.

UPI: rzpy.givetomlpasikikba001@hdfcbank (Copy to clipboard)
Or
Click here to read the instructions before you make a bank transfer. 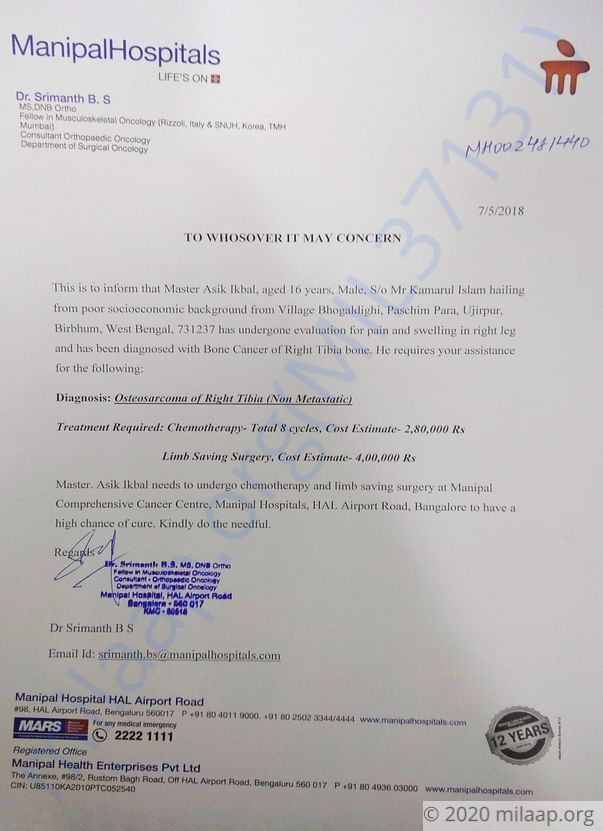 UPI: rzpy.givetomlpasikikba001@hdfcbank (Copy to clipboard)
Or
Click here to read the instructions before you make a bank transfer.

Here's a quick update on Asik. Asik is doing ok and is responding well to the treatment. He recently underwent a surgery and is stable now. Here is the picture of Asik post surgery.

Thank you once again. Keep praying for his speedy recovery.

I am grateful to all of you for the immense support and love.

Asik has presently completed 6 cycles of chemotherapy and will begin the 7th cycle by this week. He is doing better and there are no side effects post the therapy and surgery.

Please pray for his health and share the campaign. Thank you all!

Thank you for the support you have shown towards Asik. Here is a quick update on his health.

He has finished four cycles of chemotherapy and has successfully undergone the surgery. There are no major side effects due to chemotherapy, also there are no post-surgery complications as of now.

He still has to undergo four more cycles for which doctors will schedule the routine. Will keep you posted as his health progresses.

Thank you once again for the love and support.
Regards,
Kamarul
Load more
Donate

Report fundraiser
See how thousands are crowdfunding for their causes on Milaap
Rs.285,975 raised 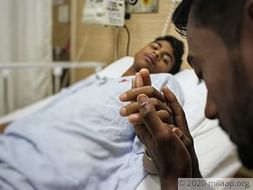 Farmer Who Makes Less Than Rs. 75/day Cannot Save Son From Cancer