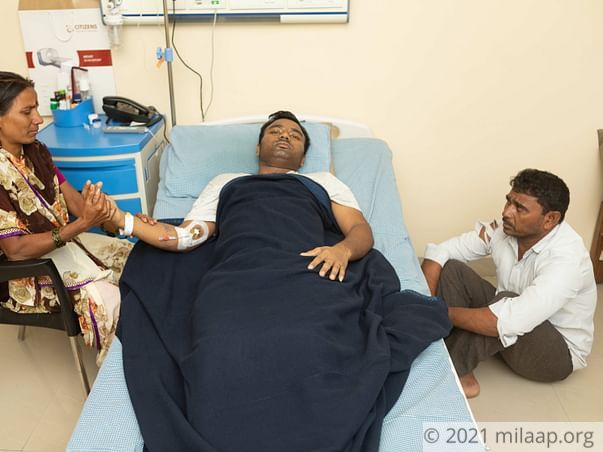 “My world came crashing down when my only son, whom I had pinned all my hopes on, was diagnosed with blood cancer. He would always tell me – ‘Baba, after I get a good job soon, you would not have to work under the hot sun in the fields again. I will take care of everything.’ Now, he barely talks as he thinks his end may be near. After leaving everything behind to get him treated in a different city, I am struggling. I don’t even have one rupee for his treatment, when I need lakhs for the same. My son is getting weaker and I am running out of money to save him.”-Dilip, father of 22-year-old Akash Yenwal.

It was with great difficulty that Dilip, a small farmer, and his wife Kantabai, a housewife, raised their only son Akash. Despite their perpetual financial constraints, they made sure that Akash always had good food to eat and decent clothes to wear. His education was their topmost priority – they didn’t want him to live a life of hardship like theirs. But fate had other plans. He was pursuing the second year of his 2-year teaching diploma course when he got a high-grade fever that simply refused to go away.

“The fever slowly began accompanied by painful headaches. He could not eat or sleep. He even stopped going to college. When we took him to the local doctors in our hometown in Maharashtra, they gave him medicines and assured us that he would be alright soon. But that did not happen. Over the next few days, we saw him losing interest in daily activities such as brushing his teeth or even waking up from bed. His mother was getting really worried about his welfare.”-Dilip.

Akash suffered high fever on and off for around 20 days. In this period, blood tests revealed that his platelet count was dipping dangerously. At first, doctors suspected that it was dengue, but when no medical intervention worked on that front, the family was advised to take Akash to a better hospital in Hyderabad.

“The hospital was miles away from home, but we were ready for anything to know what was wrong with our son. We had spent many days imagining the worst and wanted this ordeal to be over – once and for all. After a few tests at the hospital in Hyderabad, they gave us the devastating news that our son had cancer. We didn’t want to believe it at first – God had given us only one child and we had taken care of him so well. I don’t know what sins I did to deserve such a punishment. Only last day Akash got to know about his disease - he was crying the whole day; it was an unbearable sight.”-Kantabai, mother.

After relocating for his son’s treatment, it was very difficult for him to find a new job for Dilip in Hyderabad at first. For many days, he managed to buy food and medicines with money that he had borrowed from friends in his hometown. When the money got over, he starved himself but somehow made sure that his son was well-fed. Kind doctors at the hospital had started his chemotherapy, even when Dilip told them that money was a big problem.

“After much hardship, I was able to find a job as a labourer in Hyderabad. Now I go to work early in the morning and come back only at night. My wife is forced to take care of Akash when I am gone. She does not know a lot – this is the first time that she has stayed in a place outside Maharashtra. We have so many challenges, but we are ready to go through anything to save our son.”-Dilip.

Akash can be saved, but his father is running out of time and money to make it happen

Akash is becoming weaker and weaker with each passing day. His platelet count is at an all-time low, but doctors say he can be completely cured with the right treatment. His father, Dilip, cannot bear to see his son go through this pain and wants to save him at any cost. The only obstacle is money, that Dilip cannot arrange with his meagre salary of Rs 200 per day.

“I cannot even ask my relatives for help – they are poorer than we are. We have nobody to help us in this strange city. Akash tries to put up a brave face, but I know that he is suffering. He feels helpless seeing me struggle like this. I don’t know what to do; the money I make is hardly enough for medicines.”-Dilip.

Akash has a form of blood cancer that has high chances of getting cured completely, with prolonged chemotherapy and supportive care. He may need a bone marrow transplant only if chemotherapy fails to control his cancer. His father, Dilip, is struggling to make ends meet in a strange city, with nobody to help. He feels helpless that he won’t be able to save Akash on time. He needs help urgently, or he will lose his only son – his only hope for a better future.