5-Year-Old Hates Looking At Herself As Cancer Changed Her Drastically | Milaap
This campaign has stopped and can no longer accept donations. 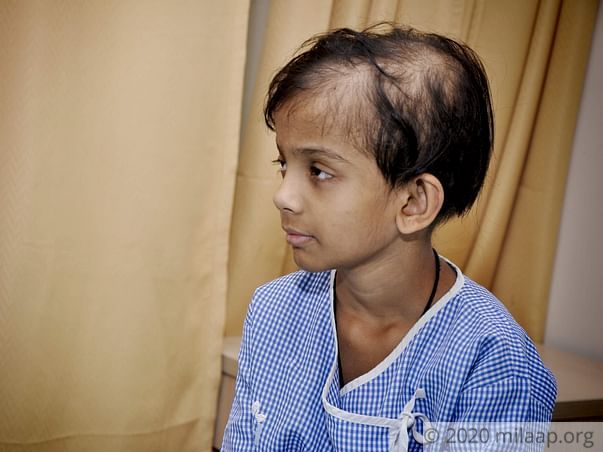 There was a time when little Afsheen would spend hours in front of the mirror, combing her shiny black hair and powdering her rosy cheeks, asking her mumma ‘How do I look?’ “She was once so proud of people calling her cute and complimenting her good looks. Little did we know she would fall prey to the evil eye and battle deadly cancer…that too at such a young age,” laments Mojamill, her father.

Now, Afsheen has lost most of her hair and has become weak and skinny. She spends her time swiping through her old photos and videos and crying saying ‘Why do I look like this?' and generally avoids looking at herself in the mirror. Her parents Mojamill and Shaira assure her that she would be back to her old self soon, but they do not have the resources to continue her cancer treatment.

Afsheen was a bubbly and energetic kid who spent all day playing with the kids in her neighborhood before she fell sick in June last year. All of a sudden, her laughter was replaced by whimpers, as she began vomiting 7-8 times in a day. Along with this, her parents noticed that there was something different about her left eye – it looked like it was shining abnormally.

“We took her to many doctors, but nobody could find out the reason for her vomiting episodes and nobody took her eye problem seriously either. Despite Ct scans after endoscopies after every test under the son, nothing was coming to light.  We were very worried as our child was eating less due to extreme weakness,” recalls Mojamill.

Finally, it was in December that she was diagnosed with eye cancer, and doctors think her vomiting episodes are related to a kidney infection that she may be suffering from. She was started on chemotherapy immediately and has completed 2 rounds so far.

There is a 50/50 chance that she might lose her eyesight, but her parents want to save her life

It was within a few days of getting Afsheen started on chemotherapy that doctors broke the sad news to her parents: her cancer is so advanced that it can cause partial or full loss of vision. Mojamill and Shaira were shocked but kept their cool as they wanted to stay strong for the sake of their child.


"Whatever the doctor told was too much to take, but all that we are worried about is saving her life. She has become a bag of bones, is able to ingest only liquid food. I have not seen her smile in months now and her voice has become so feeble now,” adds Mojamill.

This father can save his daughter with your help

Mojamill works in a computer and mobile repair shop in Bengaluru, and earns a modest income. He had been saving up for his two daughters – 9-year-old Mehreen and 5-year-old Afsheen’s future when bad times fell on the family, after Afsheen got diagnosed with cancer. He had to spend all his savings (almost Rs 2 lakhs) on Afsheen’s treatment till now. He’s also not been able to go to work regularly because of the regular hospital visits.


“Afsheen needs prolonged chemotherapy if she has to beat this deadly disease. We cannot stop her treatment abruptly due to lack of money – it can lead to dangerous consequences. Please help us,”-Mojamill 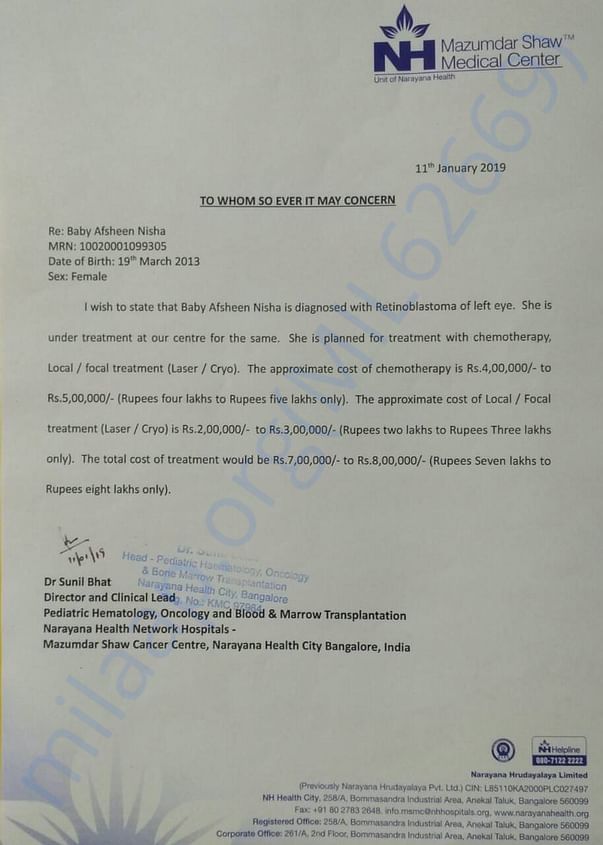 Afsheen's repeat MRI Brain and Spine was done on 02-11-2019 which was suggestive of metastasis. She had hypertension for which she was started on Anti-hypertensives. She continued to have altered sensorium in the form of decreased responsiveness. She was started on NG feeds in view of possibility of aspiration.

Parents were counselled about child’s condition and they wish to take the child to a different hospital in Bhubneshwar for treatment and wanted to get her discharged against medical advice. We will keep you all posted about the utilization of funds.

Afsheen is doing well. She was admitted under daycare for lumbar puncher.

Thank you for your support and contribution.

This is to inform you that Afsheen is doing well right now. The chemotherapy has been stopped. She is currently under medication and have to take PBC tests every 15 days.

Report fundraiser
See how thousands are crowdfunding for their causes on Milaap
Rs.847,237 raised 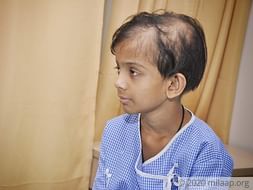