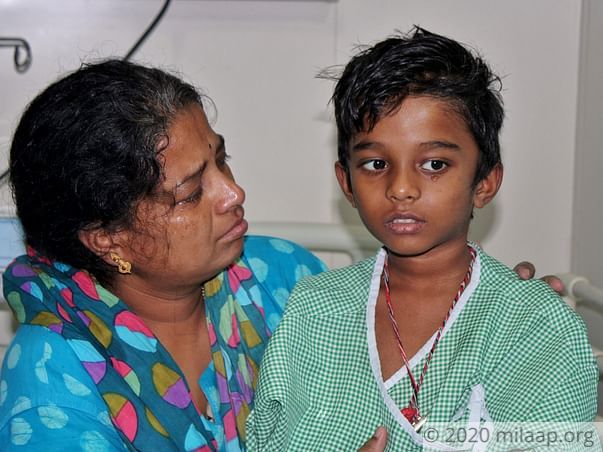 On his 6th birthday, Advik wasn’t excited. All his friends and family were around him, but he just wasn’t his active and happy self. His parents would usually have to beg him to sit down for two minutes before he was off on his next “adventure” as he liked to call it. But on this day, when everyone was celebrating, he sat on the chair all alone. That night on 10 December, Lakshmi noticed blood in his urine and blood clots on his legs.

On his 6th birthday, Advik fell terribly sick and was diagnosed with a severe blood disease.

On the weekends, Lakshmi would spend the day drawing and colouring with Advik. She teaches art to high school students in Hassan, Karnataka, but her son’s drawings are her favourite. Advik kept his parents, Lakshmi and Lakshmeesh, on their toes. There’s never a quiet moment in the house with him around.


“He never sits idle. He’s always engaged in some activity – whether it’s inside the house or playing cricket and hide and seek with the neighbourhood children. All his teachers in kindergarten always tell us that he participates in every activity with so much enthusiasm. He recently dressed up as a king for his fancy dress competition.” - Lakshmi, mother

But now in the hospital, Advik can’t do much. He’s too weak, and his disease makes him vulnerable to even small infections. Advik has aplastic anemia, a severe condition in which the body stops producing new blood cells. Lakshmi is diabetic, and the stress of watching her only son suffer so much is affecting her healthy. But nothing is above his health for her.


Advik dressed up for the fancy dress competition in school

There’s a permanent cure for his disease, but it’s beyond his parents’ means


“We need to make sure that he doesn’t get even a mild fever. Even that can be dangerous. My husband is back home because of work. He wants to be with us, but we need every rupee that we can get. We end up spending nearly 1 lakh every week. We’ve already taken many loans and spent almost 10 lakhs till now. We just can’t afford the transplant.” - Lakshmi

It’s the most difficult sight for a parent to see their child suffer so much. Lakshmi is diabetic. But she doesn’t worry much about herself. All she worries about is her only son, her ‘paapu’ (child) as she lovingly calls him. Advik has been undergoing blood transfusions for more than a month now, but it can only prolong his life for this long. He needs a bone marrow transplant at the earliest. Only your support can save him from this misery.

UPI: givetolakshmifundss@yesbankltd (Copy to clipboard)
Or
Click here to read the instructions before you make a bank transfer. 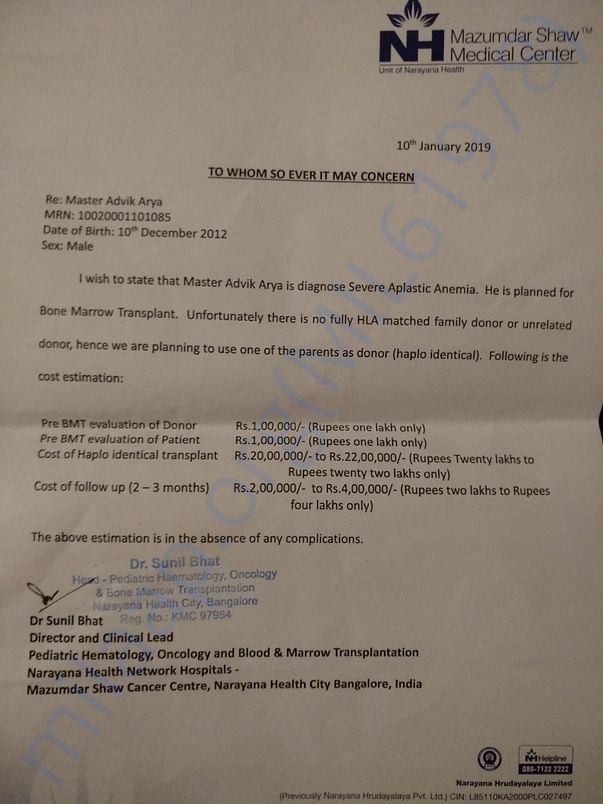 UPI: givetolakshmifundss@yesbankltd (Copy to clipboard)
Or
Click here to read the instructions before you make a bank transfer.

We have some unfortunate news to share with all of you. Advik is no more with us. He fought very hard but he could not make it.

All the funds raised have been used for his treatment.

Report fundraiser
See how thousands are crowdfunding for their causes on Milaap
Rs.80,722 raised

Donated to this campaign via Paytm? Click here if you can’t find your donation listed below.
AA
Abhinav donated Rs.1,500

May god bless the kid and he recovers soon.

Donated to this campaign via Paytm? Click here if you can’t find your donation listed below.
AA
Abhinav donated Rs.1,500

May god bless the kid and he recovers soon. 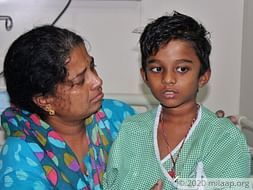