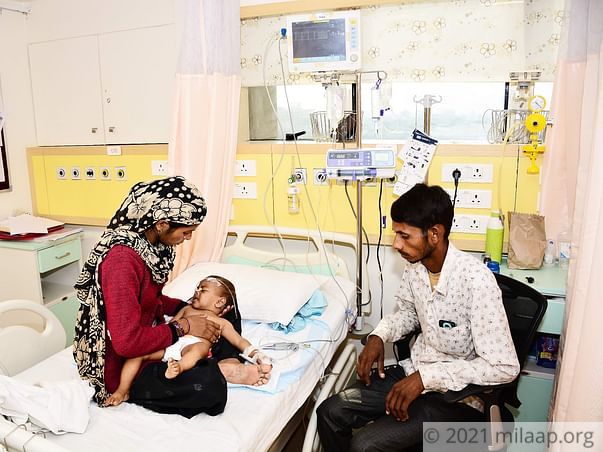 Share
Suleman is unable to concentrate on his work these days. There have been a number of times when his employer had caught him sitting alone and pondering. When someone calls his name, he looks up at them, startled. For the past few days, he has been very worried about his baby boy, Aahil. 6-month-old Aahil has been suffering from violent seizures and he needs to stay in the hospital. But Suleman is a poor daily wage labourer who is in no condition to afford the hospital stay.

The giggles of little Aahil used to fill up Suleman and Medina’s house. Their elder children adored the baby and together they had made so many plans for their little brother. Days were passing in fun and laughter, when suddenly little Aahil started running a very high temperature. The parents got all the more scared when he started vomiting and immediately took him to the hospital.

“But our misfortune seemed to have no end. We had to run from one hospital to another but the doctors could give us no hope. Finally, the third hospital we came to was where we could get him admitted.” - Suleman, father

It is not just the fever that is making 6-month-old Aahil weak. He is now having violent seizures as well. The doctors have diagnosed him with seizure disorder and the baby needs to continue staying in the hospital for some more time to recover fully.

“The sight is so painful - his entire body starts shivering and absolutely nothing that we do helps him. He is such a small baby, I don’t know why he is going through so much suffering?”

The little baby is in the ICU and needs to stay longer, but Suleman is unsure if he can afford it

Every time Suleman sees his baby boy suffer in so much pain, he gets anxious and desperate to do something for him. But just then he is reminded of his harsh reality - his meagre income would not be able to afford Aahil’s further stay in the hospital. Already, he has spent around Rs 60,000-70,000 after borrowing from near relatives. There is no way that he can arrange for Rs 2.5 lakhs that are needed for the hospital stay without any help.

6-month-old baby boy Aahil is having violent seizures and needs treatment. But his poor father is unable to afford that. However, a small contribution on your side can bring back happiness to these parents and help little Aahil lead a healthy life.

Together, we can help save little Aahil