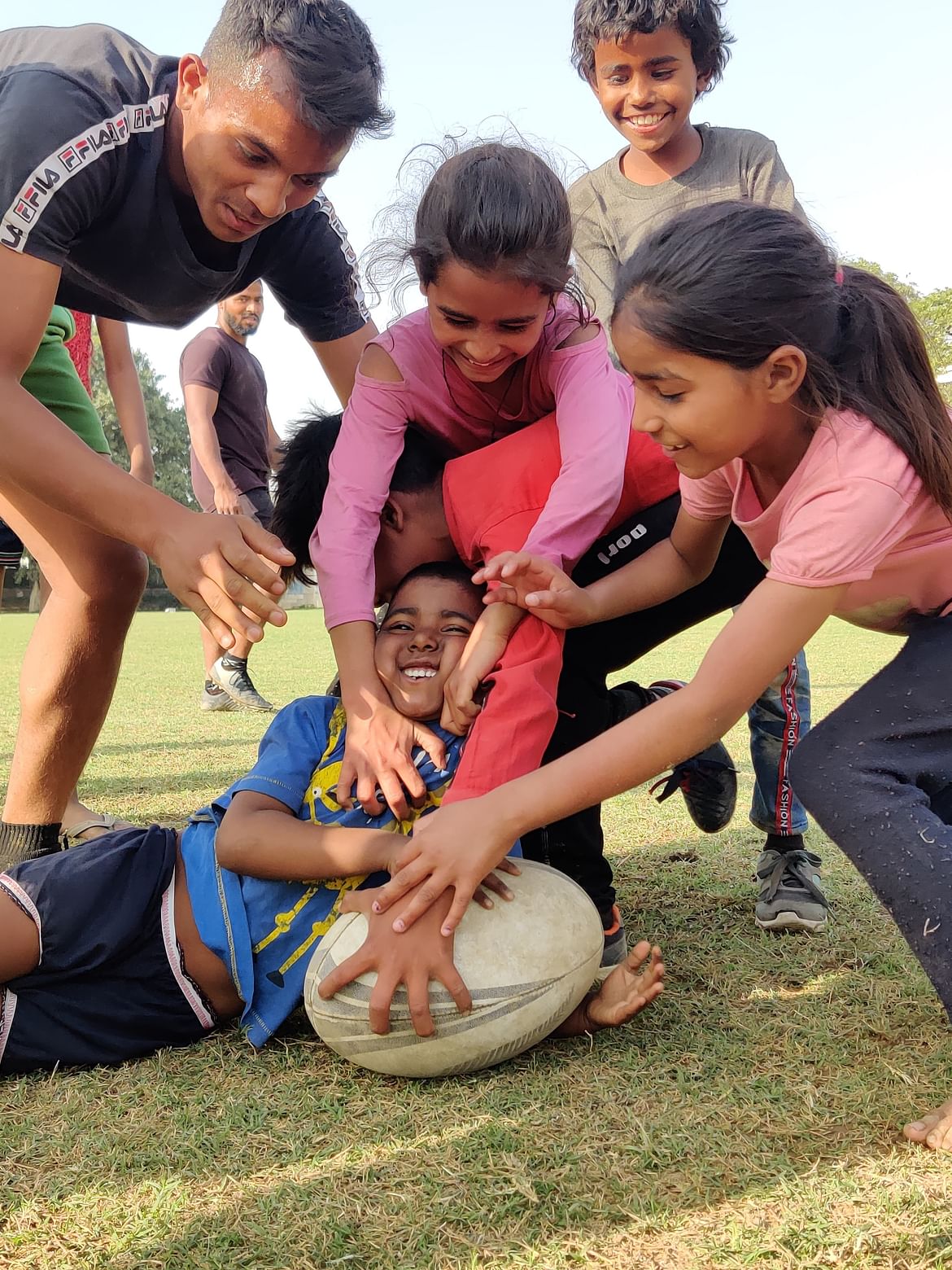 The Wolfpack is a rugby institution based in Delhi. This organisation functions as rehab for the survivors of social disorganisation and helps them to develop aspirations and emotional intelligence and enable them to restart their lives with full potential. Our pack is 100 children strong, with people from all age groups. Apart from rugby training, Wolfpack believes in providing an all-around development for these children. This includes proper access to education, entrepreneurship training and placement in different fields. They are also trained regarding positive social media, consent control choice, and conflict management to create a force of Peacemakers.
Budget for 1 Year

We faced major difficulties in creating the team as our players who unexposed ecosystems restricted them to do more and be more. They were involved in crimes, begging, picking rags, drug peddling, etc. After a rollercoaster of challenges, pain, and sweat we have had some great success stories.
Pinki (15 years), lives under a flyover in Sarita Vihar, currently in 10th grade goes to a government school in her locality. Pinky is the youngest and the only child who could reach high school out of her 5 other siblings. Her father didn't earn anything for the longest time and her mother, Savitri Devi, being the bread-earner had to leave her hometown for better education and livelihood opportunities. Some members of the family were involved in drugs who were supposed to be the bread earners of the family,

Pinky was only 7 years old started picking rags to earn a few pennies for her family every day and cater to the needs of the family. Her mother who now works as a domestic help admitted her to a nearby government school when she was 8 but she continued to pick rags in Jasola and had often begged on traffic signals too

At home and outside too, Pinky had experienced neglect, violence and all kinds of abuse. The trauma instilled severe anger, frustration and helplessness. Conditioned to counter violence with violence, she grew up as a very aggressive girl and has been labelled as a rowdy, bully and ill-mannered child who never behaved like a 'normal girl'

She started playing Rugby three years back and she got a chance to throw all her hostility and angst out on the field. For the first time, her entrenched endurance and resilience were productively utilised to hone game skills and eventually she emerged as the best female player in the pack.

Her off-field community engagement has also been very active too. She’s been an advocate for women rights and has raised her voice against injustice towards young girls and women. Well-versed with child rights centric programming, she has inspired many young girls to join the 'Rugby for change' journey, giving them a doorway to unleash their full potential for good

Essential life and leadership skills which she learnt on the field, she successfully translated them into her actions and behaviour.

She’s one of the leaders for the girls' group and takes the lead to train new joiners. She conducts focussed discussions around breaking gender myths and norms; ob child rights and seeking legal support. She completely owns her narrative of learning life through Rugby and leads a strong community action plan to work with families living on the streets.

Earlier this year, Pinky also participated in the global life skills olympiad organised by Harvard School of Life Skills and secured 467 global ranks out of 4.5 lakhs students who participated from 67 countries.

Pinky’s story got featured in Hindustan Times, Times of India and BBC Media. She was the youngest speaker at a mental health awareness panel organised by the Red Door and CREA.


Pinky loves to dance and participates in extracurricular activities very actively. She aspires to be an international rugby player and has pledged to get her family out of the misery they have always lived in.

About the Campaign Leader- Abu Sufiyan

Abu Sufiyan is an engineer the founder of Purani Dilli Walon Ki Baatein. He is currently working as a digital media consultant for Futurebit Creative Labs, and managing Delhipedia- Delhi’s fastest-growing online community. Sufiyan believes in belonging to the roots, caring about the community, taking pride in his lineage and giving it back to society in a thousand ways.

His Previous Campaigns in Media:

We have been facing a major issue with the funds since things like field access, playing kits, diet support, action projects workshops, require proper funding and lately, we haven’t been receiving enough to meet our budget. Our long term goal is to build a self-sustaining model run by our Beneficiaries/Street Entrepreneurs. Currently, we are looking for a gross donation of INR 6,00,000. For a cause of ours that celebrates the spirit of sportsmanship and community building, no amount is small. We are accepting a minimum of INR 100. All donators will be able to avail of tax exemption benefits under 80G and 12A.