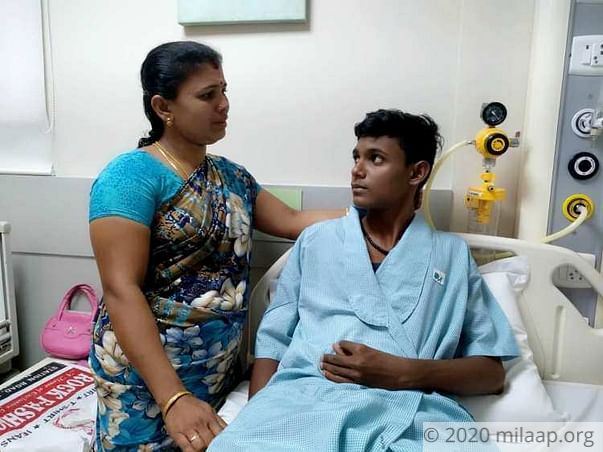 I live with my husband and three children in a village near Trichy. My world begins and ends with them. My husband and I never had the luxury of having an education. I work, dream and live only to give the best to my children. Shiva is one among the very few boys in my village to have got seat in an engineering college in merit. I thought all our sorrows have come to an end but the journey has just begun. Heart disease has robbed our happiness and dreams completely.

My son lives in an isolation. Heart disease has ruined his teens because it did not allow him to have friends of his age, because he gets tired very easily and can't play or talk for a long time. The hardest part is keeping his life as normal as possible. Whenever his health takes a down turn, I try my best to give him hope but my words do not have the power to take away the pain and sadness in his eyes. I just wish his heart disease would just vanish.

When he turned 13-year-old, he began complaining of shortness of breath, chest pain and palpitations. I took him to a hospital. Doctors said he has only a single functional ventricle due to lack of a heart valve. I almost collapsed when I learnt that his life is in danger. He was on medications for 2 years but it did not help him.  Later, I borrowed money from everyone I knew and sold everything I had and got his operation done. I had to start everything from scratch but I was glad that my son is saved from this dreadful disease. I was hopeful that he can live a normal life.


Siva had his heart surgery years ago, but he is fighting the disease again

Siva is 19-years-old now. He was doing well in his college, he scored good marks. Suddenly, he began to show that familiar symptoms. He suffered from breathlessness often.  He couldn't be regular to college. He never told me in the beginning. I don't know how long he was keeping to himself. Over the days, he became very tired. He couldn't even talk continuously.  It is an overwhelming experience.

My son has stopped going to college now, he is unable to focus on anything. Our world has shattered, our lives are not the same anymore. I'm not able to bear when he complains of chest pain. My other children  Pavithra (14), Selva (11) watch him with fear. They don't know what he is going through but they are aware that he is in danger. His world is shrinking, he does not come out of his room. I fear that he has lost the trust and has accepted his fate.

How can I just accept his fate? I'm willing to do anything to save him but I'm helpless. Doctors say that he has to get his next surgery done at the earliest. His condition might turn fatal without a surgery. My son has not asked me even once to save him but I knew that he desperately wish to live. He has a lot of dreams. He is aware of the family situation, he knows I do not have enough money. Guilt and fear are choking me to death. I do  not know whom to turn to help.

After my son's first surgery, I had to borrow money money for my husband's operation. He had stones in his kidney. He became very sick after the operation, he has severe diabetics. He is a driver, he goes to work whenever his health permits. Despite his condition, he is trying hard to earn money for our son's surgery.

It costs Rs 2000 every time for the check up, We come all the way to Chennai from our village. We borrow money even for the check up. How can I ever manage to get money for his surgery? My son is my life,  he is the pillar of strength to our family. He is a very responsible boy, he is very kind to others. He deserves a life. With him by our side, we can overcome anything in life. Without him, there is no life for us.

Siva with his father Raju and Mother Murugaselvi

My husband earns Rs 7000 per month on an average. He is the sole bread winner of the family. I have started to do tailoring at home to get some money but it doesn't fetch me much. No matter how much we work, we can't imagine earning money required for the surgery. Surgery requires Rs 5 lakhs and we are running out of time already. Siva is longing to live a normal life and complete his studies. He cries in silence. Please support him. Your support cans ave his life,

UPI: givetomurugaselvi@yesbankltd (Copy to clipboard)
Or
Click here to read the instructions before you make a bank transfer. 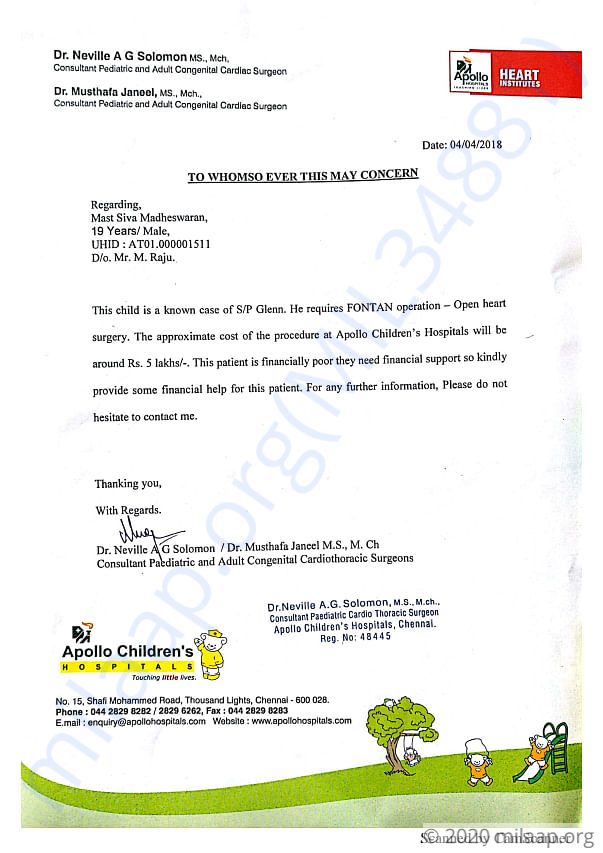 UPI: givetomurugaselvi@yesbankltd (Copy to clipboard)
Or
Click here to read the instructions before you make a bank transfer.

Report fundraiser
See how thousands are crowdfunding for their causes on Milaap
Rs.23,735 raised 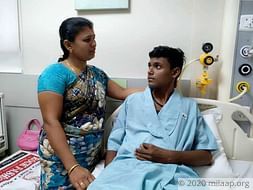