Single Mother's Son Is Fighting For Life In ICU After He Met Accident | Milaap
This is a supporting campaign. Contributions made to this campaign will go towards the main campaign. 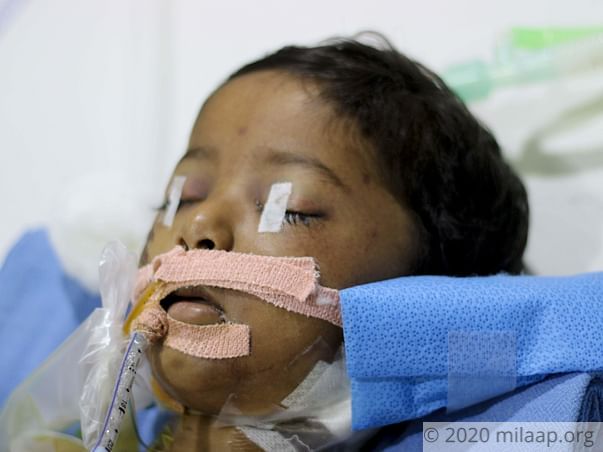 Life was never that easy for Husaaindee after her husband divorced her and took their two daughters Nikkhat (10) and Zikra (6) along with him, leaving Hussaindee with their son Shaikh Nadeen (4). Little Shaik Nadeen was just months old when his father deserted him. And Hussaindee who was once completely dependent on her husband, was now gaining the courage to look after her son on her own. But life took a terrible turn for Hussaindee when her son was involved in a tragic accident.

Little Shaikh Nadeen was crossing the road after buying his favorite lollipop when a truck hit him. Shaikh suffered severe injuries and for the past 14 days has been battling for life in the ICU, while his mother is begging everyone she knows to help her save her son.

After Hussaindee’s husband and daughters deserted her, she found happiness in her son. Shaikh just started going to school and he used to always excited about telling her mother everything that happened in school. It was Christmas break and as Shaikh was bored of sitting at home all day, he headed out to buy himself his favorite lollipop. ‘I was at home doing my work when I heard cries of our neighbors calling out Shaikh’s name. I ran out and saw my son lying on the ground, his body covered with blood.’ recalls Hussaindee as she looks at her son who is lying unconscious in the ICU. Shaikh was immediately taken to the hospital in their village near Khammam, Telangana soon after the accident.


“The doctors told that Shaikh’s condition is very critical and suggested us to take him to Hyderabad (Telangana) for better treatment. It was one of the longest journey I’ve ever had in life. He was profusely bleeding from his ears and nose. Every minute felt like an hour and I was constantly praying for my son to make it to the hospital.” - Hussaindee, mother

Little Shaikh was immediately taken to the ICU. He had a fracture in his backbone and his lungs are severely injured. He also had internal bleeding near his liver and genitals. He is currently on ventilator support and needs to stay in the intensive care for 15 more days to recover from this fatal condition.

A tailor by profession, Hussaindee used to work hard to provide his son with a decent life by earning a meagre income of Rs 200 per day. But ever since Shaikh met with a tragic accident, Hussaindee has spent Rs 3 lakhs so far by borrowing money from others. But now she has exhausted all the money she borrowed and is desperately struggling to save her son.

Hussaindee’s only source of happiness, her son Shaik Nadeen is now battling for life in ICU. Shaik just started learning alphabet and numbers when a tragic accident brought him to the brink of death. Hussaindee can’t help but cry looking at her go through all this pain. She needs your help to save her son.

UPI: rzpy.givetomlpshaiknad004@hdfcbank (Copy to clipboard)
Or
Click here to read the instructions before you make a bank transfer. 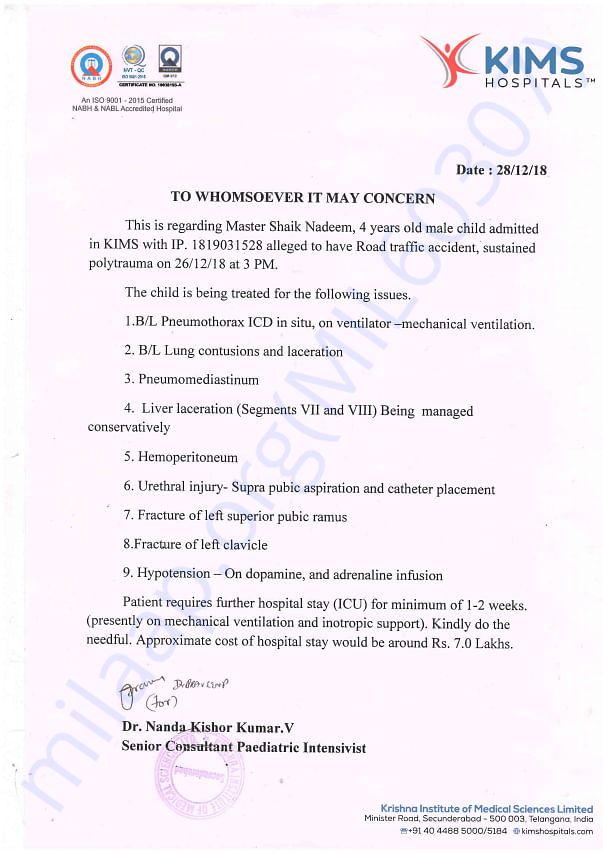 UPI: rzpy.givetomlpshaiknad004@hdfcbank (Copy to clipboard)
Or
Click here to read the instructions before you make a bank transfer.

We would like to inform that Shaik Nadeem recently underwent for an urinal surgery for the second time as the first one didn't go well. He is doing well post the surgery and is at home and has been scheduled an appointment with the doctor after a week to track the progress. After this his further line of treatment will be to cure the blood clots which have developed in his head.
We wish him strength and speedy recovery.

We thank you for your love and support. Shaik Nadeem had a urinal surgery recently and the doctors have attached two pipes after the surgery. The doctors have told that he needs care for more 2 to 3 months to remove the pipes.

Again, thank You for your support and please pray for him

Thank you all for you kindness and love that you showed in supporting my son.

Shaik Nadeem is currently at home. There is a tube attached to pass urine and doctors have advised not to remove the tube for another 3 months. He is not able to walk or sleep peacefully because of the same. He is also having feces problem.

I'm humbled by the love and care shown towards my son's cause. Pleas continue to share the campaign. 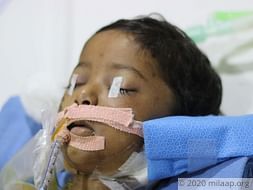