This Young Father Of 3-Year-Old Needs Help Urgently | Milaap
This campaign has stopped and can no longer accept donations. 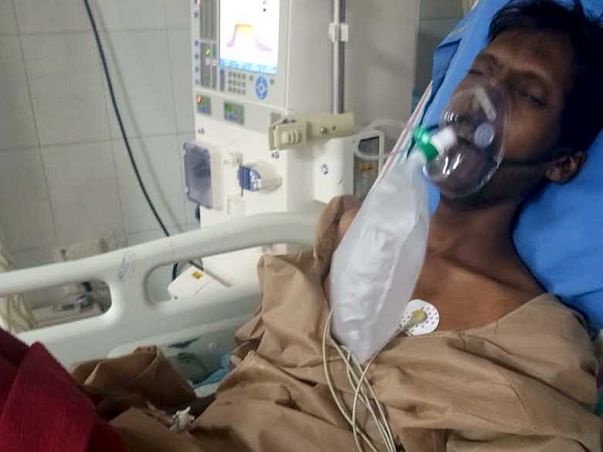 Young Venkat Rao’s kidneys have both failed and he had done renal transplant in 2014 with his mother as donor. His friends pooled in money for this as he is not financially sound. Unfortunately it was detected that the kidney stopped working since 6months. He continued to do dialysis from then on. But he fainted on 5th Oct after developing fever and cold and was admitted to ICU. His wife, 3-year-old daughter are completely helpless. He needs cash for the current treatment to come out of ICU to normalcy and also for the future kidney transplant..

Happy Life:
Young Venkat Rao is happily married and the couple were expecting their first baby in 6 months. Venkata Rao is a very close friend of mine, has studied till 10th Std after which he started working in a medical shop for about close to 15years. He discontinued studies after 10th due to his family circumstances and started Rice business and medical shop - eventually both of them went in loss and literally struggling to get any regular income. He has aged parents living in Andhra, they were small farmers and have a very low income. Venkat rao is a very jovial, kind person loved by all his friends and family.
Shocker of life:
In spite of all the financial issues, Life was going really happy for them. Venkat started experiencing weakness quite frequently. In May’2014, when one of the friends took him to hospital for checkup, the shocker came – it is diagnosed that both his kidneys failed. He was put under Haemodialysis three times a week after diagnosis. As his condition was quite worse he had to undergo Kidney transplant. His mother came forward to be the donor to donate her Kidney to save his life. As Venkat rao had no financial assistance, some of his friends pooled in the money needed (close to 2 Lakhs) and the surgery was done in Sep’2014. Ironically, during the time of Surgery, his wife’s delivery date was also nearing. Operation was declared a success and the couple was blessed with a daughter. Venkat continued with the medication with utmost care and had strictest diet as advised by doctors..

Life after Surgery, Hopes of Building a great future for his kid:
Financial situation (like always) had been a problem for Venkat. He forgot all his sorrows by playing with his bundle of joy. His wife and family provided great support throughout for him and stood by him. He could not go to work initially because he was too weak but later started doing into job that was lighter as he has to plan for her kid’s school. His kid got admitted into Pre-kg in school this year again by his friends who were there consistently helping him financially from year 2014 the moment he got diagnosed with renal failure. He started enjoying every moment of the school life of his kid. The kid enjoyed her daily school life with the rest of the kids.

Relapse:
It seemed like Venkat had got the happy ending but suddenly after ~4 years of surgery he had started experiencing difficulties again in 2018… He had frequent instances of sickness, fever, headache, vomits, cold attacking. When he went for checkups the bomb fell on the family as the doctors concluded that the transplanted kidney is not working. Venkat and the family are totally shattered. There were no clear reasons provided.
He had no other choice but to do dialysis since 6 months. Weekly 3 times dialysis and medicines cost itself is coming to close to 7000 and he is struggling to meet his daily needs. He doesn’t have any health insurance policies etc. He is not having any financial assistance from other sources. Because of lack of money he has been continuing with the dialysis process.
But he fainted on 4th Nov night after developing fever and cold and was admitted to ICU. His wife, 3-year-old daughter are worried, completely helpless and waiting for Venkat to come back home.


Venkat’s future hopes were all centered around his little daughter and wife. Giving his daughter a good childhood, studies was important to Venkat. In spite of long term sickness since past five years, he always kept himself positive. But his dreams were cut-short because of the kidney disease. He needs money for the current treatment to come out of the ICU back to normalcy and also for the future kidney transplant. If he doesn't get a transplant soon, his health will fade away and shatter his life and future hopes of his little daughter.
How you can help
His efforts and his strength will all be in vain if he succumbs to kidney failure. Your support will help Venkat save himself for his young daughter.
2014 Lab report - Failed Kidney - creatinine 20+ against 1.3 levels 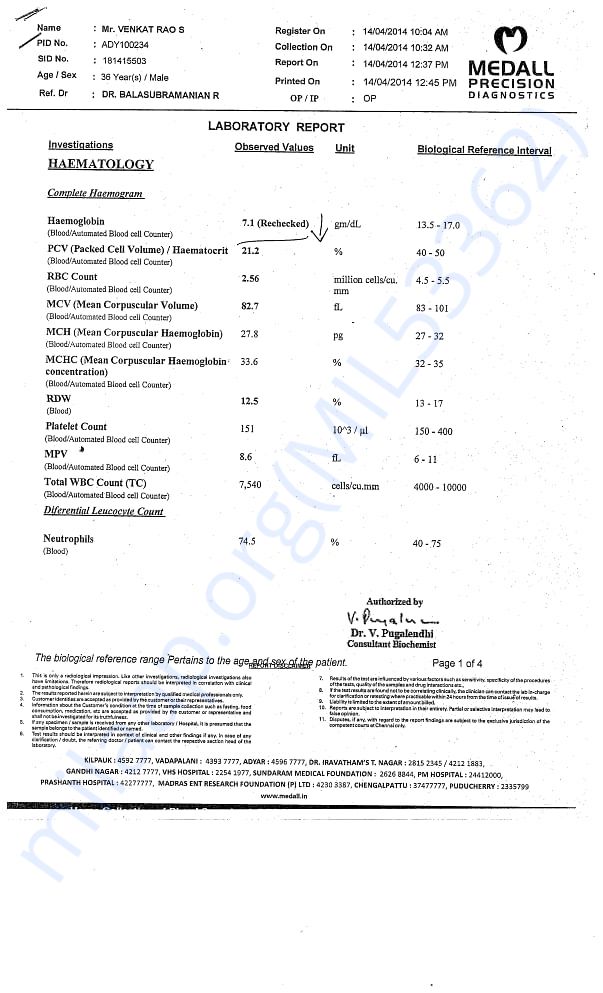 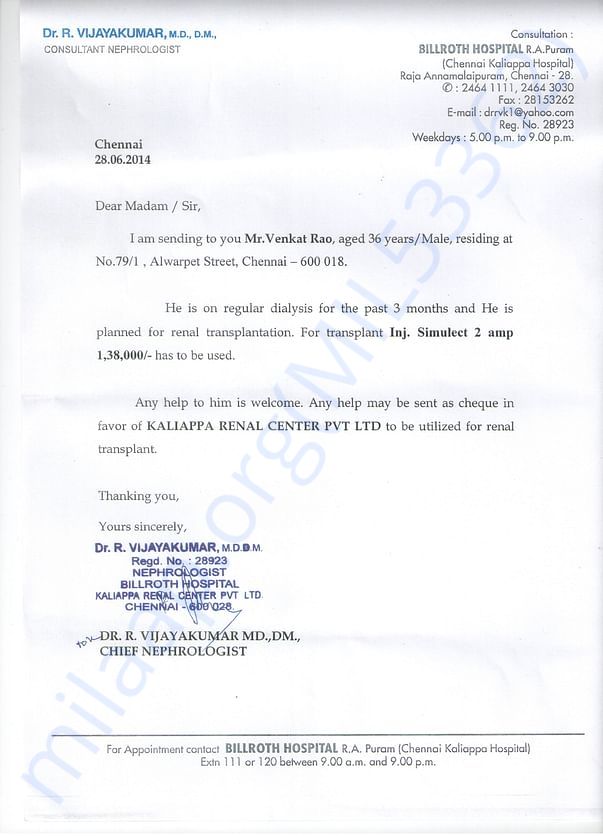 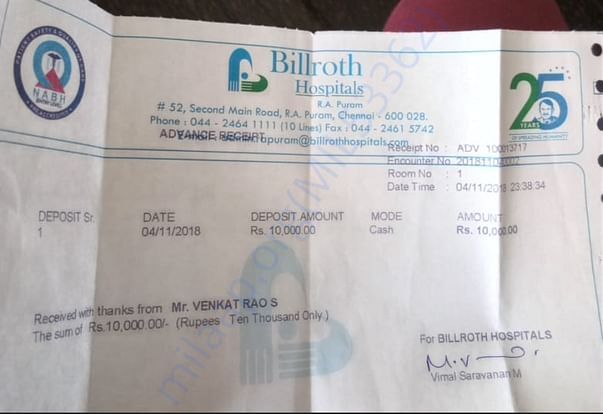 Thanks a lot for all your support till date. We are using the remaining fund (after Venkat's passing away) for meeting the needs of his family - his small kid and wife...

Thank you once again!
With deep anguish and pain we would like to inform that our school friend Venkatrao is no more. He left us early hours yesterday early morning in ICU of hospital. He fought till the last minute valiantly like a true fighter. The donation collected from all of you here was instrumental in paying the discharge fees. We thank all for the timely  help. We are looking at immediate next steps like helping their family - his wife and tiny kid , so small she doesn't understand  what's happened to her father. Please pray for venkat and the family. We are actively pursuing the fundraiser to collect possible funds to help the family in this need of the hour in memory of Venkat.
Dear All - we would like to thank all the donors who had contributed immediately to bring in a difference to Venkat , his three year old daughter, his wife and his entire family in this need of the hour. At the time of admitting in the hospital he was completely unconscious, heart beat was out of control . Since yesterday there is an improvement - Heart rate brought down to normal without help of medicines (natural heart beat is evidenced now). This wouldn't have been possible without each of your support. However, there is also a bad news as the doctor has yday diagnosed Jaundice. However, the family is hoping and positive that he will get back to normalcy soon with continued treatment and support from all the well wishers. Thanks a lot again for your warm gesture and pray for Venkat's speedy recovery and normalcy.
Donate

You are sending a message to
Hareesh
Go back 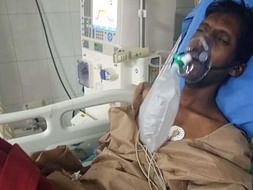