On World Water Day 2019, we started with Gavi Kere, a 3-acre lake in Anekal Taluk of Bengaluru South. With your generous and timely support, we were able to raise Rs. 17 lakh to transform the lake. From designing, cleaning, desilting, stone pitching to overall construction, it took almost 45 days for Anand and his team to complete the work at the lake. And then began the wait for the rains. With the delayed monsoon in 2019, it took time for the lake to fill up, and it now stands with about 70% water. 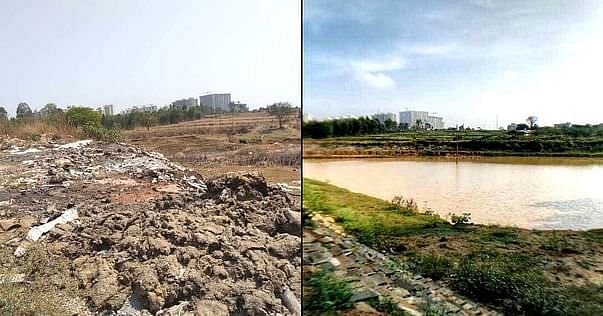 With World Water Day 2020 around the corner, we are happy to announce that the Lake Revivers Collective is moving to its next project - the Hadosiddapura lake located in Sarjapur, Bengaluru.

Unlike his previous projects like the Kyalasanahalli Lake and Gavi Kere Lake, where Anand concentrated on reviving a series of lakes belonging to the same zone and stream, to ensure each one supports the other, this lake is the complete opposite.

“Hadosiddapura lake is an independent catchment lake, which means it does not flow into any other lake directly. But, that does not mean, reviving this is an easy task. When I first came to analyse the condition of this lake, I realised that it was completely dried but filled with sewage water that comes through several sewage inlets connected to this lake,” shares Anand. 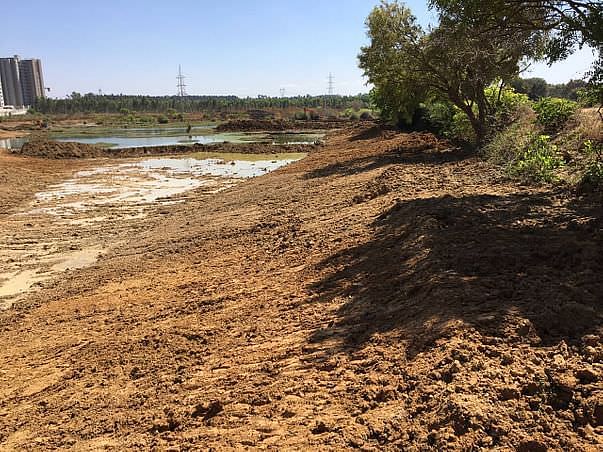 He took up the project of reviving Hadosiddapura lake in January 2020 and hopes to complete it prior to the monsoons, by the end of May.

Although the lake is spread across an area of 36-acres, Anand has managed to begin the work on 29 acres only as the rest of the area has been encroached upon. “A major problem with such lakes is the high incident of encroachment. We are trying to find our way out of this problem and are taking every possible measure to get the land back so that it can be transformed into a forest lining around the lake. It will take time, so at first, we are pouring all our efforts to revive the spot we already have,” he shares.

With the phase one of desilting already done, Anand has begun the phase 2 of cleaning and designing with the help of residents and school students of Bhoomi Network, an institution that has been trying to revive the lake for the past few years.

“We have created mud bund partitions to separate the sewage treated water and rainwater within the lake surface area in order to maintain the water quality. While the sewage water is used to water plants around the lake bed, the rainwater is used for cows, birds, fishes and other uses by residents around the area. With every lake revived, the impact is not just felt in the long term, but also in the common lives of people living around it,” Anand adds.

It was this principle of bringing a holistic transformation that pushed Bhoomi Network to support this cause and donate a sum of Rs 25 lakh. But the overall project needs Rs. 50 lakh more. The Better India, as part of the Lake Revivers Collective has also extended its support to the cause and is helping Anand raise the remaining amount through this crowdfunding campaign. Anand’s journey of transforming Bengaluru for good is a sum total of all our efforts and help, because, in this line of work, every single step counts and all of us can become changemakers.
__________________________________________________________________________________
“City of burning lakes: experts fear Bangalore will be uninhabitable by 2025” – The Guardian
“Is India’s Bangalore doomed to be the next Cape Town?” – BBC
“Bengaluru is dying a thirsty death way too soon, say experts” – The New Indian Express

News and headlines such as these have kept Anand, a 38-year-old techie from Bengaluru, aware of his surroundings for a long time now. Since the time he rejuvenated his first lake, the enormity of the situation, and the need for someone to take action — became crystal clear for him.

“Lakes are the eyes of the earth. They can see. They can monitor. They can tell us about the ecology of the region,” says Anand, who is all set to rejuvenate 45 lakes in the city by 2025. And he has already started the hard work, single-handedly.

Once dotted with numerous beautiful water bodies that helped it earn the name, ‘city of lakes’, Bengaluru is now always in the headlines because of how a lake is frothing here, another lake is being encroached there, and the stench of yet another one is making life miserable for those living nearby. From 262 water bodies in Bengaluru in 1960, the figure has declined to 81, of which only 34 are currently alive.
In a city bubbling with pollution, over-population, traffic, and dying lakes — Anand is a man on a mission. Someone who can talk about lakes, environment, and the power of one for hours on end and who has shown that if we as individuals get down to it, we can save this city and the environment at large. And we can start today!

On February 15, 2019, The Better India published an article about Anand’s work. That single story about that single man’s initiative, opened the floodgates of responses from across the country and the world — of people and organisations who want to join him, who want to help, and who want to learn from him.

Our own passionate interest in doing something for the environment led us to a meeting with Anand — one that led to the birth of Lake Revivers Collective. Inspired by all the amazing responses we received, we asked Anand if he would like to work with us and our readers towards achieving his goal. And without a blink of an eye, Anand said yes.

The Lake Revivers Collective is an initiative by which The Better India and its readers will help Anand reach his goal of saving Bengaluru, one lake at a time.

On World Water Day 2019, we are starting with Gavi Kere, a 3-acre lake in Anekal Taluk of Bengaluru South, which will be transformed into a model lake with the help of your contributions.

Speaking to The Better India, Anand shares details of a few recent successes that gave Bengaluru some of its prized lakes back.

The first, he says, was the 36-acre water body, Kyalasanahalli Lake near Anekal, which was restored in only 45 days! Anand designed and executed the rehabilitation procedure with the help of nearby communities, including several techies from Electronic City.

“We began the work on April 20, 2017, with a budget of Rs 1 crore and 17 lakh, provided by Sansera Foundation. We needed help and reached out to the nearby community with the help of a senior citizen, B Muthuraman (74). Together, we covered almost 400 houses to spread awareness. Eventually, people began to show up, and joined hands to work long hours to make this possible,” says Anand. He was Sansera’s CSR head at the time.

Without the help of industry experts, architects or engineers, Anand, a mechanical engineer, along with fellow citizens, removed almost 4 lakh cubic meters of mud from the lake.

This mud was then used to create five islands of 110 diameters each, all across the lake, in only ten days. These islands now serve as nesting areas for birds, with a huge tree planted in the middle for nests, as well as fruit-bearing and flower saplings around.

The next step was to remove around 1 lakh cubic meter of mud from the lake and fill it with water. “When I first visited the spot, it was a disaster. Such a huge lake had dried up, and villagers were using it as a playground or dumping their waste. From that, we went on to create an oasis,” exclaims Anand.

Two canals of the stormwater drain were diverted 1.8 km away, and then the September rains showered their magic, restoring life to a lake which had been dead for the past 35 years.

The work eventually followed with the plantation of saplings and the creation of two Japanese Miyawaki forests on the lake. “It’s a unique procedure, and we created forests of almost 25,000 sq feet with more than 5,000 plants. A total of 1,500 volunteers came together to plant trees in the forests in a record time of 1 hour and 45 minutes,” says Anand.

He adds that the design was made keeping in mind the long-term aspects of sustainability. And so, the area surrounding the lake was not only protected by plants but also turfed with natural grass to save it from soil erosion.

On June 5, 2017, the lake was entirely transformed, paving the way for Anand, a lake conservationist, to save the rest of the lakes, independently.

“After completing Kyalasanahalli Lake, I had found my calling, and so, I left my job, and began to work on other lakes, all on my own. The next stop was Vabasandra Lake near Bommasandra,” he says.

With funding to the tune of Rs 75 lakh from Hewlett-Packard (HP), he began the work on April 5, 2018, and in two months, the 9-acre area of the lake was transformed into a 50 ft deep water reservoir.

Following this, the next target was 16-acres of Konasandra Lake.

“It was in a situation worse than the foam-filled Bellandur lake when we found it. The pollution had changed the water to a toxic gel-like substance, making it one of the most poisonous lakes in the city. This was the doing of the industries and pharmaceutical companies in the area. But then, one of them, Hikal Ltd, decided to alter the damage and helped us with a fund of Rs 81 lakh to rejuvenate it,” Anand proudly says.

Explaining his process and plan for the next 6 years, Anand says that he has divided Bengaluru into 4 zones, the first one being in the south. “Zone 1 has the Hennagara lake. About 11 streams flow into this lake and each stream is made up of 3-5 smaller lakes. This is how I have reached the number 45. Gavi Kere is the first lake of the first stream in this zone. The other two on that stream have already been revived.”

And this is what we are starting with. The revival of Gavi Kere needs Rs. 15 Lakh for the following:

Rs. 8 Lakh: Desilting and Bund-Strengthening of the lake.
Rs. 4 Lakh: Inlets and Outlets Modification
Rs. 3 Lakh: Setting up of water inlet concrete pipes all around.

Join The Lake Revivors Collective and help save Bengaluru, one lake at a time.